Many around the world believe the global balance of power is shifting. In 15 of 22 nations, majorities or pluralities say China either will replace or already has replaced the United States as the world’s leading superpower.

This view is widespread in many nations where the U.S. is popular, as well as in nations where anti-Americanism runs high. And it has become considerably more common across much of the globe over the last two years. 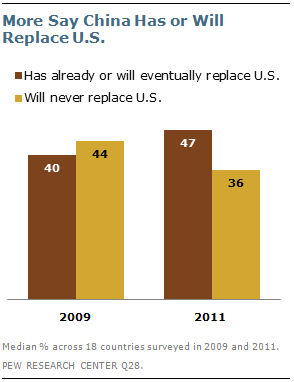 Of course, the U.S. is still the world’s largest national economy, and majorities or pluralities in 15 of 22 countries say the U.S. is currently the top economic power. However, the view that China occupies the top position is much more prevalent now than it was in 2009. In particular, Western Europeans increasingly see China as the economic frontrunner – and they generally consider this a negative development.

In addition to concerns about China’s economic prominence, many in Western Europe and elsewhere react negatively to the idea of China as a military superpower. Majorities in most of the nations surveyed say it would be a bad thing if China became as powerful militarily as the U.S. However, this view is not shared everywhere – for instance, more than six-in-ten Palestinians and at least seven-in-ten Pakistanis and Jordanians would welcome a world where China’s military strength matched America’s.

Will China Become the Leading Power? 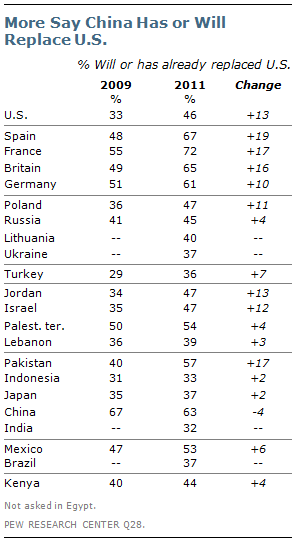 Relatively few people in the countries polled believe China has already replaced the U.S. as the leading global superpower, although more than one-in-five hold this opinion in France (23%) and Poland (21%). But large numbers in many countries believe China will eventually supplant the U.S.

Adding together those who think China either will or already has overtaken the U.S. produces solid majorities in Western Europe, and this view has become much more common since 2009. Two-thirds in Spain think China will or already has become the dominant power, up from 48% two years ago. Similar increases have taken place in France (+17 percentage points) and Britain (+16 points).

In the Middle East, over the last two years, Jordanians and Israelis have become much more likely to see China in the leading role. Currently, 47% in both countries express this view, as does a majority of Palestinians (54%).

The percentage of Pakistanis who believe China will replace or has already replaced the U.S. has also grown significantly, rising from 40% to 57%. Not all of China’s Asian neighbors believe it will assume the top spot, however. Most Japanese (60%) and a plurality of Indonesians (46%) think China will never replace the U.S.

Similarly, a 47%-plurality of Brazilians says the U.S. will never be replaced by China. However, a majority (53%) of Mexicans now see China supplanting their neighbor to the north.

In China itself, a strong 63%-majority believes their country already has or will become the leading global power, although this is down slightly from 67% in 2009. The American public is divided on this issue: 46% think China has or will overtake the U.S., while 45% say this will never happen. Republicans (48% never) and Democrats (46%) are slightly more likely than independents (40%) to say China will never replace the U.S.

The Economic Balance of Power 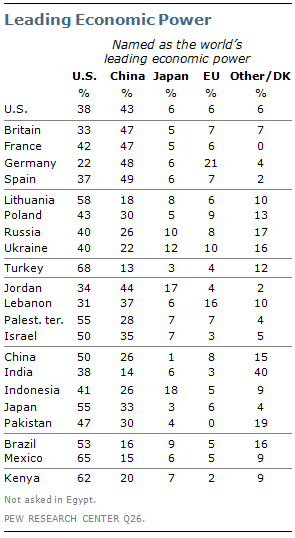 The economically advanced nations of the west see this issue differently, however. Roughly half in the four Western European nations surveyed name China as the top economic power. A 43%-plurality of Americans think China already holds the top position, and there are essentially no partisan differences on this issue, with slightly more than four-in-ten Democrats, Republicans, and independents placing China in the top spot.

Jordanians and Lebanese also tend to name China, rather than the U.S., as the world’s leading economy.

Germany is the only country where more than one-in-five believe the European Union is the world’s major economic power. 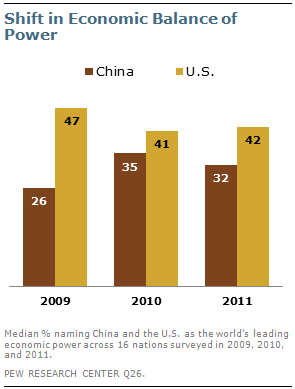 There is no country in which at least 20% name Japan as the leading economic power, although 18% express this view in Indonesia and 17% in Jordan. In 2010, a quarter of Russians placed Japan in the top position, but only 10% do so now. 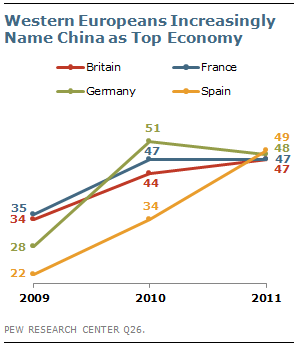 Big changes have taken place, however, since 2009. Looking at the 16 nations surveyed in each of the last three years, the median percentage naming China as the world’s leading economic power has risen from 26% in 2009 to 32% today. The percentage naming the U.S. has declined from 47% to 42%.

The shift since 2009 has been especially large in Western Europe. The percentage naming China as the top economic power has more than doubled in Spain and has risen by 20 percentage points in Germany. 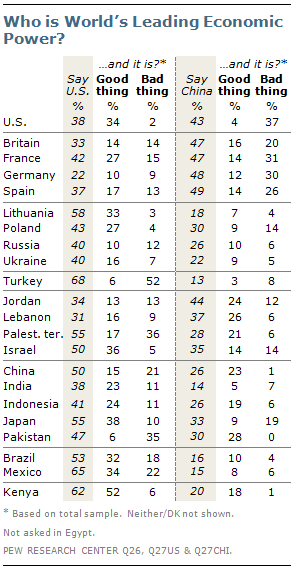 Generally, American economic might is viewed positively. In 15 countries, those who name the U.S. as the leading economy tend to say this is a good thing. There are only four nations – Turkey, the Palestinian territories, Pakistan and China – where those who name the U.S. tend to believe America’s status as the top economy is a bad thing.

Views about Chinese economic power are more mixed. In 12 countries, those who name China as the leading economy on balance think this is a good thing, while in 9 countries they tend to see this in negative terms.

Throughout Western Europe, those who see China as the top economic power tend to believe this is a bad thing. In contrast, in France and Spain, those who name the U.S. generally think it is good that America occupies the top spot, while in Britain and Germany views on this are divided.

Similarly, Japanese respondents who name China as the top power generally see this as a negative development, while those who name the U.S. believe it is good that America is the economic leader.

The pattern is reversed in Pakistan and the Palestinian territories: Those who say China is the leader tend to say this is good, while those who name the U.S. generally see American economic power in a negative light.

China as a Military Superpower 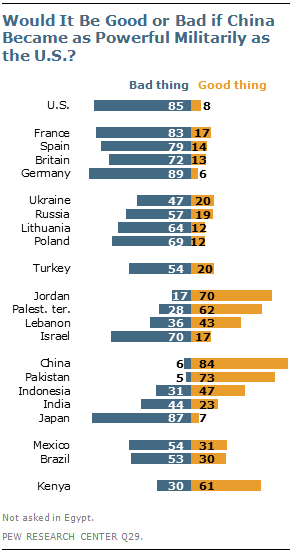 In most of the nations surveyed, there is little enthusiasm for China becoming as militarily powerful as the U.S. Majorities or pluralities in 15 of 22 nations say this would be a bad thing.

In the U.S., Japan, Israel and all four Western European countries surveyed, at least seven-in-ten hold this view, as do more than six-in-ten in NATO members Poland and Lithuania.

However, in five of the six predominantly Muslim nations where this question was asked, majorities or pluralities embrace the idea of China matching America’s military strength. The exception is Turkey, where a 54%-majority says it would be bad if China became America’s military equal, up steeply from just 29% in 2005.

Most Kenyans (61%) think it would be good if China rivaled the U.S. militarily, as does an overwhelming majority in China itself (84%).

Next: Chapter 2. Views of the U.S. and American Foreign Policy
← Prev Page
Page1You are reading page2Page3Page4Page5Page6Page7Page8Page9Page10
Next Page →