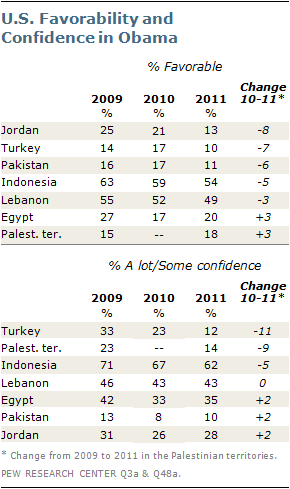 As President Obama prepares to make a major address on the tumultuous changes spreading throughout the Middle East, a new survey finds that the rise of pro-democracy movements has not led to an improvement in America’s image in the region. Instead, in key Arab nations and in other predominantly Muslim countries, views of the U.S. remain negative, as they have been for nearly a decade. Indeed, in Jordan, Turkey and Pakistan, views are even more negative than they were one year ago.

With the exception of Indonesia, Obama remains unpopular in the Muslim nations polled, and most disapprove of the way he has handled calls for political change roiling the Middle East. Moreover, many of the concerns that have driven animosity toward the U.S. in recent years are still present – a perception that the U.S. acts unilaterally, opposition to the war on terror, and fears of America as a military threat. And in countries such as Jordan, Lebanon, and Pakistan, most say their own governments cooperate too much with the U.S.

While the Arab Spring has not led to a change in America’s image, it has generated considerable interest and excitement, especially in the Arab nations surveyed. More than 85% in Jordan, Egypt, the Palestinian territories, and Lebanon have followed news about political demonstrations in the region, and in Arab countries there is widespread optimism that the protests will lead to more democracy. Most Israelis have also followed the political upheaval in neighboring countries, but they are divided over whether it will produce more democratic societies.

The survey, conducted by the Pew Research Center’s Global Attitudes Project March 21-April 26, suggests the enthusiasm for democracy displayed by protestors in Tunisia, Egypt and elsewhere is consistent with public opinion in majority Muslim nations.1 Democracy is widely seen as the best form of government, especially in Lebanon, Jordan and Egypt, where more than seven-in-ten hold this view. Moreover, people in the Muslim nations surveyed clearly value specific features of a democratic system, such as freedom of religion, free speech, and competitive elections. And publics in many Muslim countries increasingly believe that a democratic government, rather than a strong leader, is the best way to solve national problems. 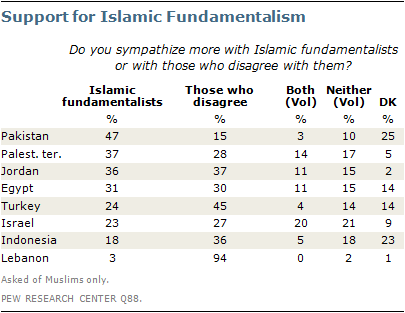 Ideas about the role of Islam in society vary across Muslim nations. In Pakistan, Jordan, and Egypt, solid majorities believe laws should be based strictly on the teachings of the Quran, while this is a minority viewpoint in Turkey, Lebanon, Indonesia, and the Palestinian territories. Views about Islamic fundamentalism also vary widely – in Pakistan for instance, Muslims tend to sympathize with fundamentalists, while Lebanese and Turkish Muslims favor those who disagree with fundamentalists. 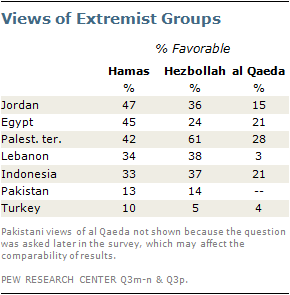 The poll also highlights the extent to which extremism is rejected in Muslim nations, although there are notable levels of support for radical Islamist groups and suicide terrorism in some countries. Al Qaeda is rated negatively by majorities in all countries, but more than a quarter express a positive opinion of the terrorist group in the Palestinian territories. There is no country in which a majority rates the radical Palestinian organization Hamas positively – still, it receives considerable support in Jordan and Egypt. Among the Palestinians themselves, Hamas is less popular than Fatah, its more secular rival.

The militant Lebanese Shia group Hezbollah receives majority support only in the Palestinian territories. In Lebanon itself, views of Hezbollah reflect the sharp religious divisions within that society. While nearly nine-in-ten Lebanese Shia offer a positive view of Hezbollah, nine-in-ten Sunnis and three-quarters of Christians rate the organization negatively.

In recent years, Pew Global Attitudes surveys have documented a decline in support for suicide bombing in a number of countries, and today the percentage of Muslims who say this type of violence is often or sometimes justifiable stands at 10% or less in Indonesia, Turkey and Pakistan. Support for these acts is somewhat more common in Arab nations, although there have been steep declines over the last decade in Lebanon and Jordan.

Palestinian Muslims, however, remain an outlier on this question: 68% say suicide attacks in defense of Islam can often or sometimes be justified, a level of support essentially unchanged from 2007. And in Egypt, support for suicide bombing is actually on the rise – currently, 28% believe it can be justified, up from 8% in 2007.

Next: Chapter 1. Opinions of the U.S. and President Barack Obama
← Prev Page
You are reading page1Page2Page3Page4Page5Page6
Next Page →