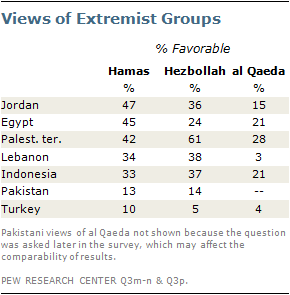 On balance, extremist groups tend to receive negative ratings in the predominantly Muslim nations surveyed, although there are significant levels of support for these organizations in many countries.

There is no country in which a majority has a favorable opinion of the militant Palestinian organization Hamas. Among Palestinians themselves, Hamas’ image has declined in recent years, and its more moderate rival Fatah is rated much more positively.2 Still, about four-in-ten Palestinians rate Hamas favorably, as do nearly half in Arab neighbors Jordan and Egypt.

Similarly, views of the Lebanese Shia Muslim group Hezbollah are on balance negative, but significant minorities rate Hezbollah favorably in several nations, and it is highly popular among Lebanese Shia and Palestinians.3

Majorities in Arab nations, Turkey and Indonesia all have a negative opinion about al Qaeda. The terrorist organization receives it strongest support in the Palestinian territories, where more than one-quarter give al Qaeda a positive rating. Views about al Qaeda leader Osama bin Laden followed a similar pattern: before his death, he was widely rejected among Muslim publics, although he was viewed positively by about one-in-three Palestinians.

There is only limited support for suicide bombing in most of these nations, although Palestinian Muslims are a clear outlier: 68% say this kind of violence is justifiable. And while in Lebanon support for suicide terrorism has declined since 2002 – as it has in many countries – 35% of Lebanese Muslims still say it can be justified. Moreover, in Egypt support for suicide attacks has gradually increased over the last four years. 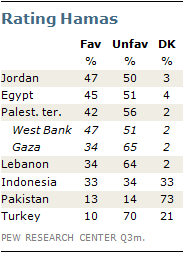 In Jordan, where Hamas receives its highest ratings, views about the organization are essentially divided: 47% express a favorable opinion, 50% an unfavorable one. Support for Hamas is higher among those in Jordan who identify as Palestinian (53% favorable) than among those who identify as Jordanian (39%). Overall, support for the militant Islamist group has slipped considerably in Jordan since last year, when six-in-ten said they viewed Hamas favorably.

By a narrow margin, Egyptians give Hamas more unfavorable (51%) than favorable (45%) ratings. This is a shift from two years ago, when the balance of opinion was positive (52% favorable, 44% unfavorable). 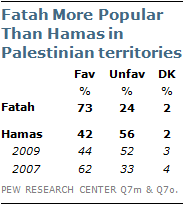 Roughly four-in-ten Palestinians (42%) express a positive view of Hamas, although this varies considerably across the two regions that comprise the Palestinian territories. In Gaza, which is controlled by Hamas, only 34% give the group a positive rating. In contrast, Palestinians living in the West Bank – which is controlled by Hamas rival Fatah – are almost evenly divided: 47% have a favorable view and 51% have an unfavorable opinion.

Hamas’ popularity has waned since 2007, when about six-in-ten Palestinians held a positive view of the organization. And it is now considerably less popular than the more secular Fatah, which receives a favorable rating from 73% of Palestinians, including more than seven-in-ten in both the West Bank (72%) and Gaza (75%). Fatah leader, and Palestinian president, Mahmoud Abbas is also well-regarded: 65% of Palestinians say they have confidence in him to do the right thing in world affairs, including solid majorities in both the West Bank (61%) and Gaza (73%).

In Lebanon about a third (34%) view Hamas favorably, although opinions vary considerably across religious and sectarian lines. Roughly seven-in-ten (71%) Shia Muslims express a positive view of Hamas (which is a Sunni organization). It receives significantly less support among the country’s Sunni Muslims (13% favorable) and Christians (21%).

Three-in-ten Israeli Arabs (30%) say they have a favorable opinion of Hamas (1% of Israeli Jews give Hamas a positive rating).

Outside of the Arab world, Indonesians fall almost equally into three groups: one-third view Hamas favorably, about a third see it in a negative light, and another third have no opinion. Overwhelmingly, Turks reject Hamas (10% favorable, 70% unfavorable). And in Pakistan more than seven-in-ten offer no opinion. 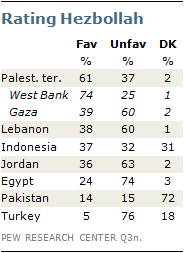 In its home country, about four-in-ten say (38%) they have a favorable view of Hezbollah, although there are sharp divisions among religious communities. An overwhelming majority of Lebanese Shia Muslims (87%) express a positive view of Hezbollah, compared with just 8% of Sunni Muslims and 24% of Christians. 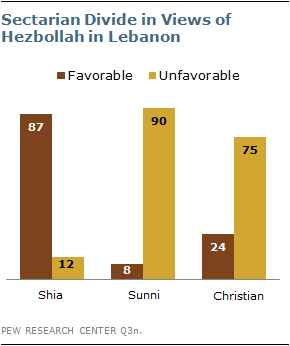 Lebanon’s religious divisions also shape attitudes toward Hezbollah leader Hassan Nasrallah: 95% of Shia Muslims have confidence in him to do the right thing in world affairs; only 15% of Sunnis and 24% of Christians share this view.

In Jordan, 36% express a favorable view of Hezbollah, down substantially from 54% in last year’s poll. Only 24% of Egyptians give the militant group a positive review, down from as high as 56% in 2007.

Elsewhere, Indonesians are slightly more positive (37%) than negative (32%) about Hezbollah. Very few Turks (5%) offer a favorable view of the organization. And the vast majority of Pakistanis decline to give an opinion.

Although Israel fought a 34-day war with Hezbollah in 2006, roughly half (48%) of Israeli Arabs have a positive opinion of the organization; 41% offer a negative view. 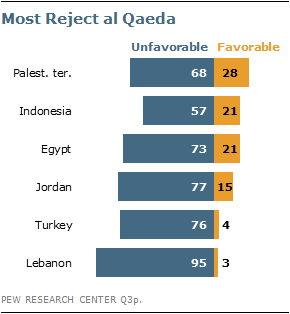 There is relatively little support for al Qaeda in Arab nations, Turkey and Indonesia. The terrorist group registers its highest level of support in the Palestinian territories, where 28% express a favorable opinion. Roughly one-in-five Indonesians (21%) and Egyptians (21%) have a positive view of al Qaeda.

Among Jordanians, 15% rate al Qaeda favorably, and, as is the case for Hamas and Hezbollah, al Qaeda’s image has declined in Jordan since last year, when 34% offered a positive opinion.

Before his death, al Qaeda’s leader, Osama bin Laden, was largely unpopular in majority Muslim nations. He received his highest ratings in the Palestinian territories (34% had confidence in him to do the right thing in world affairs), followed by Indonesia (24%), Pakistan (21%), Egypt (21%), Jordan (13%), Turkey (3%), and Lebanon (1%). In recent years, support for bin Laden had declined in all of these nations (For more on Muslim views about bin Laden, see “Osama bin Laden Largely Discredited Among Muslim Publics in Recent Years,” May 2, 2011.) 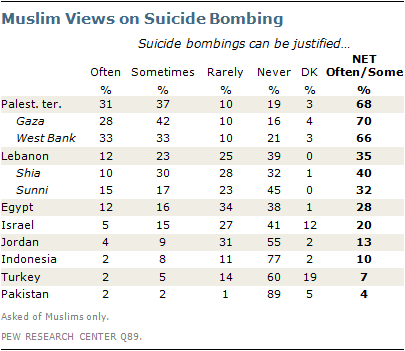 Only a minority of Muslims – and in some cases a very small minority – endorses suicide terrorism in these nations, with one clear exception: the Palestinian territories. Roughly seven-in-ten Palestinian Muslims (68%) say that suicide bombing and other forms of violence against civilian targets can often or sometimes be justified in order to protect Islam from its enemies. Large majorities hold this view in both Gaza (70%) and the West Bank (66%).

About a third of Lebanese Muslims (35%) say this type of violence is often or sometimes justified, and this view is especially prevalent among the country’s Shia community (40%). There is somewhat less support for suicide attacks in Egypt (28%) and significantly less in Jordan (13%). Among Israel’s minority Muslim population, one-in-five endorse this kind of attacks, up from 7% in 2009.

Outside of the Arab Middle East, there is less support for suicide bombing: just 10% of Indonesian, 7% of Turkish, and 4% of Pakistani Muslims say it can be justified.

Over the last decade, support for suicide terrorism has declined significantly across much of the Muslim world. For instance, in 2002, 74% of Lebanese Muslims said suicide bombing is often or sometimes justifiable, compared with 35% this year. In Pakistan – a nation plagued by terrorism over the last few years – 41% of Muslims said these attacks are often or sometimes justified in 2004; just 4% hold that view today.

However, the high level of support for suicide violence in the Palestinian territories has not changed over time. And in Egypt, support has actually been slowly on the rise since 2007 – then, only 8% of Muslims said suicide bombing can often or sometimes be justified to protect Islam from its enemies; today, 28% hold this view – the same percentage as in 2006.

Arab Spring Fails to Improve U.S. Image Chapter 1. Opinions of the U.S. and President Barack Obama Chapter 2. Protests in the Middle East Chapter 3. Views of Democracy and the Role of Islam
Chapter 4. Views of Extremist Groups and Suicide Bombing
Views of HamasViews of HezbollahViews of al QaedaSuicide Terrorism
Survey Methods