The popular uprisings in Egypt, Tunisia and other Middle Eastern countries captured the attention of publics both inside and outside the region. Impressive majorities in Arab countries report following news about the political demonstrations. Turks also paid close attention to the uprisings. Indonesians and Pakistanis, however, focused less on the dramatic political changes.

Most people say they were excited by the popular protests, although opinion varies as to whether the demonstrations will lead to more democracy in the Middle East. Neighboring Arab publics are optimistic on this count, while people in other Muslim countries are less certain. Most Israelis have also followed events in Egypt and elsewhere, but have mixed views on whether the political protests will encourage greater democracy in the region.

Public Reaction to the Protests 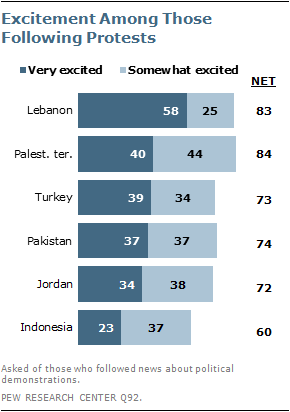 Majorities in Arab countries say they were riveted by the political demonstrations in their region. Overwhelming numbers of Jordanians (98%), Egyptians (96%), Palestinians (94%), and Lebanese (86%), for instance, report following news about the uprisings.

Outside the Arab world, 78% of Turks say they followed news about events in countries such as Egypt, Tunisia, Bahrain and Libya. However, in Muslim countries farther afield, fewer report tracking the region’s political upheaval. Only 41% of Indonesians say they followed news about the political protests that erupted in Egypt and elsewhere, while just 11% of Pakistanis report focusing on the unrest sweeping the Middle East (half of Pakistanis do not answer whether they followed events or not).

Among those who followed news about the political demonstrations, excitement was commonplace. Large majorities in Lebanon (83%) and the Palestinian territories (84%) report being excited, including 58% and 40%, respectively, who say they were very excited. In Jordan, more than seven-in-ten (72%) were generally excited by the protests, with about a third (34%) saying they were very excited.

In Muslim countries outside the Middle East, the political demonstrations in Egypt and elsewhere also elicited excitement. More than seven-in-ten Turks (73%) who tracked developments in the region say they were excited by the demonstrations, with nearly four-in-ten (39%) saying they were very excited. Among the relatively small number of Pakistanis who tuned into the dramatic news from the Middle East, the reaction was similar: 74% were excited by events, with half that number (37%) very excited. Among Indonesians following events in the Arab world, 60% say they were excited by the popular uprisings, but only 23% describe being very excited.

Impact of the Protests 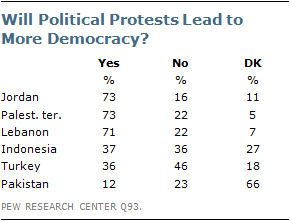 Arab publics are generally optimistic about the impact of the political demonstrations in Egypt and elsewhere. Clear majorities in Jordan (73%), the Palestinian territories (73%) and Lebanon (71%) believe the protests will lead to greater democracy in the Middle East.

Egyptians are also upbeat. Asked specifically about the future of their country, a majority of Egyptians (57%) say they are optimistic. And though only 41% say it is very likely that the next election will be free and fair, fully 71% say democracy is preferable to any other system of government. (For a more detailed analysis of Egyptians’ views about their country’s future, see “Egyptians Embrace Revolt Leaders, Religious Parties and Military, As Well,” released April 25, 2011.)

Beyond the Arab world, publics in Muslim countries are more circumspect about the long-term impact of the popular uprisings. Just over a third of Turks (36%) believe the protests will lead to greater democracy in the Middle East, compared with a plurality (46%) who are doubtful. Nearly one-in-five (18%) are unsure about the impact of the protests. 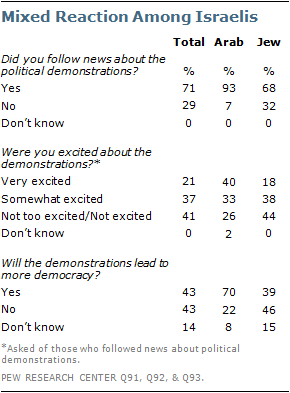 Like their Arab neighbors, many Israelis have paid attention to recent events in the Middle East. Overall, 71% say they have followed news about the political demonstrations in countries such as Egypt, Tunisia, Bahrain, and Libya. Among Israeli Arabs, over nine-in-ten (93%) say they followed the popular protests, while 68% of Israeli Jews report focusing on recent events in the region.

Among Israelis who followed the dramatic events in Egypt and elsewhere, 58% say they were excited by the political protests, but only 21% describe being very excited. Roughly twice as many Israeli Arabs (40%) as Jews (18%) report being very excited.

Overall, Israelis are evenly divided about the legacy of the popular uprisings: 43% think the political demonstrations will expand democracy in the region, while the same percentage disagrees. However, Israeli Arabs are much more optimistic, with fully 70% believing the protests will lead to more democracy. Just 39% of Israeli Jews share this view.

Next: Chapter 3. Views of Democracy and the Role of Islam
← Prev Page
Page1Page2You are reading page3Page4Page5Page6
Next Page →

Arab Spring Fails to Improve U.S. Image Chapter 1. Opinions of the U.S. and President Barack Obama
Chapter 2. Protests in the Middle East
Public Reaction to the ProtestsImpact of the ProtestsView From Israel
Chapter 3. Views of Democracy and the Role of Islam Chapter 4. Views of Extremist Groups and Suicide Bombing Survey Methods