As Turks prepare for national elections on June 12, they are increasingly upbeat about the direction of their country. And at a time when publics around the world generally remain gloomy about their economies, Turks are becoming more positive. This bodes well for Prime Minister Recep Tayyip Erdogan and his ruling Justice and Development Party (AKP), whom most observers believe will win a decisive victory in the elections. 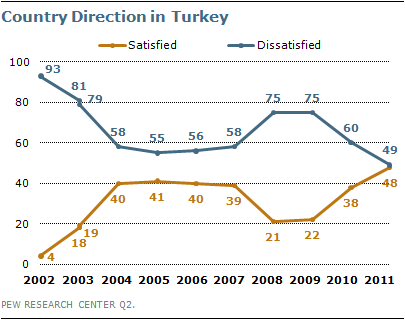 Under Erdogan’s leadership, Turkey has played a more assertive role in international affairs, and most Turks give the prime minister positive marks on foreign policy: 62% have confidence that he will do the right thing in world affairs. Moreover, Erdogan is also popular in neighboring Arab nations – most Egyptians, Jordanians, Lebanese, and Palestinians express confidence in the Turkish leader. In contrast, solid majorities in Israel, Germany, Spain, and France have little or no confidence in him.

These are among the key findings from a survey by the Pew Research Center’s Global Attitudes Project, conducted March 21 to April 26. The poll also finds that while Turks continue to favor joining the European Union, enthusiasm for EU ascension has waned in recent years. And there is no consensus about whether Turkey’s future lies more with Europe or the Middle East: 17% of Turks believe their country should look to Europe in the future; 25% say the Middle East; and 37% volunteer that both regions are equally important.

Turks are almost evenly divided about the current direction of their country: 49% are dissatisfied with the way things are going and 48% are satisfied. This is a notable improvement from last year, when 60% were dissatisfied and 38% were satisfied. And it is a dramatic change from 2009, when three-in-four Turks felt the country was on the wrong track. 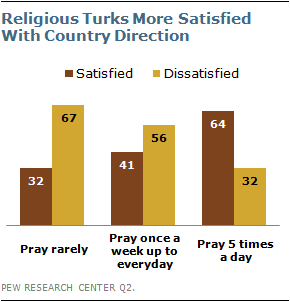 Opinions about the state of the country are strongly associated with religiosity. A solid majority (64%) of Muslim Turks who pray five times a day are satisfied with the direction of the nation. Among those who pray at least once a week but less than five times daily, only 41% are satisfied. And among those who hardly ever pray or only do so during religious holidays, just 32% express satisfaction.

Supporters of the AKP – who tend to express high levels of personal religiosity – are especially likely to believe the country is headed in the right direction: 73% say they are satisfied. Older Turks are also happier with the state of the country – 56% of those ages 50 and older are satisfied, compared with 46% of those ages 30-49 and 42% of people under 30. 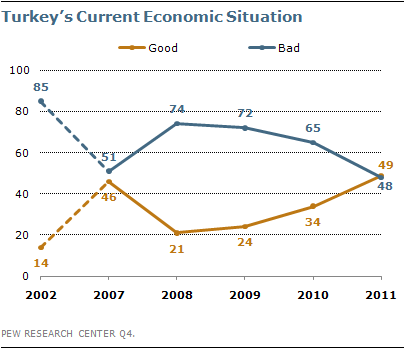 Views about the national economy have improved over the last year. Currently, 49% say the economy is in good shape, while 48% describe economic conditions as bad. In the spring 2010 Pew Global Attitudes survey, 65% rated the economy poorly and just 34% said it was in good shape.

Turkish assessments of the economy are much more positive today than when Erdogan won office nearly a decade ago. In a 2002 poll, conducted a few months before Erdogan’s AKP won its first national election, only 14% said economic conditions were good. By the next national election in 2007, this had risen to 46%.

As the global economy started to slump, Turkish views about their economic situation turned negative in 2008, and stayed negative through 2010, before recovering to some extent in the current poll.

Erdogan Receives High Marks in Turkey – and in Arab Nations 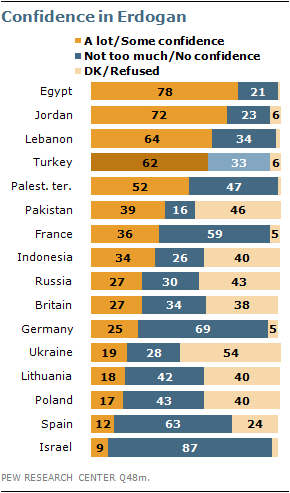 As he nears the end of his second term in office, Prime Minister Erdogan gets positive ratings for his handling of foreign affairs. About six-in-ten (62%) Turks have a lot or some confidence in Erdogan to do the right thing in world affairs, while one-third have little or no confidence in him.

The prime minister receives especially high marks from supporters of his own party (86% a lot or some confidence). And views about Erdogan are strongly linked to religiosity – 73% of Muslim Turks who pray five times daily voice confidence in him; 60% of those who pray at least once per week but less than five times a day are confident; and only 42% of those who hardly ever pray or do so just during religious holidays express a positive view about Erdogan’s leadership in world affairs.

Beyond Turkey’s borders, Erdogan is also popular in a number of neighboring Arab nations. Strong majorities of Egyptians (78% a lot or some confidence), Jordanians (72%), and Lebanese (64%) express confidence in the Turkish prime minister, who, along with his Foreign Minister Ahmet Davutoğlu, has in many ways raised Turkey’s profile on the world stage in recent years.

Erdogan, for example, has received considerable attention for breaking with previous Turkish policy and taking a more confrontational approach toward Israel regarding Israeli policies in the West Bank and Gaza. In the Palestinian territories themselves, Erdogan receives somewhat less support than in other Arab nations, with 52% expressing confidence in the Turkish leader and 47% saying they have little or no confidence in him. He is much more popular in the West Bank (61% a lot or some confidence) than in Gaza (35%).

Israelis overwhelmingly assign Erdogan negative ratings – only 9% express confidence in him, while 87% lack confidence. However, among Israel’s minority Arab community, Erdogan is generally popular, with 60% voicing confidence in him. Nearly all Israel Jews surveyed (95%) express little or no confidence.

The prime minister also fares poorly in Western Europe – clear majorities in Germany (69%), Spain (63%), and France (59%) give Erdogan a negative assessment. In the other European and predominantly Muslim nations where this question was asked, large numbers are unable to offer an opinion about the Turkish leader. 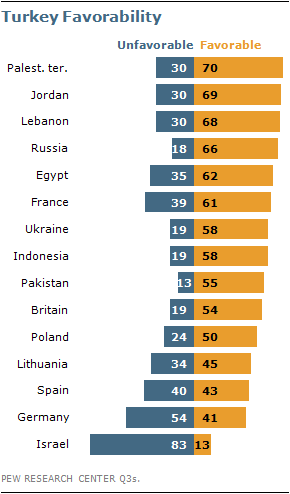 Turkey, as a nation, is generally popular in the countries surveyed. Majorities in all of the predominantly Muslim nations polled (the Palestinian territories, Jordan, Lebanon, Egypt, Indonesia, and Pakistan) express a favorable opinion of Turkey. But the country also receives a positive rating in much of Europe, including Russia (66% favorable), France (61%), Ukraine (58%), and Britain (54%).

Israel and Germany are the clear outliers on this question. Fully 83% of Israelis have an unfavorable opinion of Turkey, although once again there are significant differences between the country’s Jewish (5% favorable) and Arab (68% favorable) communities. In Germany, home to a large Turkish minority, just over half (54%) express an unfavorable view of Turkey. 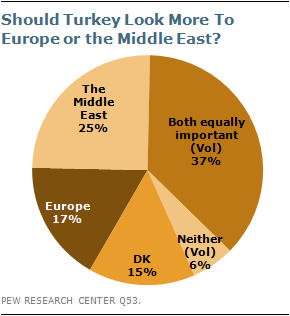 There is no consensus as to whether in the future Turkey should look to Europe (17%) or to the Middle East (25%). Nearly four-in-ten (37%) volunteer that both are equally important, while 6% say that neither are important and 15% do not offer an opinion.

By a narrow margin, Turks favor joining the European Union. Currently, 52% endorse EU membership, while 42% oppose it. While support for EU ascension has not changed substantially in Turkey since last year, it has dropped sixteen percentage points since 2005, when 68% favored joining the EU.

Younger Turks are more likely to favor joining Europe: 61% of those ages 18 to 29 hold this view, compared with 50% of 30 to 49 year-olds, and 43% of those age 50 and older. EU membership is also especially popular among the country’s Kurdish minority (76% favor). 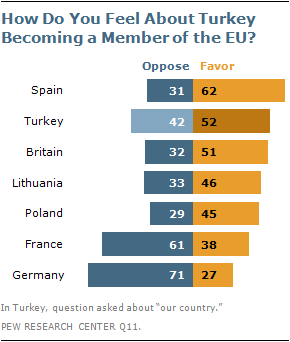 On balance, publics in most of the EU member nations surveyed support Turkish membership in the organization. Majorities in Spain (62%) and Britain (51%) favor membership, as do pluralities in Lithuania (46%) and Poland (45%). However, majorities hold the opposite view in two of the EU’s most powerful countries: Germany (71% oppose) and France (61%).

Among the EU countries surveyed, there has been little change since the Pew Global Attitudes Project last asked this question in 2005, although support for Turkish EU membership has slipped slightly in Spain (-6 percentage points), Britain (-6), and Poland (-6).