With massive protests threatening to upend the three-decades-long reign of President Hosni Mubarak, the world has been captivated by the events in Egypt. In a survey conducted April 12 to May 7, 2010, the Pew Research Center’s Global Attitudes Project examined the views of Egypt and six other Muslim publics about politics and the role Islam should play in it.

A 59%-majority of Muslims in Egypt believed that democracy was preferable to any other kind of government. About one-in-five (22%), however, said that in some circumstances, a non-democratic government could be preferable, and another 16% said it did not matter what kind of government is in place for a person in their situation.

Divisions about the perception of Islam’s role in politics were also seen in Lebanon and Pakistan.

In contrast, Muslims in Indonesia, Nigeria and Turkey overwhelmingly agreed that Islam played a large role in their politics.

By wide margins, Muslims surveyed in the spring of 2010 believed that Islam’s influence in politics was positive rather than negative. In Egypt, Islam’s role in politics was seen favorably by an overwhelming 85%-to-2% margin among Muslims. 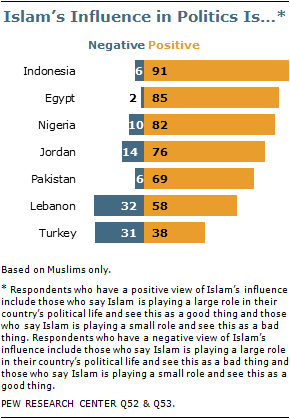 In Lebanon and Turkey, close to a third said that Islam had a negative influence in politics, but in both nations more believed Islam’s influence was positive than said it was negative. 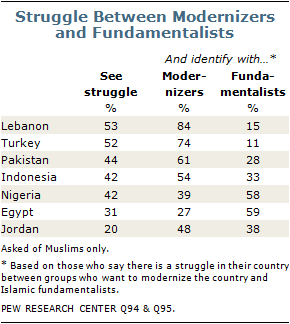 Asked whether there is a struggle in their nations between those who want to modernize their country and Islamic fundamentalists, a 61%-majority of Muslims in Egypt said they did not see a struggle. Just 31% of Egyptian Muslims saw a struggle between modernizers and fundamentialists in their country. Among the seven Muslim publics surveyed in 2010, only in Jordan (20%) did fewer say they saw such a struggle.

Among Egyptian Muslims who did see a struggle, a 59%-majority sided with the fundamentalists. Just 27% of those who saw such struggle sided with the modernizers. 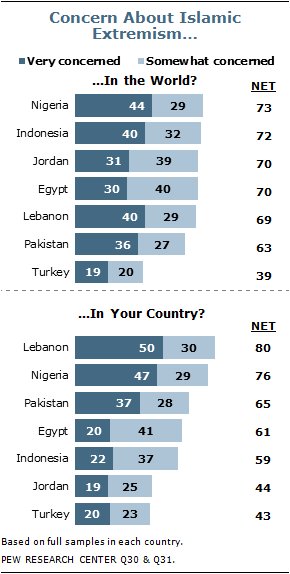 This stands in sharp contrast with four other Muslim publics surveyed. Many more Muslims in Lebanon, Turkey, Pakistan and Indonesia than in Egypt said they saw a struggle between modernizers and fundamentalists in their country.

By comparison, at least three-quarters in Lebanon (80%) and Nigeria (76%) were concerned about Islamic extremism in their nation, while less than half expressed such concern in Jordan (44%) and Turkey (43%).

Asked about extremism around the world, 30% of Egyptians were very concerned about Islamic extremism and 40% were somewhat concerned.

Large majorities in five of the other Muslim publics surveyed also expressed concern about Islamic extremism around the world. Only in Turkey did a majority not express concern.

For more, see “Muslim Publics Divided on Hamas and Hezbollah; Most Embrace a Role for Islam in Politics“

Muslim Publics Divided on Hamas and Hezbollah; Most Embrace a Role for Islam in Politics