Pakistanis see India as a greater threat to their country than the Taliban or al Qaeda. Fully 53% of respondents consider India “the greatest” threat to Pakistan. Yet, despite the high levels of threat perception, Pakistanis support better relations with their neighbor. More than seven-in-ten (72%) consider it important that their country’s relations with India improve. Further, Pakistanis are supportive of additional talks and increased economic ties between the two countries.

Many See India as Greatest Threat 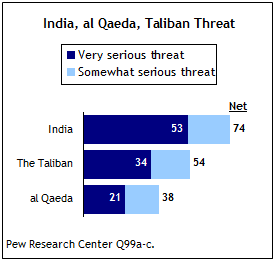 A strong majority of Pakistanis see India as a threat to their country (74%), including 53% who think their neighbor poses a “very serious” threat. Pakistanis perceive India as a bigger threat than the Taliban or al Qaeda. Just over half (54%) think that the Taliban is a very or somewhat serious threat and fewer than four-in-ten (38%) say the same about al Qaeda (see Chapter 1 for more detailed discussion of views toward the Taliban and al Qaeda). 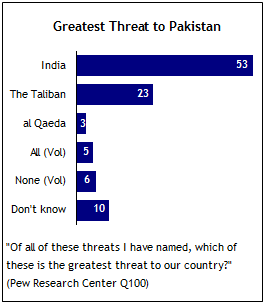 Respondents in Punjab are more likely than any other region polled (68%) to consider India the greatest threat. Threat perception is also high (71%) among supporters of the Pakistan Muslim League-Nawaz (PML-N), a party that has its strongest base in Punjab. 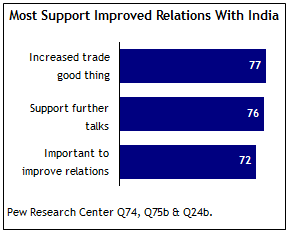 Not only do Pakistanis consider it important to improve relations with India, they also favor greater economic and political ties between the two countries. Roughly three-fourths (76%) of Pakistanis favor additional talks with India, and similar numbers advocate better economic ties (77%). 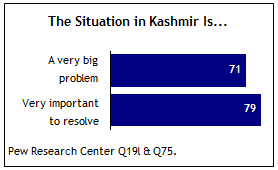 The longstanding conflict in Kashmir remains a major obstacle to the development of closer ties between India and Pakistan. Slightly more than seven-in-ten (71%) Pakistanis consider the situation in Kashmir a very big problem for their country.

Majorities of Pakistanis across ethnic, regional and partisan groups see Kashmir as a very big or a moderately big problem. However, concern about this issue is highest among residents of the Punjab province (95%) who share a common border with India and Kashmir, and among the Muhajirs (91%), who immigrated to Pakistan from across the border after the 1947 partition of India and Pakistan.

Not only do most Pakistanis think the Kashmir situation is a very big problem in their country, nearly eight-in-ten (79%) think it is very important that the dispute be resolved. In line with their high levels of concern about the issue, 86% among residents of Punjab and the same percentage of Muhajirs consider this a very important issue for resolution.