Results for the survey are based on face-to-face interviews conducted April 13 to April 28, 2010. The survey in Pakistan is part of the larger 2010 Pew Global Attitudes survey conducted in 22 nations from April 7 to May 8, 2010, under the direction of Princeton Survey Research Associates International. (For more results from the 22-nation 2010 poll, see “Obama More Popular Abroad Than At Home, Global Image Of U.S. Continues To Benefit” released June 17, 2010.)

The table below provides details about the survey’s methodology, including the margin of sampling error based on all interviews conducted in Pakistan. For the results based on the full sample, one can say with 95% confidence that the error attributable to sampling and other random effects is plus or minus the margin of error. In addition to sampling error, one should bear in mind that question wording and practical difficulties in conducting surveys can introduce error or bias into the findings of opinion polls. 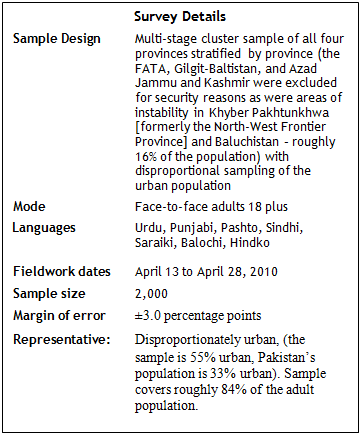 The sample covers roughly 84% of the adult population. All four provinces of Pakistan were sampled excluding areas of instability in Khyber Pakhtunkhwa (formerly the North-West Frontier Province) and Baluchistan. Instability also made it impossible to survey the Federally Administered Tribal Areas (FATA), Gilgit-Baltistan (formerly the Federally Administered Northern Areas, or FANA), and Azad Jammu and Kashmir (AJK). The sample is disproportionately urban due to the greater heterogeneity of the urban population. The sample is 55% urban while Pakistan’s population is roughly 33% urban. Data are weighted to reflect the actual urban/rural split in Pakistan.