Many Muslims in Pakistan say there is a struggle between groups that want to modernize their country and Islamic fundamentalists, and most of those who see a struggle say they identify with the modernizers. Still, Pakistani Muslims welcome the influence of Islam in their country’s politics, and solid majorities say they would favor making gender segregation in the workplace the law in Pakistan as well as strict punishments such as whippings and cutting off of hands for crimes like theft and robbery, stoning people who commit adultery and the death penalty for those who leave the Muslim religion.

Muslim men are much more likely than women to say there is a struggle between those who want to modernize Pakistan and Islamic fundamentalists; 54% of men see a struggle, compared with 34% of women. A year ago, Muslim women were about as likely as men to say there was a struggle in their country (38% and 42%, respectively). 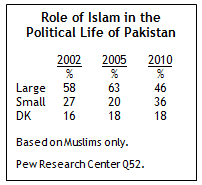 Pakistani Muslims are less likely than they were in past surveys to see substantial Islamic influence in the political life of their country. Fewer than half (46%) now say Islam plays a very large or fairly large role, while 36% say the role of Islam in Pakistani politics is small. In 2005, a solid majority (63%) said Islam played a large role and just 20% said it played a very small or fairly small role in politics. 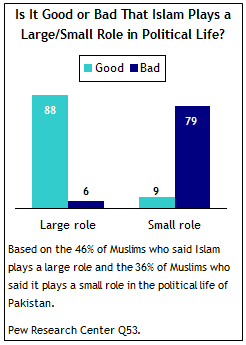 Muhajirs and Punjabis are more likely than other ethnic groups to say that Islam exerts considerable influence in Pakistani politics; 53% and 48% of Muslims within these groups, respectively, see Islam playing a large role. By comparison, 39% of Pashtun and 38% of Sindhi Muslims say that is the case.

Pakistanis overwhelmingly support making segregation of men and women in the workplace the law in their country (85%), and comparable percentages favor instituting harsh punishments such as stoning people who commit adultery (82%), whippings and cutting off of hands for crimes like theft and robbery (82%), and the death penalty for those who leave the Muslim religion (76%). Support for gender segregation and for severe punishments is pervasive across all demographic and regional groups. 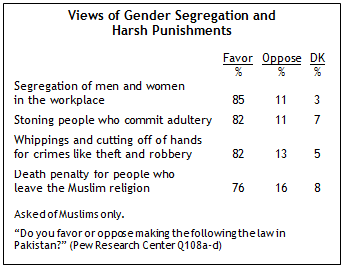 Both groups express similar views on gender segregation, however; 88% of Muslims who side with fundamentalists and 85% of those who identify with groups who want to modernize Pakistan say they favor the segregation of men and women in the workplace.