The Taliban and al Qaeda remain generally unpopular in Pakistan, and Pakistanis continue to overwhelmingly reject the suicide terrorism associated with both groups. Many Pakistanis say the Taliban poses a serious threat to their country and about half of those surveyed are worried that extremists could take control of Pakistan. However, concerns about an extremist takeover are less widespread than one year ago, and fewer now see the Taliban and al Qaeda as serious threats than was the case in last year’s poll, which was conducted soon after the Taliban’s spring 2009 encroachment into the Buner district, only 60 miles from the Pakistani capital Islamabad.

There continues to be support for using the Pakistani army to fight extremists in the Federally Administered Tribal Areas (FATA) and Khyber Pakhtunkhwa regions of the country, and about half of Pakistanis support the idea of the U.S. providing intelligence and logistical support to Pakistani troops. However, enthusiasm for American involvement in the battle against extremists has declined over the last year, and there is little support for U.S. drone strikes against leaders of militant groups. Moreover, the great majority of Pakistanis would like to see U.S. and NATO forces out of neighboring Afghanistan. 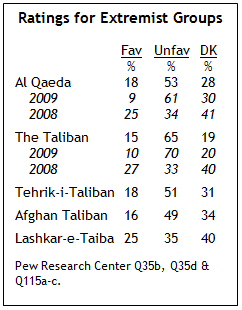 Views of the Taliban follow a similar pattern – 65% of Pakistanis currently give it a negative rating, down slightly from 2009 (70%), but up considerably from 2008, when only one-in-three Pakistanis offered a negative opinion. Just 15% now offer a favorable rating of the Taliban, although that number has risen from 10% a year ago. 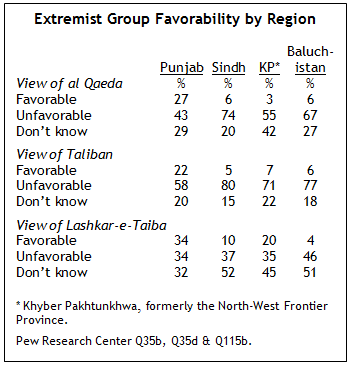 When asked about specific Taliban-affiliated groups operating in Pakistan and Afghanistan, on balance Pakistanis offer negative ratings, although many are unfamiliar with these groups. About half (51%) have an unfavorable opinion of the Tehrik-i-Taliban (an umbrella organization of Taliban affiliated groups in Pakistan, also known as the TTP), while 18% hold a positive view and 31% are unable to rate the organization. Similarly, 49% express a negative view of the Afghan Taliban, 16% a positive view, and 34% offer no opinion.

Opinions about Lashkar-e-Taiba (a Pakistani extremist organization that is active in Kashmir and has often attacked Indian targets) are more mixed. Just over a third (35%) express a negative view of the militant group, while 25% have a favorable opinion and four-in-ten offer no assessment.

Consistently, militant groups receive more positive ratings in Punjab than in other regions. While 27% in Punjab offer a favorable opinion of al Qaeda and 22% express a favorable view of the Taliban, support for these groups is only in the single digits in Sindh, Khyber Pakhtunkhwa, and Baluchistan. Lashkar-e-Taiba also gets its most positive ratings in Punjab, where equal numbers express a positive (34%) and negative (34%) view of the organization. 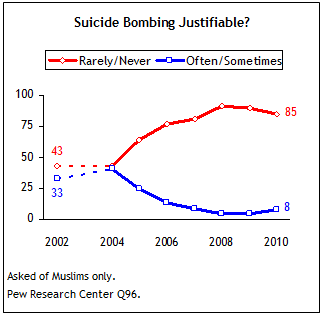 Militant organizations also receive somewhat more positive assessments from lower-income respondents.2 For instance, 26% of those with low household incomes have a favorable view of the Taliban, compared with 13% of middle income respondents and 10% of those with higher incomes. Views of al Qaeda, Lashkar-e-Taiba, TTP, and the Afghan Taliban are also generally more positive among the lower-income group. 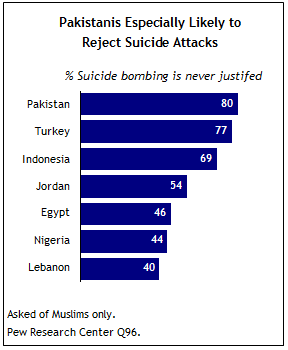 Support for suicide attacks has declined steeply in Pakistan in recent years and it remains low on this year’s poll. As recently as 2004, roughly four-in-ten (41%) Pakistani Muslims said suicide bombing and other forms of violence against civilian targets are often or sometimes justified to defend Islam. However, support for these kinds of attacks plunged to 9% by 2007 and has stayed in the single digits since then. Currently, 8% of Pakistani Muslims consider suicide bombing justifiable

Rejection of suicide terrorism is more common among Pakistanis than among most of the other Muslim publics included in the spring 2010 Pew Global Attitudes survey. Eight-in-ten Pakistani Muslims say these attacks are never justified. Large majorities of Muslims in Turkey (77%) and Indonesia (69%) also hold this view, as well a slim majority in Jordan (54%). However, less than half of Egyptian (46%), Nigerian (44%) and Lebanese (40%) Muslims believe this kind of violence is never justified.

Views toward Osama bin Laden, whom some experts believe is now hiding in Pakistan’s tribal areas, have followed a somewhat similar trajectory, with steep declines since the middle of the last decade. In 2005, about half (52%) of Pakistani Muslims expressed confidence in bin Laden to do the right thing in world affairs; today only 18% share this view. 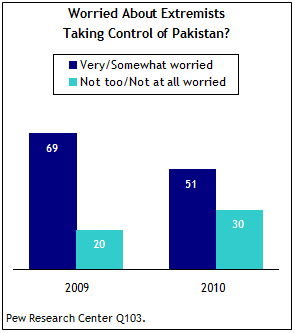 Most Pakistanis remain worried about the rise of Islamic extremism in their country, although these concerns have waned somewhat since last year. Nearly two-thirds (65%) say they are very or somewhat concerned about extremism in Pakistan, compared with 79% in 2009. When asked about the rise of extremism around the world, Pakistanis are also less concerned than they were last year (63% now vs. 76% in 2009).

Fears that extremists may take control of Pakistan are also less widespread in this year’s survey. A year ago, 69% were very or somewhat worried that extremist groups could take over the country; roughly half (51%) currently feel this way. Concerns about an extremist takeover are most common among high-income (63%) and well-educated (60%) respondents, as well as those from the Sindh region (61%).3 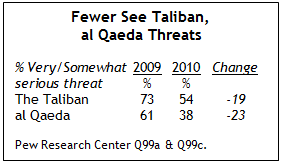 Similarly, Pakistanis see the Taliban and al Qaeda as less threatening than in last year’s survey. Currently, 54% consider the Taliban a very or somewhat serious threat to Pakistan, down from 73% in 2009. Just 38% say al Qaeda is a serious threat, compared with 61% last year. 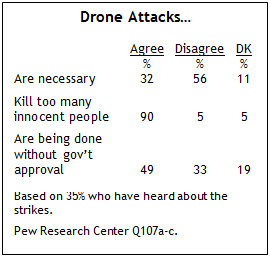 Despite their opposition to extremist groups, Pakistanis who have heard about drone attacks targeting leaders of extremist organizations tend to oppose these attacks. Just over one-in-three Pakistanis (35%) have heard about the drone strikes. Nearly all (93%) of those who are familiar with the strikes say they are a bad thing.

Most Pakistanis (56%) who have heard about the drone attacks say they are not necessary to defend Pakistan from extremist groups, while about one-in-three (32%) believe they are necessary. Nine-in-ten think these attacks kill too many innocent people.

Roughly half (49%) of Pakistanis who have heard about the strikes think they are being conducted without their government’s approval, while 33% disagree with this opinion. About two-thirds (66%) of those familiar with the drone attacks believe the U.S. government is conducting them, while 6% say it is the Pakistani government, and 15% volunteer that it is both governments.

Even though the drone attacks are unpopular, many Pakistanis believe the death of TTP leader Baitullah Mehsud, who was killed by a drone missile attack in August 2009, was a good thing. Among those who have heard about Mehsud’s death, 47% say it was a good thing, 31% say it was bad, and 22% do not give an opinion.4 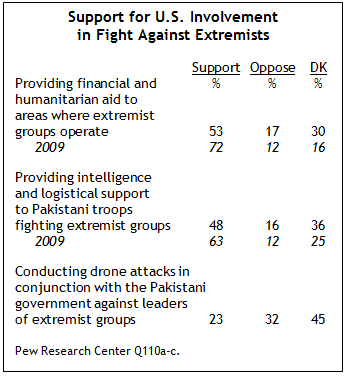 Support for U.S. involvement in the battle against extremist groups in Pakistan has declined since last year. Currently, 53% of Pakistanis support the U.S. providing financial and humanitarian aid to areas where extremist groups operate, down from 72% in 2009.

Just 23% of Pakistanis support the idea of the U.S. conducting drone strikes in conjunction with the Pakistani government against extremist leaders. About one-in-three (32%) oppose this idea, while nearly half (45%) do not have an opinion. 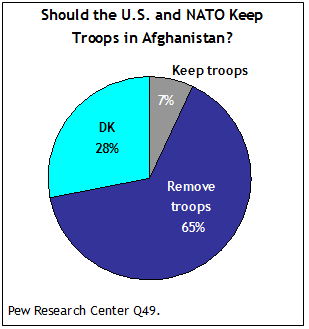 U.S. and NATO military efforts in neighboring Afghanistan are broadly unpopular among Pakistanis – 65% say the U.S. and NATO should withdraw their troops as soon as possible, down slightly from 72% in 2009. Only 7% say coalition forces should remain in Afghanistan until the situation there is stabilized, while 28% do not offer an opinion.

Many Pakistanis do not see the war in Afghanistan having an impact on their country. One-in-four say that it would be bad for Pakistan if the Taliban regained control of Afghanistan, 18% say it would be a good thing, and 27% believe it would not matter. Three-in-ten have no view on this issue.

The Pakistani Role in Fighting Extremists 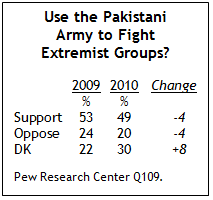 About half (49%) of Pakistanis support the idea of using their country’s army to fight extremist groups in FATA and Khyber Pakhtunkhwa, while 20% oppose this and 30% offer no opinion. There has been minimal change on this question since last year, although the percentage of Pakistanis who express no opinion has risen eight points.

In Khyber Pakhtunkhwa itself, public opinion leans in favor of using the army to fight extremists, although many residents of the region do not give an opinion – 43% support, 17% oppose, and 40% do not know. Support for using the military is stronger among high-income (60%) and middle-income (58%) Pakistanis than among those with lower household incomes (48%).

Few Pakistanis are familiar with the arrest of Mullah Abdul Ghani Baradar, a leading figure in the Afghan Taliban, by Pakistani authorities in February – only 12% are aware of his arrest. Half of those who have heard about this say it was a good thing, 33% consider it a bad thing, and 18% voice no opinion.

Next: Chapter 2. Attitudes Toward the U.S. and President Barack Obama
← Prev Page
Page1You are reading page2Page3Page4Page5Page6Page7Page8
Next Page →