Taken together, these responses provide a more descriptive view of the way Canadians and Mexicans see the U.S. and their relationship with their neighbor. The same Pew Research Center survey found that majorities in both countries lack confidence in Trump to do the right thing on world affairs and disapprove of some of his key foreign policies.

This analysis focuses on open-ended responses from Canadians and Mexicans when asked what one word comes to mind first when they think about the United States today. This analysis relates these open-ended responses to broader attitudes toward the U.S., including favorability toward the country and confidence in President Donald Trump to do the right thing regarding world affairs.

Here are the questions used for this report, along with responses, its coding methodology and its survey methodology.

In terms of percentages, the words “Trump” and “president” account for 18% of the responses Canadians give to this question. Only 6% of those polled in Mexico mention “Trump” or “president,” despite the fact that Mexicans have expressed the least confidence in Trump of any country surveyed by the Center since 2017. “Trump,” “president” and “good” are the only words with 10 or more mentions by both Canadian and Mexican respondents. 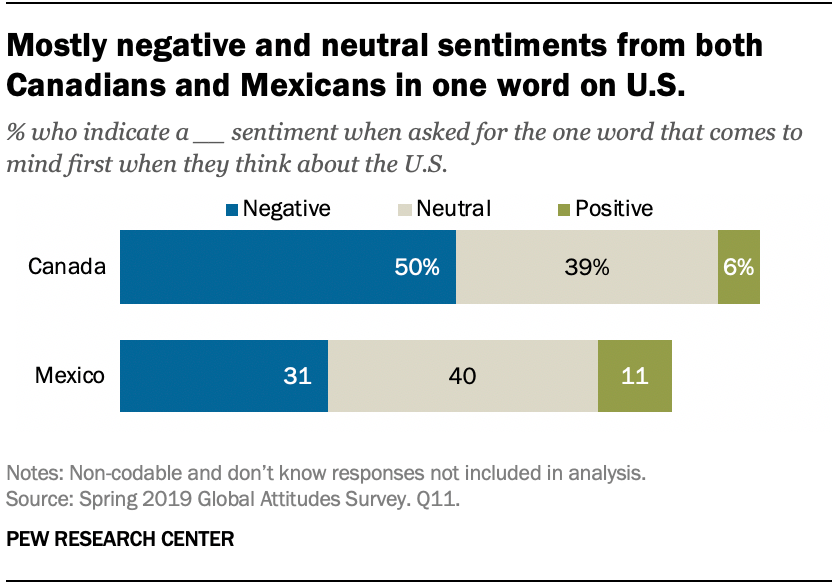 Overall, both Canadians and Mexicans use mostly negative or neutral words to describe the U.S., and only a small portion mention a positive word.

The Center coded words as negative or positive only when it was clear that responses leaned one way or the other. Words tied to general themes – like “economy” and “migration” – were coded as neutral in most cases. However, when survey respondents used a generally neutral term as part of a broader statement that was clearly positive or negative, it was coded as such. For example, mentions of simply “Trump” were coded as neutral, whereas a response of “Trump is an idiot” was coded as negative and “Trump is doing a fair job” was coded as positive. “Trump” and “president” made up 40% of all neutral words in Canada, but only 11% of all neutral words in Mexico.

Canadians are more likely than Mexicans to use a negative word to describe the U.S. (50% vs. 31%). Except for “powerful,” “power,” “good” and “confused,” the other words mentioned at least 10 times by Canadians have a negative connotation, such as “disappointing,” “sad” and “disorganized.”

This is not the case among Mexicans, who more frequently offered neutral rather than negative words. Neutral words related to money, work and migration collectively accounted for 26% of the responses provided by Mexicans, while negative words like “bad,” “discrimination,” “racism,” “racists” and “injustice” were also among the most frequently mentioned. 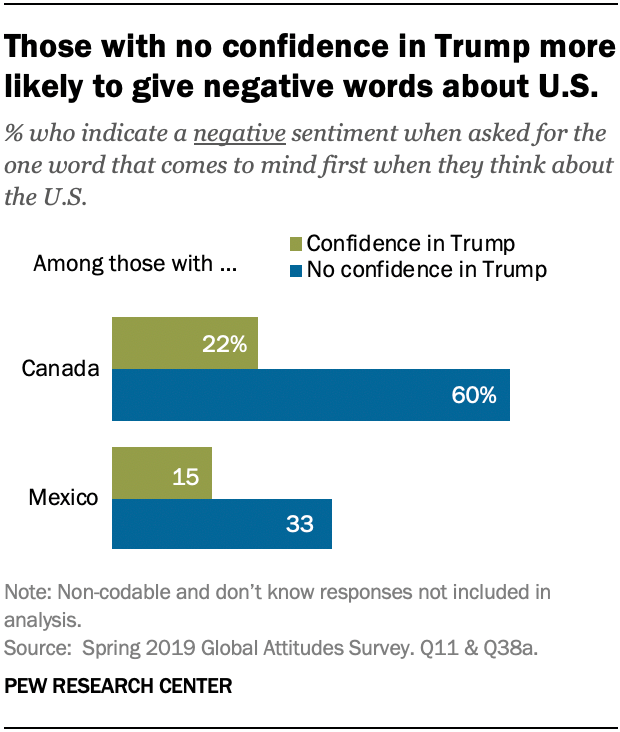 In both Mexico and Canada, men are about twice as likely as women to say something positive about the U.S., though the percentages who give positive responses are quite small in both groups (11% of men vs. 5% of women in Canada and 17% of men vs. 8% of women in Mexico). In Mexico, older people are more likely than young people to offer a negative word. This pattern is similar to the one observed in views of the U.S. among Mexicans generally: Older adults in Mexico rate the U.S. more unfavorably than younger adults. 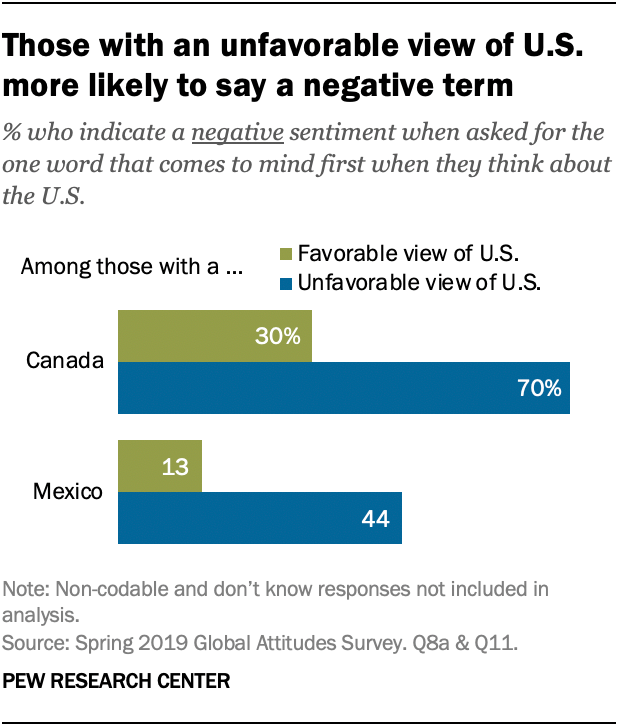 Note: Here are the questions used for this report, along with responses, its coding methodology and its survey methodology.