Donald Trump has long pushed for a tougher approach on illegal immigration, both on the U.S.-Mexico border and elsewhere in the country. As a candidate for president, Trump pledged to build a border wall to reduce illegal crossings. And shortly after being elected, Trump said his administration would deport as many as 3 million unauthorized immigrants with criminal records living in the United States.

So how has immigration enforcement changed under Trump? Here’s a look at the data on three key measures – border apprehensions, interior arrests and deportations – based on the latest available full-year statistics from Customs and Border Protection (CBP), Immigration and Customs Enforcement (ICE) and the Department of Homeland Security (DHS). The analysis also includes data about how various immigration policies and agencies are perceived by the U.S. public, based on Pew Research Center surveys.

With President Donald Trump’s immigration policy changes in the news, we wanted to examine how immigration enforcement has changed so far during his presidency, focusing on the two primary agencies tasked with apprehending unauthorized immigrants: Customs and Border Protection (CBP) and Immigration and Customs Enforcement (ICE). This analysis is based on the most recent available full-year enforcement data from the two agencies, as well as data from the Department of Homeland Security, which encompasses both.

In addition to immigration enforcement statistics from the government, the analysis includes public opinion data from Pew Research Center surveys conducted online and on the phone in 2019. Links to these surveys – which include field dates, sample sizes and questions asked – are in the text of the analysis. Online and phone surveys conducted by the Center are weighted to be representative of the U.S. adult population by factors including gender, race, ethnicity and education.

Apprehensions at the U.S.-Mexico border 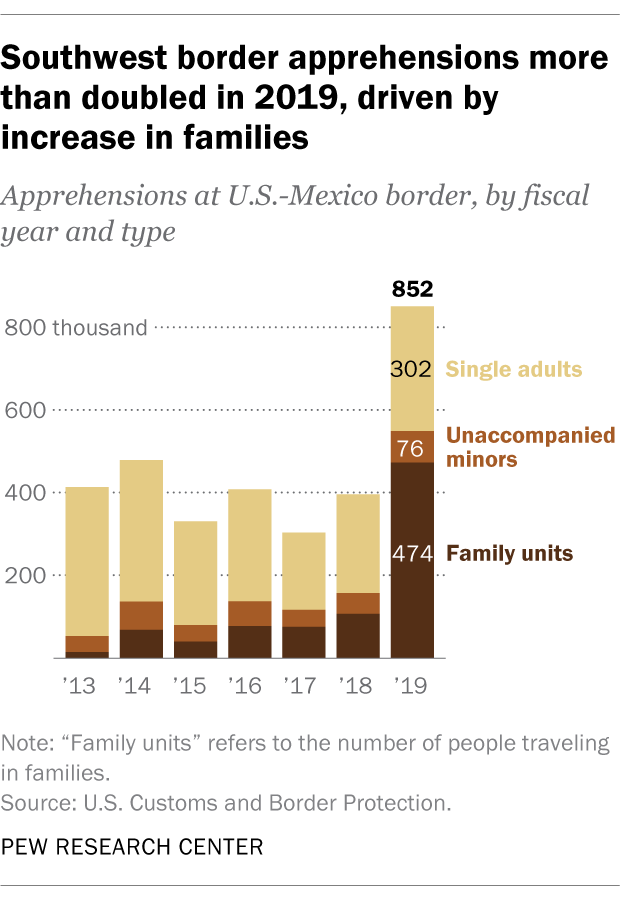 The number of migrant apprehensions at the U.S.-Mexico border rose in fiscal 2019 to its highest annual level in 12 years. The 851,508 apprehensions recorded last fiscal year (October 2018-September 2019) were more than double the number the year before (396,579) but still well short of the levels in the early 2000s, according to CBP, the agency tasked with enforcing immigration laws at the border.

The sharp rise in Central American families seeking asylum led to what CBP called a “humanitarian and national security border crisis.” In response, the Trump administration has made far-reaching changes to asylum procedures to discourage migrants from entering the U.S. along the southwest border. One prominent change is a policy known informally as “Remain in Mexico,” under which many asylum seekers at the southwest border wait in Mexico while their claims are adjudicated. In the past, many migrants apprehended at the border waited in the U.S. – for years, on average – until their cases were resolved. (Last week, a federal appeals court in California halted the Remain in Mexico program, and recent news reports have suggested that use of the program had declined anyway.)

Arrests of unauthorized immigrants in the country’s interior 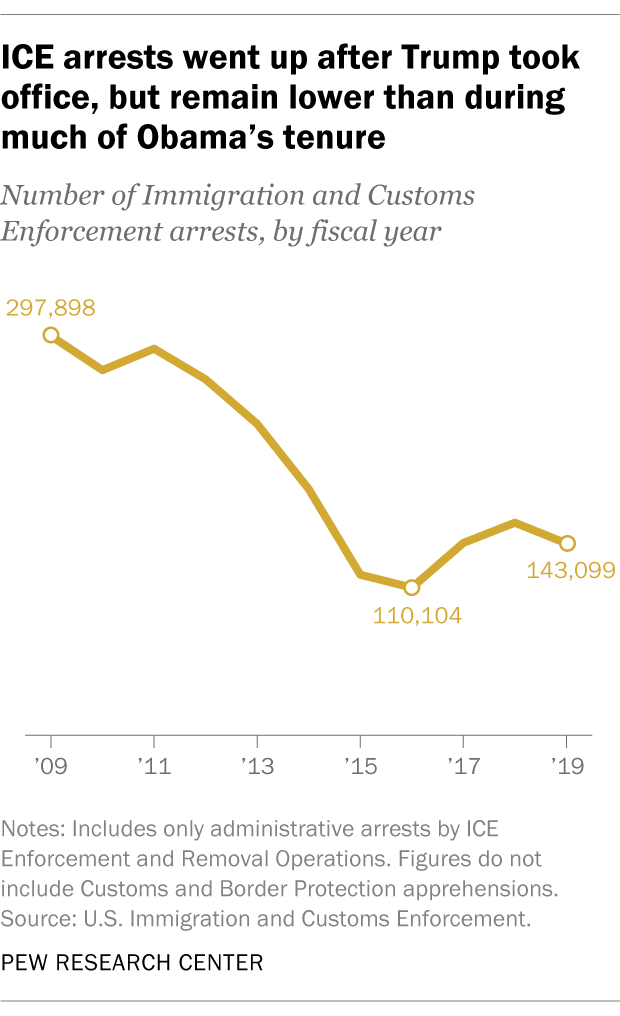 While CBP enforces immigration laws at the border, ICE is tasked with apprehending unauthorized immigrants in the interior of the country. The number of interior arrests made by ICE (known as “administrative arrests”) rose 30% in fiscal 2017 after Trump signed an executive order giving the agency broader authority to detain unauthorized immigrants, including those without criminal records. They went up again in fiscal 2018 but decreased in fiscal 2019 and remain far lower than during President Barack Obama’s first term in office.

In an annual report detailing its operations, ICE pointed to several factors to explain the decrease in interior arrests in fiscal 2019. Growing enforcement needs at the border “have compromised ICE’s ability to conduct enforcement in the interior,” the agency said, noting that it reassigned about 350 officers to assist along the border. It also pointed to “the lack of cooperation from an increasing number of jurisdictions nationwide,” a reference to “sanctuary cities” that have policies in place to limit cooperation with federal immigration enforcement authorities.

Under the Trump administration, ICE has been criticized by Democrats, some of whom have called for the agency to be abolished. In a September 2019 survey, just 19% of Democrats and Democratic-leaning independents expressed a favorable view of the agency, compared with 70% among Republicans and GOP leaners. ICE was the only federal department or agency – out of 16 asked about in the survey – viewed more negatively than positively by the public (54% unfavorable view vs. 42% favorable). 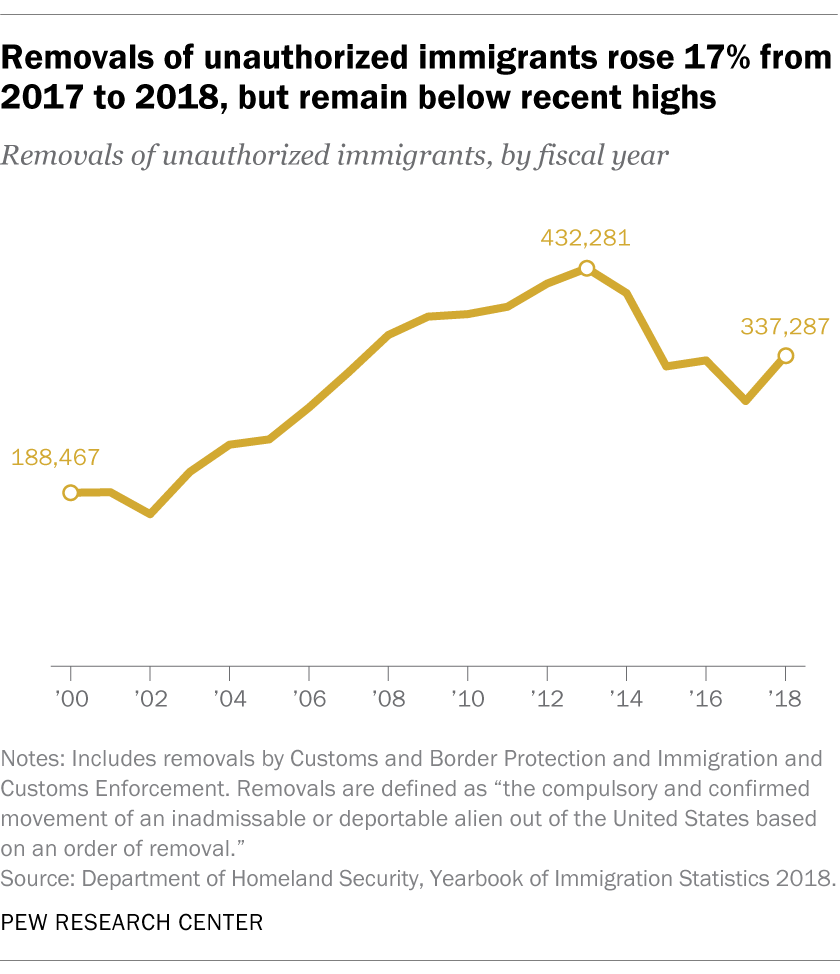 Unauthorized immigrants who are apprehended at the border or in the country’s interior can face deportation, known formally as “removal.” Both CBP and ICE carry out removals.

In fiscal 2018 – the most recent year for which complete data is available – CBP and ICE together carried out 337,287 removals of unauthorized immigrants, a 17% increase from the previous year, according to the Department of Homeland Security. But removals remained below the levels recorded during much of the Obama administration, including a three-year period between fiscal 2012 and 2014 when there were more than 400,000 per year.

ICE, which handles the majority of deportations, said in its most recent year-end report that its removal operations have encountered several challenges, including a growing backlog of cases in the immigration courts and “judicial and legislative constraints” that make it difficult to deport minors and family members.

A little over half of Americans (54%) said in a September 2019 Pew Research Center survey that increasing deportations of those in the country illegally is a very or somewhat important immigration policy goal. But these views were sharply divided by party: Around eight-in-ten Republicans and Republican-leaning independents (83%) said increasing deportations is very or somewhat important, compared with only around three-in-ten Democrats and Democratic leaners (31%). And increasing deportations ranked lower on the public’s priority list than some other steps, such as increasing security along the U.S.-Mexico border and establishing a way for immigrants living in the U.S. illegally to stay in the country legally.