Despite historically low levels of public trust in the federal government, Americans across the political spectrum continue to overwhelmingly express favorable opinions of a number of individual federal agencies, including the Postal Service, the National Park Service, NASA and the Centers for Disease Control and Prevention (CDC). And majorities of both Republicans and Democrats now express favorable views of the FBI, reflecting a rebound in GOP perceptions after a decline in recent years.

Of the 16 agencies asked about in a national survey by Pew Research Center, conducted Sept. 5-16 among 2,004 U.S. adults, 14 are viewed more favorably than unfavorably by the public.

Immigration and Customs Enforcement (ICE) is the sole agency asked about in the survey viewed more negatively (54% unfavorable) than positively (42% favorable), while the public is divided in its view of the Department of Education (48% favorable, 48% unfavorable).

Attitudes toward ICE continue to largely break along partisan lines: While 70% of Republicans and Republican-leaning independents have a favorable view of the agency, just 19% of Democrats and Democratic leaners say the same.

Wide majorities of Democrats and Republicans report having a favorable opinion of the Postal Service, the National Park Service, NASA, the CDC and the Census Bureau.

In contrast, Republicans are now more likely than Democrats to offer a favorable opinion of the Department of Justice (DOJ), reflecting substantial shifts in opinion in both parties.

About half of Democrats now express a favorable view (49%) of the DOJ, an 11 percentage point decline since last year and down from the nearly three-quarters of Democrats who viewed the department positively in January 2017. 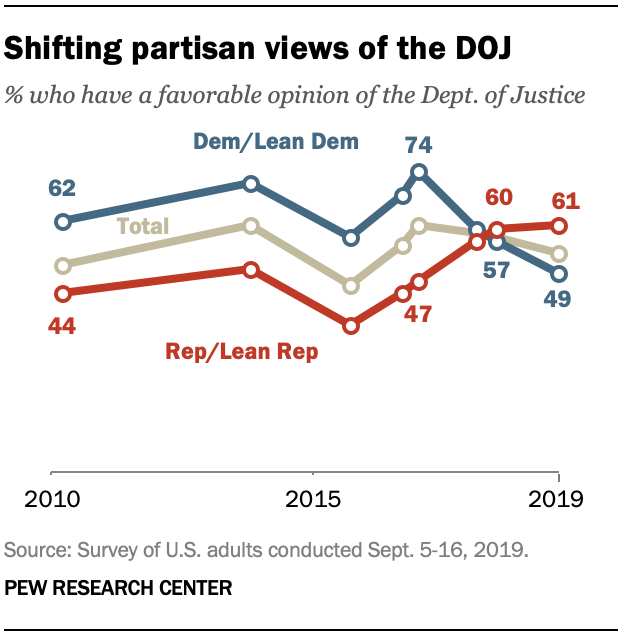 Republicans’ views of the Justice Department have become more positive over this time period: 61% of Republicans now say they view the DOJ favorably, up from 47% in January 2017.

Republican views of the FBI have rebounded after declining in 2018: About two-thirds of Republicans (66%) now say they have a favorable opinion of the FBI – up 17 percentage points since last July, but on par with views of the bureau in 2016 and early 2017. 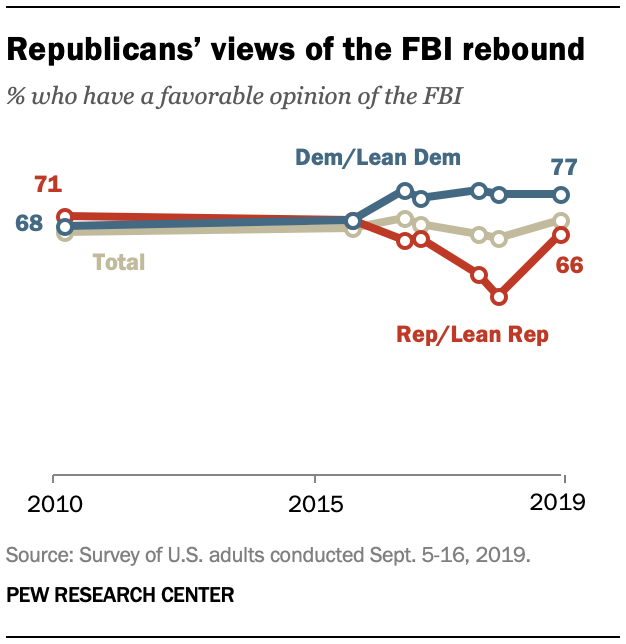 Democratic opinions of the FBI are little changed in recent years, with roughly three-quarters (77%) continuing to say they view the bureau favorably.

Today, roughly half of both Democrats (47%) and Republicans (48%) express a favorable view of the Department of Education. This marks a shift from surveys conducted throughout the Obama administration, when Democrats were consistently more likely than Republicans to view the department favorably.

A similar pattern is evident in opinions of the Environmental Protection Agency (EPA). In surveys conducted between 2010 and January 2017, there was a wide partisan gap in views of the agency: By margins of 20 percentage points or more, Democrats had more favorable views of the EPA than Republicans. That partisan gap is substantially narrower today.

Americans divided over preference for bigger or smaller government 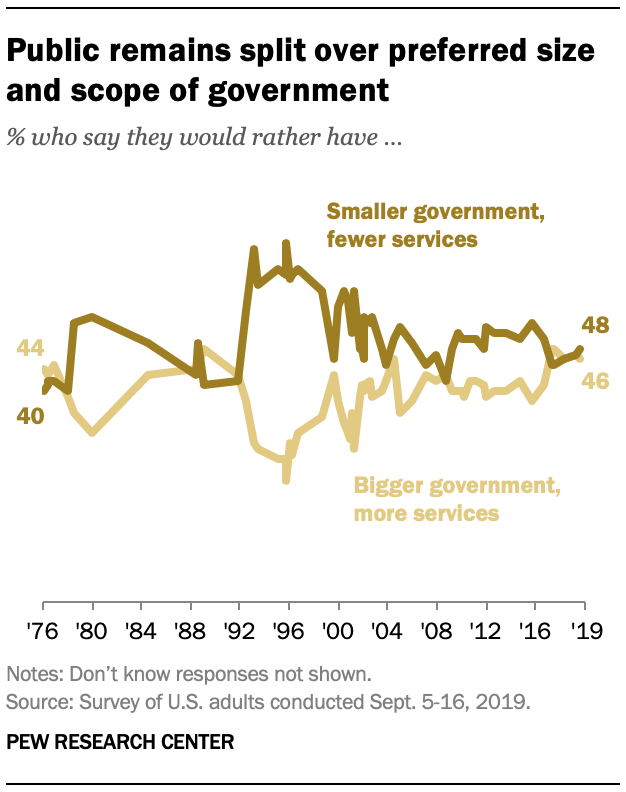 This balance of opinion is little changed since 2017.

Views about the size of government vary by demographics and partisanship.

While a 56% majority of men say they would prefer a smaller government, just 40% of women say the same.