In an era when the #MeToo movement is having an effect on corporate culture, Americans are looking to business leaders to ensure that workplaces are safe and respectful. And many think female leaders are better equipped to do this than men. 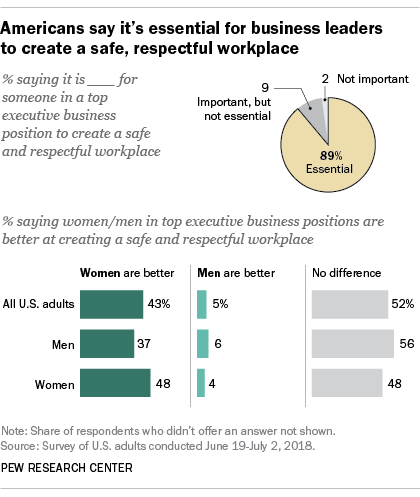 Overall, 89% of adults say it is essential for today’s business leaders to create a safe and respectful workplace, according to a new Pew Research Center survey. This ranks at the top of a list of qualities and behaviors the public views as essential for corporate leadership, along with being honest and ethical and providing fair pay and good benefits.

When asked whether men or women in top executive positions are better at creating safe and respectful workplaces, 43% say female executives are better while only 5% say men are better. About half (52%) say male and female leaders are equally capable.

Women are more likely than men to say female business leaders have an advantage over male leaders when it comes to creating safe workplaces (48% vs. 37%). A majority of men (56%) and 48% of women say there isn’t any difference. Very few women (4%) or men (6%) say male leaders do a better job creating such work environments.

Perceptions on this issue differ significantly by educational attainment – a gap driven almost entirely by well-educated women. Roughly two-thirds (64%) of women with a bachelor’s degree or more education say female business leaders do a better job creating safe and respectful workplaces. This compares with 47% of men with at least a bachelor’s degree, 41% of women without a college degree and 33% of men without a college degree.

There are also differences by party. Democrats and independents who lean to the Democratic Party are much more likely than Republicans and Republican leaners to say women do a better job in this area (53% vs. 31%). For their part, most Republicans (62%) say there is no difference between male and female leaders on this dimension (compared with 42% of Democrats).

It’s worth noting that women are vastly underrepresented in top business positions, both at the CEO level and immediately below it. Currently, 4.8% of CEOs of Fortune 500 companies are women.

Many Americans see a link between sexual harassment in the workplace and the lack of women in top leadership positions in business. Roughly four-in-ten adults (42%) say a major reason why there aren’t more women in top positions is that sexual harassment creates an environment that makes it harder for women to succeed in business. Half of women say this is a major factor, compared with a third of men.

Among those who see sexual harassment as a major impediment for aspiring female leaders, 61% say women in business do a better job than men of creating safe and respectful workplaces. Among those who don’t see sexual harassment as a major obstacle for women, significantly fewer (37%) say women do a better job creating a positive work environment. This relationship holds up among women and men alike. 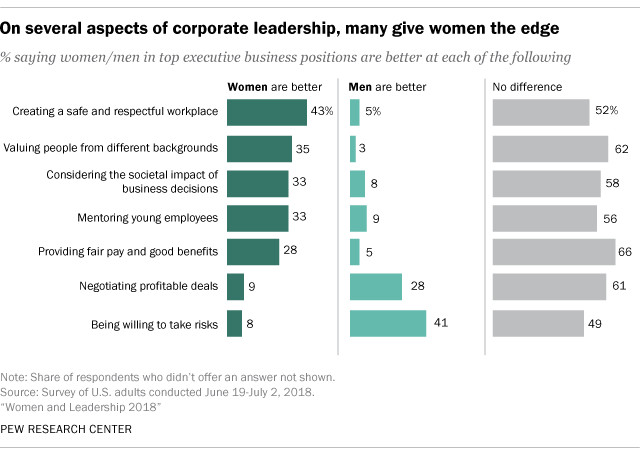 Women are also seen by some as having an advantage over men in other qualities and behaviors relating to workplace culture, such as valuing people from different backgrounds, considering the impact of business decisions on society, providing guidance and mentorship to young employees, and providing fair pay and good benefits. Majorities, however, say there is no difference between male and female leaders on these qualities.