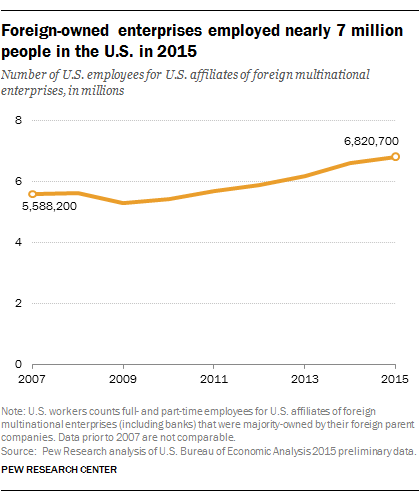 Foreign-owned companies employed 6.8 million workers in the United States in 2015, up 22% from 2007, according to preliminary data from the U.S. Bureau of Economic Analysis. The increase is notably larger than overall U.S. private employment growth, which was 3.6% over the same span.

Among foreign enterprises, British-owned companies employed the highest number of U.S. workers in 2015 (around 1.1 million), followed by companies with majority ownership in Japan (around 856,000) and France, Germany and Canada (each over 600,000). These five countries alone accounted for a majority (58%) of U.S. employment by foreign-owned enterprises in 2015 and have made up the top five since at least 2007, the earliest year for which comparable data are available.

Overall, foreign-owned companies accounted for 5.5% of all U.S. private sector employment in 2015, up from 4.7% in 2007. This analysis counts full- and part-time employees of foreign multinational enterprises’ U.S. affiliates (such as corporate branches) that were majority-owned by their foreign parents in 2015, the most recent year available. The BEA provides country-level data for 41 countries and territories, as well as broader regional and global totals.

For British-owned enterprises, transportation and hospitality and food services were among the top-employing industries in the U.S. Jobs in manufacturing (especially transportation) and wholesale trade stood out for Japan.

While companies majority-owned in the UK and Japan have led the pack for foreign direct investment, U.S. employment by Chinese-owned companies has grown exponentially since 2007, showing by far the largest percentage increase in employment. Chinese enterprises employed nearly 44,000 U.S. workers in 2015, more than 30 times greater than in 2007. By comparison, New Zealand (second fastest for U.S. employment growth) employed nearly five times as many U.S. workers in 2015 as in 2007 – paling in comparison with China.

Although Canada is consistently a top employer among U.S. affiliates, employment by the U.S.’s southern neighbor is increasing. Mexican-owned companies had nearly 80,000 U.S. workers on their payrolls in 2015, an 82% increase over 2007.

As the country with the most U.S.-affiliate employees, the UK also paid the most in total compensation ($84.9 billion) in 2015. Japan, the second-highest employer of U.S. affiliates, followed at $72.2 billion.

Foreign-owned companies overall paid $539.1 billion in total compensation to U.S. workers in 2015 – around $79,000 per employee. This figure includes all income received for work, including employer spending for employee benefit plans. Compensation by foreign companies was somewhat higher than the average among all U.S. private industry employers in 2015, which was around $63,600 per employee, according to Bureau of Economic Analysis data. 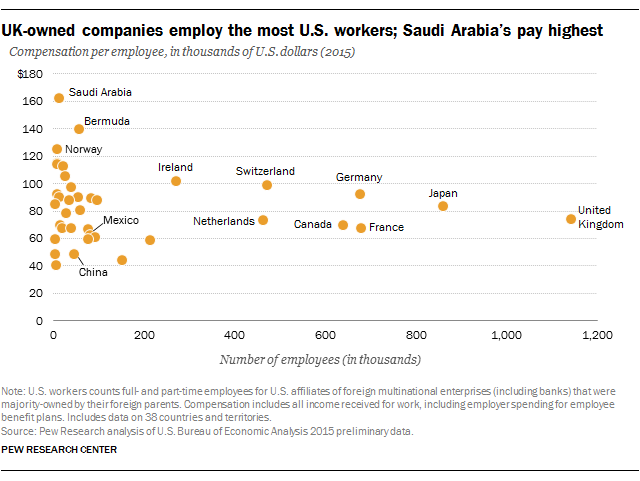 Seven other countries’ U.S. affiliates had an average compensation per worker of more than $100,000: Bermuda, Norway, Venezuela, South Africa, Israel, Finland and Ireland; Switzerland’s enterprises paid just under six figures per employee on average. Of these countries, only Irish- and Swiss-owned companies employed more than 100,000 workers.

Despite the recent surge in U.S. employment by companies majority-owned in China, compensation per worker by Chinese enterprises trended downward from 2007 and ranked near the bottom of countries and territories analyzed for 2015 at around $49,000 per employee.

Some states have more foreign direct investment than others

Foreign-owned companies contributed $894.5 billion to the U.S. gross domestic product in 2015, a 16% increase from 2007 and 6.4% of the total contribution to the GDP by U.S.-based private industry during this span. While 2007 is the earliest comparable year for these data, it also marks the start of the Great Recession, which appears to have had a larger impact on U.S. affiliates of foreign enterprises than on U.S. private businesses.

Salaries have risen for high-skilled foreign workers in U.S. on H-1B visas
More foreign grads of U.S. colleges are staying in the country to work
5 ways the U.S. workforce has changed, a decade since the Great Recession began
4 paths highly educated immigrants take to study and work in the U.S.
The financial risk to U.S. business owners posed by COVID-19 outbreak varies by demographic group