A combination of strong anti-refugee sentiment and above-average disdain for minority groups sets Hungary apart from many of its fellow European Union nations. But Hungarians and other Europeans widely agree on the importance of democratic values, despite what some see as Hungary’s slipping democracy under Prime Minister Viktor Orbán. 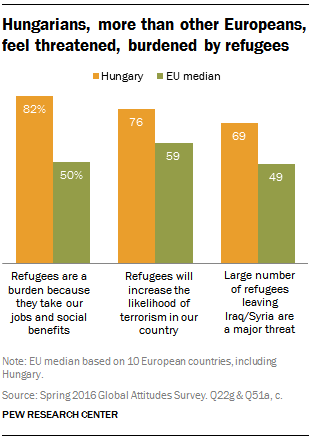 Observers expect Hungarians to deliver a resounding “no” to accepting EU-mandated refugee quotas in a referendum Sunday. Through the course of a highly controversial campaign, Orbán has been criticized for referring to refugees as “poison” and supporting campaign ads linking refugees to terrorism. Such controversy has exacerbated tensions within the EU on Hungary’s adherence to European values of pluralism and liberal democracy.

Despite the country’s labor shortage, Hungarians overwhelmingly see refugees as an economic albatross, according to a Pew Research Center survey conducted this spring. Roughly eight-in-ten believe refugees are a burden on their country because they take jobs and social benefits. Similarly, about three-quarters believe that refugees will increase the likelihood of terrorism in Hungary, and about seven-in-ten see the large influx of refugees from countries like Syria and Iraq as a major threat. These figures are much higher in Hungary than in almost every other EU nation surveyed. 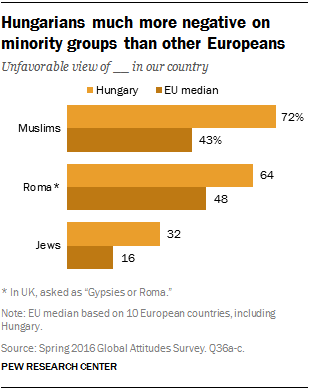 Hungarians are also much more likely than other Europeans to hold negative views of various minority groups. Nearly three-quarters hold an unfavorable view of Muslims in their country, and more than six-in-ten see Roma in a negative light. About a third express an unfavorable opinion of Jews – double the European median.

Hungary also ranks extremely high compared with other European nations when it comes to exclusionary views on national identity. Among those in 10 EU nations surveyed, only Greeks are more exclusionary in their views of what makes someone a true national of their country, according to our National Identity Index. 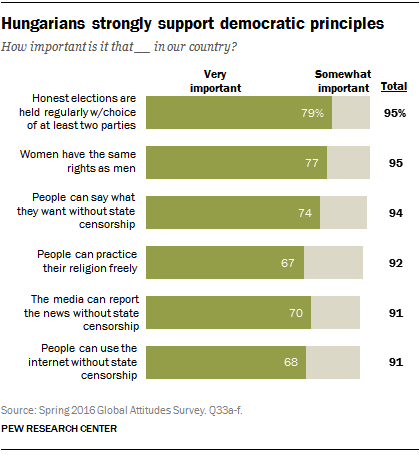 While Hungarians and other Europeans may not agree on refugees and minorities, there is wide consensus on the importance of democratic values. Large majorities in Hungary say it is very important to live in a country where each democratic principle we asked about is adhered to. In 2015, a median across six EU nations showed similarly positive views.

Hungarians are even more supportive of certain democratic principles than other Europeans. In 2015, a median of 61% across six EU nations said that living in a country where the media can report the news without state censorship was very important. In our 2016 survey, 70% of Hungarians said the same. This high rating comes on the heels of years of criticism of the Orbán government’s handling of press freedom and low ratings for Orbán’s handling of the media (only 30% approve). 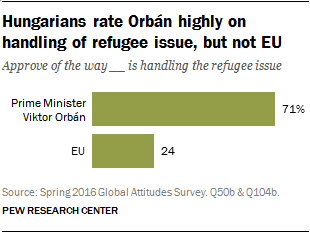 The only democratic tenet on which Hungarians fell below the 2015 EU median was gender equality (77% vs. 86% median). 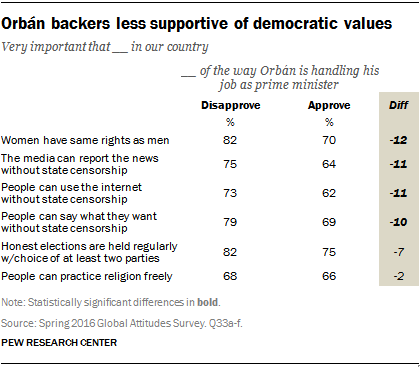 Hungarians give Orbán, with his anti-refugee stance, high marks for his handling of the refugee issue (71% approve). By contrast, only about a quarter say the same about the EU.

Supporters of Orbán are less likely to say that living in a country that upholds certain democratic values is very important to them. According to the Economist Intelligence Unit’s 2015 Democracy Index, democracy in Hungary has continued to slide under Orbán, and he himself has said that he would like to transform his country into an “illiberal state.”

Note: See here for topline results on views of various issues in Hungary and methodology.