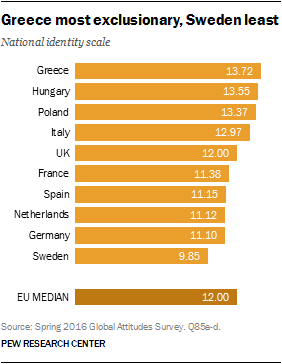 To further explore national identity across the countries surveyed, we developed an additive index. The index combines responses for the four survey questions that ask about national identity. Specifically, these questions ask how important each of the following items is to being truly of a particular country’s nationality: speaking the national language, sharing customs and traditions, being born in the survey country, and being a Christian.2 The internal consistency of the index was evaluated using a principal components analysis and Cronbach’s alpha reliability coefficient.

Index scores are only calculated for respondents who gave substantive answers to all four questions, comprising a large sub-sample (n=10,239) out of the total sample (n=10,491). Those who replied “Don’t know/Refused” to any question were not included in the index.

We report the mean score for each country here. On a scale of 4 to 16, index scores range between 9.85 in Sweden and 13.72 in Greece. The overall EU median for all valid responses is 12.