Europe is increasingly a region marked by cultural diversity and foreign-born populations. Across the 10 EU nations surveyed, the median share of immigrants in the population is 12.2%, according to a recent Pew Research Center analysis. However, the proportion of immigrants in individual countries ranges from as high as 18.3% in Sweden to as low as 1.6% in Poland. The share of immigrants is rising in some countries, mostly due to the large number of asylum seekers entering Europe in the past year. In Sweden and Hungary, for example, the portion of the population that is foreign born grew by 1.5 percentage points and 1.3 percentage points respectively between 2015 and 2016. At the same time, the proportion of the population that is foreign born has not grown at all in Poland and has actually declined by 0.1 percentage points in Spain over the same period. 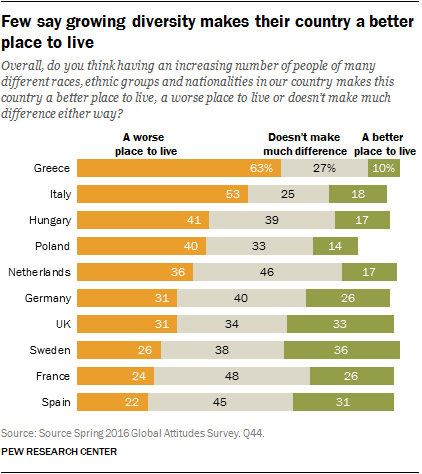 In this survey, publics were asked whether having an increasing number of people of many different races, ethnic groups and nationalities in their society makes their country a better place to live, a worse place to live or doesn’t make much difference either way. In no nation does a majority say increasing diversity is a positive for their country. At most, roughly a third in Sweden (36%), the UK (33%) and Spain (31%) describe growing racial, ethnic and national diversity in favorable terms.

More common is the view that cultural diversity is neither a plus nor a minus in terms of quality of life. This is the prevailing attitude in France, Germany, the Netherlands and Spain, where pluralities say growing diversity makes little difference in their quality of life. Meanwhile, the British public is split between those who see diversity as a positive, negative or non-factor for their country.

At the same time, more than half the public in Greece (63%) and Italy (53%) believe that growing diversity makes their country a worse place to live. 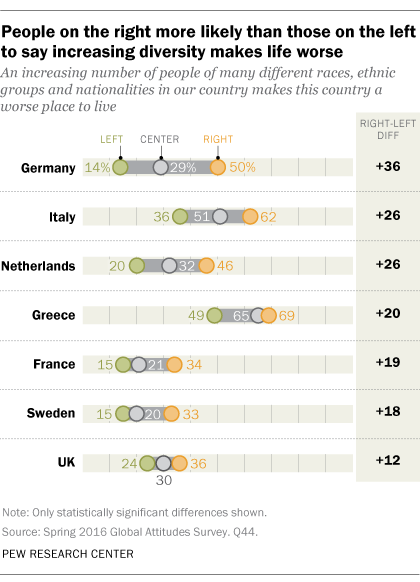 Views on the value of national diversity often divide along ideological lines. People who self-identify as being on the right of the ideological spectrum are significantly more likely than those on the left to say that growing diversity is detrimental to their country. The gap is greatest in Germany, where those on the right and left are 36 percentage points apart (50% on the right say diversity is bad for the nation, 14% on the left). In other countries, the ideological split is also substantial, including in Italy and the Netherlands (both 26 percentage points) and in Greece (20 points).

Party affiliation is also linked to views on cultural diversity. In the UK, for example, fully 64% of people who support the right-wing UK Independence Party (UKIP) say that a more racially, ethnically and nationally diverse society makes the UK a worse place to live. Only 32% of Conservative Party adherents and 19% of Labour Party supporters share that view. In France, 51% of those who feel closest to the anti-immigrant National Front say increasing diversity is bad for France. Just 34% of supporters of the Republicans and 11% of Socialist Party adherents agree. In Germany 62% of people who have a favorable opinion of the right-wing party Alternative for Germany (AfD) believe Germany is worse off because of growing numbers of people with different racial, ethnic, and national identities. And in Sweden, 65% of the public that holds a favorable view of the anti-immigrant Swedish Democrats voices the opinion that more diversity is making Sweden a worse place to live. 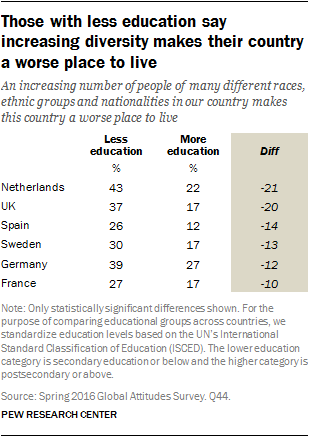 Views on diversity also differ based on the educational level of the respondent. Less-educated people are more critical of diversity than more-educated members of the public. In the Netherlands, 43% of people with a secondary education or less say an increasing number of people of many different races, ethnic groups and nationalities makes their country a worse place to live. Just 22% of those with more than a secondary education agree, a 21-point differential. There is a similar 20-point education gap in views of diversity in the UK, a 14-point gap in Spain and a 13-point divide in Sweden.

In their views toward cultural diversity, Europeans look very different from Americans. In a March 2016 Pew Research Center poll, 58% of Americans said having more people of many different races, ethnic groups and nationalities makes the U.S. a better place to live. Only 7% said increasing diversity makes life worse. 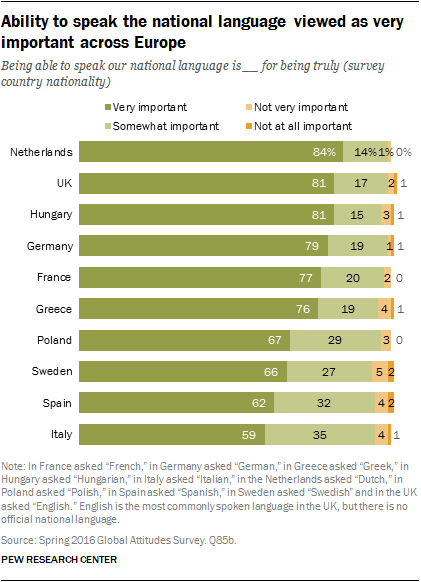 The European Union has 24 official languages and a number of other regional and minority languages among its 28 member states. And language facility is considered an important component of nationality across Europe. More than nine-in-ten people in all of the nations surveyed say that to be a true national of their country it is important to speak the country’s national language. Such sentiment is not lightly held. Majorities in all of these countries say it is very important to be able to converse in the local tongue. This includes 84% of the Dutch and 81% of the British and Hungarians. 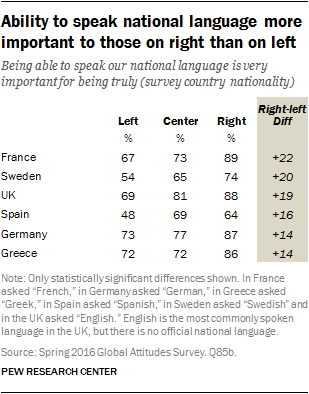 Despite this overwhelming belief that language is a strong requisite of nationality, some differences in the intensity of such feelings exist along ideological and demographic lines.

People on the right of the ideological spectrum are more likely than those on the left to say national language facility is very important. This gap is greatest in France (22 percentage points), Sweden (20 points) and the UK (19 points).

In some countries, people ages 50 and older are more likely than those ages 18 to 34 to strongly believe that the ability to speak the official language is very important. This generation gap on language is 23 percentage points in Sweden, 18 points in the UK and 17 points in Spain.

Americans also see language facility as important to national identity. Roughly nine-in-ten people in the United States believe it is very important (70%) or somewhat important (22%) to speak English to be a true American. 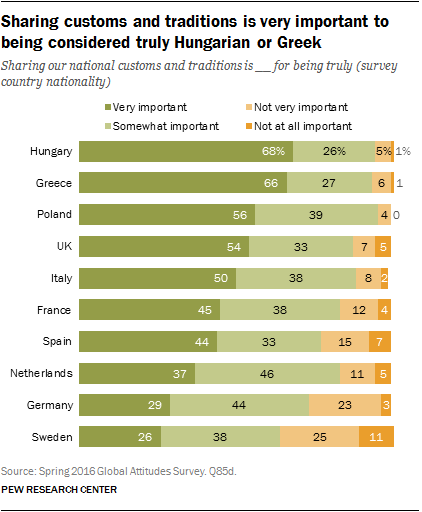 Most Europeans believe that adhering to native customs and traditions is also important in defining national identity. Overwhelming majorities in all 10 EU countries express the view that sharing such aspects of culture is important to being a true German or Pole or Swede and so forth.

But there is less intensity to such sentiment than there is about speaking the national language. Half or more of respondents in only five countries say sharing customs and traditions is very important. This strong sentiment linking nationality and culture is most popular in Hungary (68%) and Greece (66%). Notably, 36% of Swedes and 26% of Germans express the view that it is not very important or not important at all to share native customs and traditions to be considered Swedish or German.

There is a relatively deep ideological divide over the relationship between adherence to local culture and true nationality. Those on the right are significantly more likely than those on the left to link the two issues in a number of countries. In the UK this right-left differential is 30 percentage points. In France the gap is 29 points and in Poland it is 21 points. 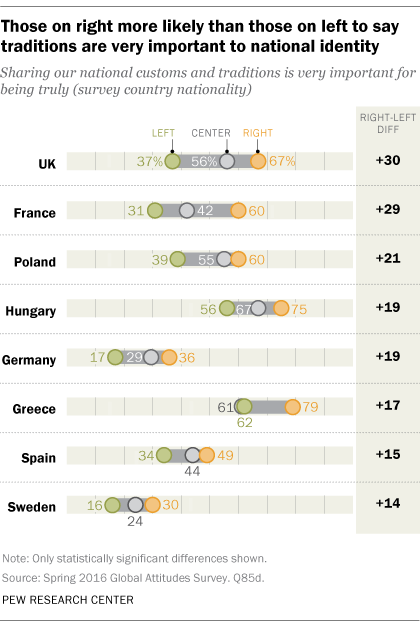 People of different generations disagree on the importance of customs and traditions to national identity. In eight of 10 nations surveyed, those ages 50 and older are more likely than those ages 18 to 34 to say adhering to native culture is very important. This is the case in the UK (24 percentage points), France (23 points) and Greece (21 points).

Educational background also matters in a person’s views of the link between culture and national identity. People with less education are more likely than those with a higher level of education to believe that customs and tradition are very important to nationality. This educational differential is 20 points in France and Spain and 19 points in the UK.

More than eight-in-ten Americans also think that it is very important (45%) or somewhat important (39%) to share U.S. customs and traditions to be truly American. 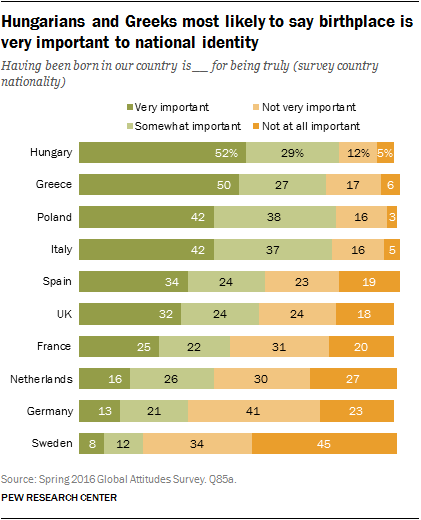 No European country accords citizenship based simply on the fact that a person was born in the territory of that state. Nevertheless, in six of 10 EU nations, majorities say it is very or somewhat important to have been born within a country’s borders in order to be considered a true national of that society. The countries where such sentiment is strongest are Hungary (52% say place of birth is very important), Greece (50%), Poland (42%) and Italy (42%). Notably, in the Netherlands (16%), Germany (13%) and Sweden (8%), fewer than one-in-five believe birthplace is a very important component of national identity.

In some nations ideology plays a major role in such views. People on the right are much more likely than those on the left to say place of birth is very important in Greece (31 percentage points), the UK (24 points) and Italy (23 points). 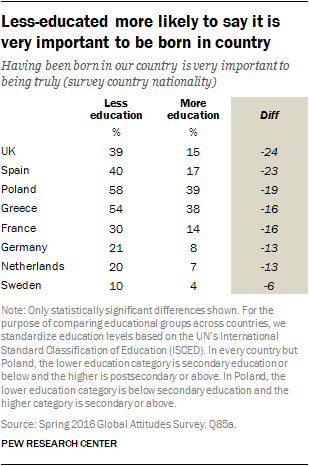 Education also plays a role in public views on the relationship between being native born and national identity. In eight of the 10 EU countries, people with less education are significantly more likely than those with more education to believe that it is very important to have been born in their country to be considered a true national of that society. This educational differential is 24 percentage points in the UK, 23 points in Spain and 19 points in Poland. 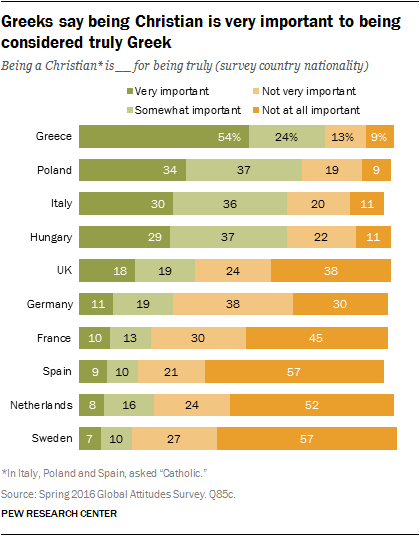 In Europe today, there are widely disparate views on the importance of religion to national identity.

In four of the 10 countries surveyed, strong majorities believe it is important to be Christian to be considered a true national. This includes 54% of Greeks who say religion is very important to Greek identity. In contrast, in the other six countries polled, most people think religion is not important to national identity, including about half or more in Spain (57%), Sweden (57%) and the Netherlands (52%) who say it is not at all important. 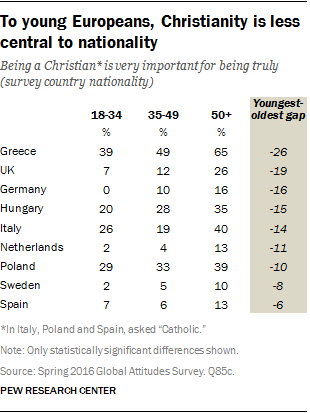 Views of the importance of religion to nationality often divide along generational lines. People ages 50 and older are significantly more likely than those ages 18 to 34 to say that being a member of the dominant religion in their country is very important to national identity. This generation gap is largest in Greece: 65% of older Greeks say it is important but only 39% of younger Greeks agree. The differential is 19 percentage points in the UK, 16 points in Germany and 15 points in Hungary.

People on the right of the ideological spectrum are also often more likely than those on the left to voice the view that religion is very important to nationality. This right-left divide is particularly prominent in Greece (26 points) and Poland (21 points). The ideological left is quite secular in Germany (5% say religion is very important to nationality) and Spain (6%). By comparison, people on the left in Greece (40%), Hungary (26%), Italy (24%) and Poland (21%) say being a member of the dominant local religion is important to be truly Greek, Hungarian, Italian or Polish.