Pope Francis is scheduled to celebrate Mass on an enormous scale Sunday, with 2 million people expected to gather on a mile-long parkway in downtown Philadelphia. And nearly 1,500 priests and deacons will be on hand to help distribute Holy Communion.

In Communion, Catholics receive bread and wine. The church teaches that when the bread and wine are consecrated by an ordained priest, they become the actual body and blood of the risen Christ; a theological explanation for this process, known as transubstantiation, has been supported by official church teaching since the 16th century.

Here are five facts about U.S. Catholics and Communion: 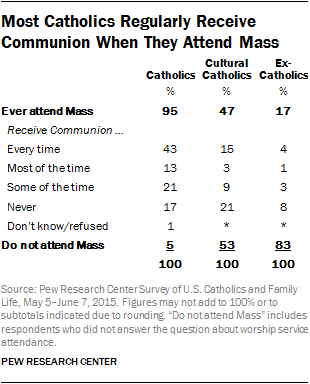 The church recommends that Catholics receive Communion every time they attend Mass, and about four-in-ten Catholics (43%) say they do so. Overall, 77% of Catholics report taking Communion at least some of the time when they attended Mass, while 17% say they never do so.

3Catholics who currently are cohabiting or have divorced and remarried without seeking an annulment (and thus are presumably ineligible to receive Communion) receive the sacrament less frequently than other Catholics. However, roughly two-thirds of Catholics who are cohabiting or divorced and remarried still do participate in the rite at least some of the time. Indeed, 34% say they receive Communion every time they go to Mass, 7% say they accept the sacrament most of the time and 23% take Communion some of the time. 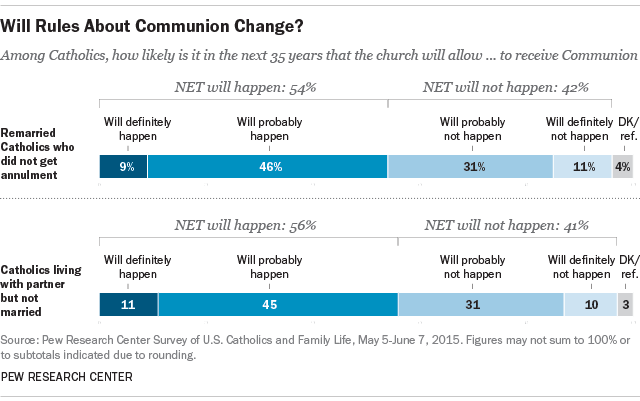