About 4 million unauthorized immigrants are eligible for temporary deportation relief under President Obama’s new executive action, but how many will take advantage of the offer? 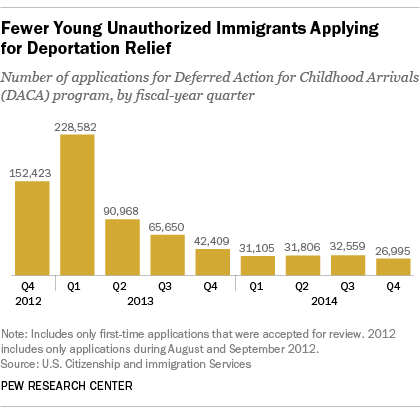 A previous program may offer some insights. One way immigrants may qualify for relief is under the Deferred Action for Childhood Arrivals program, which started in 2012 and is now expanding. In that program, applications surged after the program’s launch and trailed off over time. Today, nearly two-thirds (64%) of the estimated 1.1 million unauthorized immigrants who are eligible have had their applications accepted for review.

DACA offers deportation relief and work authorization to those who came to the U.S. as children. So far, about 702,000 unauthorized immigrants have had their applications accepted for review since the program began in August 2012, according to recently released U.S. Citizenship and Immigration Services data showing program applications, approvals and renewals through Sept. 30, 2014. Of the applicants, 87% have been approved for the renewable two-year permits.

With the first wave of permits beginning to expire, the government is starting to receive renewal applications. So far, more than 22,000 of the initial DACA recipients have had their applications for renewal approved.

States with the largest number of unauthorized immigrants also have the most people applying for DACA. Two states, California and Texas, have more than one-third, or 4.1 million, of the nation’s unauthorized immigrants. For the DACA program, California and Texas account for 45% of all initial applications, with 199,781 and 115,614 applications, respectively.