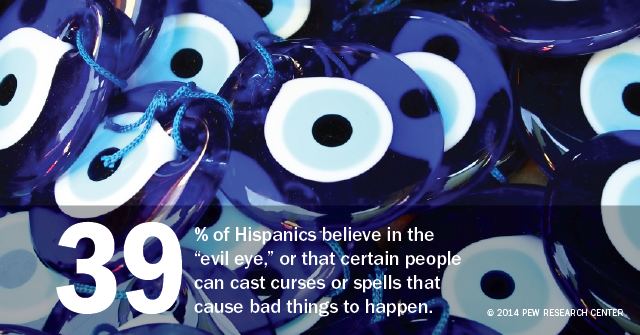 A majority of American Catholics see Pope Francis as a major change for the Catholic Church. But in one area, Francis may be the most traditional pope in a generation: He has “not only dwelled far more on Satan in sermons and speeches than his recent predecessors have,” according to a recent Washington Post article, “but also sought to rekindle the Devil’s image as a supernatural entity with the forces of evil at his beck and call.”

Francis is the first pope from Latin America, where “mystical views of Satan still hold sway in broad areas of the region,” according to the Post. Last week, Catholics from 33 countries gathered in Vatican City for a conference on exorcism. The Post estimated the number of “official exorcists” to be between 500 and 600, “the vast majority operating in Latin America and Eastern Europe.”

While we do not have data on how many Americans overall believe in the presence of spirits, a recent Pew Research survey found widespread belief in this among Latinos in the United States. More than half (57%) said that people can be possessed by spirits, and 44% said magic, sorcery or witchcraft can influence people’s lives.

In our survey, about one-in-eight Hispanic Catholics in the U.S. (12%) said they have witnessed an exorcism. Even more Hispanic Protestants (37%) – including 59% of Pentecostals – said they have seen “the devil or evil spirits being driven out of a person.”

Varying percentages of U.S. Hispanics also hold other spiritual beliefs, which in some cases may reflect a mix of Christian and indigenous or Afro-Caribbean influences.

Roughly four-in-ten U.S. Hispanics (39%), including a similar share of Hispanic Catholics, said they believe in the “evil eye,” or that certain people can cast curses or spells that cause bad things to happen. A smaller share (15%) said they have had witchcraft or black magic practiced on them or someone close to them.