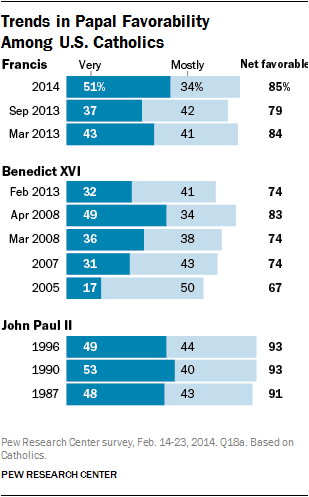 One year into his pontificate, Pope Francis remains immensely popular among American Catholics and is widely seen as a force for positive change within the Roman Catholic Church. More than eight-in-ten U.S. Catholics say they have a favorable view of the pontiff, including half who view him very favorably. The percentage of Catholics who view Francis “very favorably” now rivals the number who felt equally positive about Pope John Paul II in the 1980s and 1990s, though Francis’ overall favorability rating remains a few points shy of that of the long-serving Polish pope. 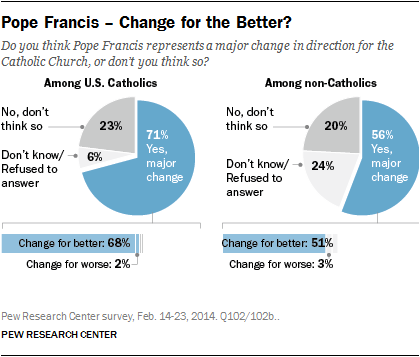 But despite the pope’s popularity and the widespread perception that he is a change for the better, it is less clear whether there has been a so-called “Francis effect,” a discernible change in the way American Catholics approach their faith. There has been no measurable rise in the percentage of Americans who identify as Catholic. Nor has there been a statistically significant change in how often Catholics say they go to Mass. And the survey finds no evidence that large numbers of Catholics are going to confession or volunteering in their churches or communities more often. 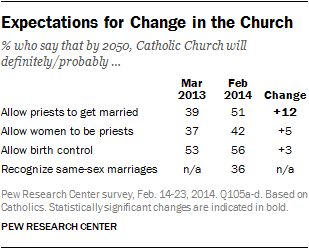 The survey also finds growing numbers who expect that in the near future the Catholic Church will allow priests to get married; 51% think the church will make this change by the year 2050, up 12 percentage points from the days immediately following Francis’ election a year ago. But there has been less change in Catholics’ expectations about other church teachings. Roughly four-in-ten Catholics think that in the coming decades the church either definitely or probably will allow women to become priests, about the same number who held this expectation a year ago. And 56% of Catholics think the church will soon allow Catholics to use birth control, very similar to the 53% who said this last year. 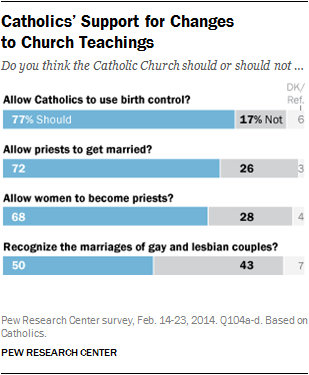 These are among the key findings of a new Pew Research Center survey, conducted Feb. 14-23 on landlines and cellphones among a national sample of 1,821 adults (including 351 Catholics). The survey also finds that eight-in-ten Catholics give Pope Francis excellent or good marks for spreading the Catholic faith and standing up for traditional moral values, and three-quarters say he has done an excellent or good job addressing the needs and concerns of the poor. But Francis gets lower marks for his handling of the sex abuse crisis, with 54% of Catholics giving him an excellent or good rating for his handling of the issue. One year ago, 70% of U.S. Catholics said that addressing the sex abuse scandal should be “a top priority” for the new pope, far more than said the same about standing up for traditional moral values, spreading the Catholic faith or other issues. 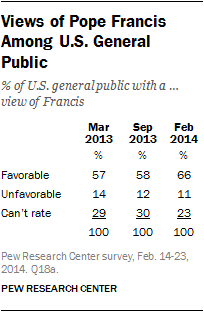 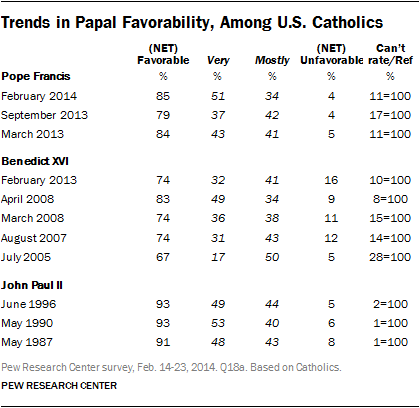 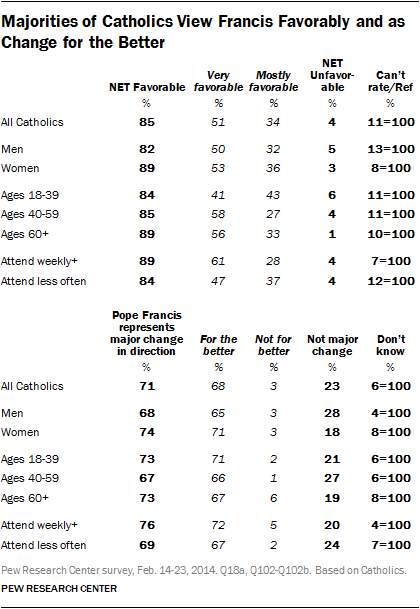 There also is broad consensus among Catholics that Francis represents a major change in direction for the church, and that this is a change for the better. Large majorities of men and women, Catholics in all adult age groups, and both regular Mass attenders and more infrequent Mass-goers express this view.

Pope Francis gets positive ratings on a range of papal responsibilities, though one of his lower ratings is in an area U.S. Catholics have named as a top priority: addressing the clergy sex abuse scandal. 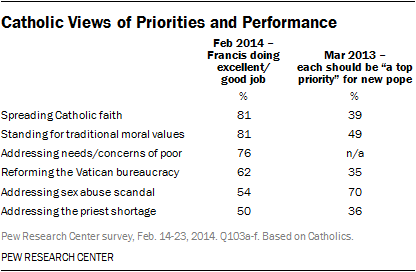 Six-in-ten Catholics give Francis positive marks for reforming the Vatican bureaucracy, a task ranked as a top priority by 35% of Catholics last year. Francis gets his lowest ratings for his handling of the clergy sex abuse crisis (54% excellent/good) and for addressing the priest shortage (50% excellent/good). Last March, 70% of Catholics said addressing the sex abuse scandal should be “a top priority” for the new pope, far more than said the same about any other issue.

Evidence of a “Francis Effect”?

Many commentators have speculated about Francis’ effect on Catholics in the U.S. and around the world. The survey finds he is widely admired, but has his leadership sparked increased devotion among the faithful or inspired former Catholics to return to the church? 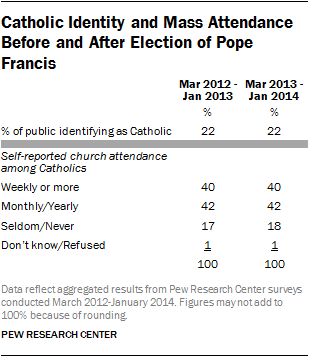 The evidence on this question is mixed. Pew Research surveys conducted since Francis was elected find no change in the share of U.S. adults who identify as Catholics: 22% of Americans describe themselves as Catholic today, identical to the 22% who did so in the year preceding Francis’ election. Aggregated data from Pew Research surveys also find no change in self-reported rates of Mass attendance among Catholics. In the year since Francis became pope, 40% of U.S. Catholics say they attend Mass at least once a week, unchanged from the months immediately preceding the papal transition. 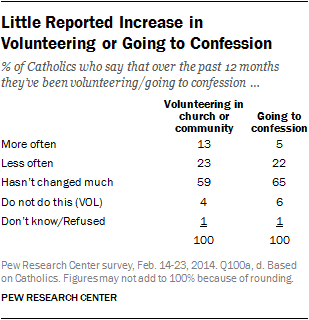 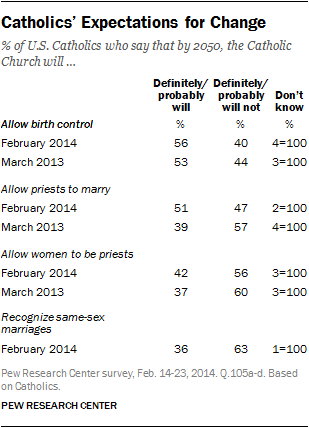 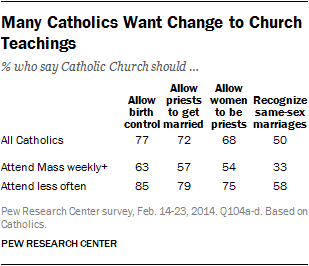 The analysis in this report is based on telephone interviews conducted Feb. 14-23, 2014, among a national sample of 1,821 adults, 18 years of age or older, living in all 50 U.S. states and the District of Columbia, including an oversample of young adults ages 18-33 (481 respondents were interviewed on a landline telephone, and 1,340 were interviewed on a cellphone, including 786 who had no landline telephone). The survey was conducted by interviewers at Princeton Data Source under the direction of Princeton Survey Research Associates International. A combination of landline and cellphone random digit dial samples were used. In order to increase the number of 18-to 33-year-old respondents in the sample, additional interviews were conducted with that cohort by screening a separate random digit dial cell sample. Both the landline and cellphone samples were provided by Survey Sampling International. Interviews were conducted in English and Spanish. Respondents in the landline sample were selected by randomly asking for the youngest adult male or female who is now at home. Interviews in the cell sample were conducted with the person who answered the phone, if that person was an adult 18 years of age or older. For detailed information about our survey methodology, see http://pewresearch.org/politics/methodology/.

The combined landline and cellphone sample are weighted using an iterative technique that matches gender, age, education, race, Hispanic origin and nativity, and region to parameters from the 2012 Census Bureau’s American Community Survey and population density to parameters from the Decennial Census. The sample also is weighted to match current patterns of telephone status and relative usage of landline and cellphones (for those with both), based on extrapolations from the 2013 National Health Interview Survey. The weighting procedure also accounts for the fact that respondents with both landline and cellphones have a greater probability of being included in the combined sample and adjusts for household size among respondents with a landline phone. Sampling errors and statistical tests of significance take into account the effect of weighting.

The following table shows the unweighted sample sizes and the error attributable to sampling that would be expected at the 95% level of confidence for different groups discussed in the report and accompanying detailed tables. 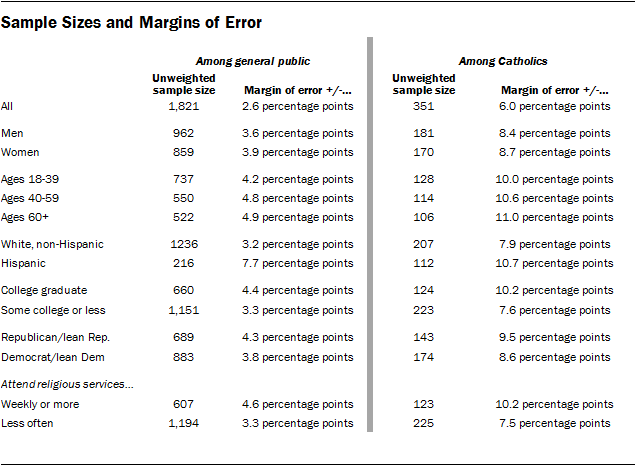 Evaluations of Pope FrancisEvidence of a “Francis Effect”?About the Survey