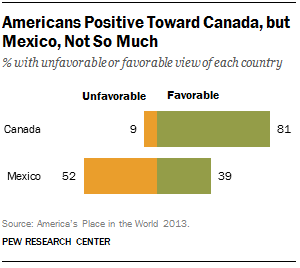 President Obama visits Mexico on Wednesday for what has become known as the “Three Amigos Summit” with Canadian Prime Minister Stephen Harper and Mexican President Enrique Peña Nieto. It comes at a time when the U.S. public has a positive view of Canada, but more lukewarm feelings toward Mexico.

Today’s meeting will focus on a host of issues, including trade since the three countries are all party to negotiations over the Trans-Pacific Partnership, a trade agreement which is intended to reduce tariffs on certain goods and services. Mexico sees the treaty as a vehicle to better compete globally. But Obama is facing opposition from critics who say the agreement will result in economic losses like those some claim resulted from the North American Free Trade Agreement, which took effect 20 years ago.

Only 39% of Americans expressed a favorable view of Mexico in a Pew Research Center survey conducted last October-November. This represents a substantial rise in unfavorable opinions of America’s southern neighbor since 2007, when the balance of opinion toward Mexico was positive (47% favorable, 37% unfavorable). In addition, Democrats are more likely than Republicans to view Mexico favorably, with 44% of Democrats holding a positive impression while just three-in-ten Republicans (30%) say the same.

When Obama visited Mexico in May last year, about two-thirds (66%) of Mexicans regarded the U.S. favorably. In 2010, when the immigration debate in the U.S. was at fever pitch because of Arizona’s strict immigration law, positive views of the U.S. dropped below the 50% mark. As of spring 2013, about half of Mexicans (49%) had confidence in Obama to do the right thing in world affairs, compared with the 55% who held that view in 2009.

Seven-in-ten Mexicans in last year’s survey saw economic ties between the U.S. and Mexico as a good thing. An equal number said the U.S. had a great deal or fair amount of influence on economic conditions in their country, but there were mixed views among those about whether this was a good thing: 47% expressed a positive view while 40% had a negative one.

Meanwhile, the U.S. public sees Canada in a much more positive light with 81% of Americans having a favorable view of their northern neighbor, according to a fall 2013 survey. This represents the highest favorability levels of any country on the survey, outstripping Britain (79% favorable), Japan (70%), Germany (67%) and Israel (61%).

One specific irritant in the U.S.-Canadian relationship is the battle over whether to build the Keystone XL pipeline which would carry Canadian oil from Alberta to U.S. Gulf Coast refineries. Canadian leaders have been frustrated by how long the decision has taken. A State Department report last month found that the pipeline would unlikely have an effect on greenhouse gas emissions.

On this issue, Obama may not be bucking public opinion if he gives the pipeline a green light. A survey last March found 66% of Americans in favor of building the pipeline, including 82% of Republicans, 70% of independents and 54% of Democrats. Only liberal Democrats were in opposition, with 48% opposed and 42% in favor.

As of spring 2013, 64% of Canadians had a favorable view of the U.S. However, Canadians’ confidence in Obama to do the right thing in international matters was far higher at 81% than it was in Mexico. But a sticking point for Canadians is their view of U.S. willingness to take their country’s interests into consideration when making decisions — only 31% of Canadians held that view last year, even before the most recent delays of the Keystone XL pipeline approval process.

The U.S. in one word: Canadians say ‘Trump,’ Mexicans point to ‘money’ and ‘work’

Americans have mixed views of Mexico, ‘warmer’ feelings toward Canada

9 charts on how the world sees President Trump

Obama to meet Latin American leaders amid positive views of U.S. in the region