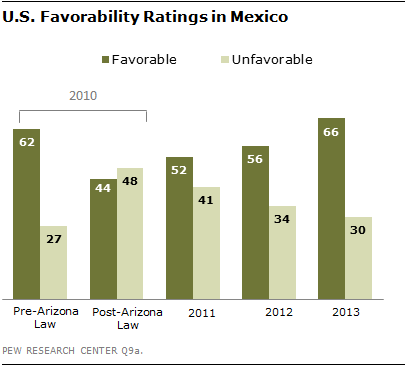 On the eve of President Barack Obama’s visit to Mexico, the United States is enjoying a resurgence of good will among the Mexican public, with a clear majority favorably inclined toward their northern neighbor and more now expressing confidence in Obama.

A national opinion survey of Mexico by the Pew Research Center, conducted March 4-17 among 1,000 adults, finds that roughly two-thirds (66%) of Mexicans have a favorable opinion of the U.S. – up from 56% a year ago and dramatically higher than it was following the passage of Arizona’s restrictive immigration law in 2010, when favorable Mexican attitudes toward the United States slipped to 44%.

Obama also receives higher ratings than he did in recent years. About half (49%) of Mexicans express confidence in the American president to do the right thing when it comes to world affairs, compared with 42% who said the same in 2012 and 38% in 2011. Still, Mexicans’ confidence in Obama has yet to return to the level in his first days in office in 2009, when 55% gave him a high rating. 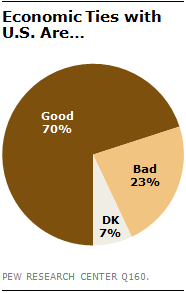 Bilateral issues, particularly the deepening of economic and commercial relations between the U.S. and Mexico, are expected to be among the key items on the agenda when Obama meets with Mexican President Enrique Peña Nieto this week. The survey finds that, overall, 70% of Mexicans consider the deep economic ties between the two countries to be good for Mexico, down slightly from 76% in 2009, when Pew Research last asked this question. 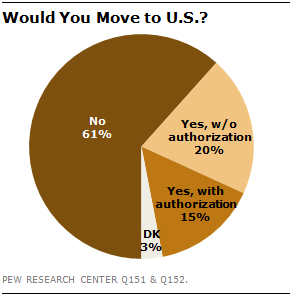 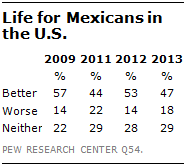 Mexicans are less likely than they were a year ago to say that people from their country who move to the U.S. have a better life there; 47% say life is better in the U.S., compared with 53% in 2012. About one-in-five (18%) say Mexicans have a worse life in the U.S., while 29% say it is neither better nor worse. However, among those who have close friends or relatives living in the U.S., 70% say these friends or relatives have achieved their goals, while just 25% believe they have been disappointed.

Three-in-ten Mexicans say they personally know someone who went to the U.S. but returned to Mexico because the person could not find work. About a quarter (27%) know someone who has been deported or detained by the U.S. government for immigration reasons in the last 12 months. 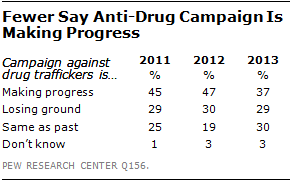 Less often than a year ago, Mexicans say their government is making progress in its campaign against drug traffickers; 37% say this is the case, compared with 47% in 2012. An additional 29% now say the government is losing ground against the cartels, and 30% see no change in the way things are going. As in the past, Mexicans overwhelmingly support the use of the Mexican army to fight drug traffickers; 85% are in favor of this approach. 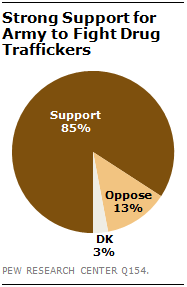 There is also support for some cooperation from the U.S. in the fight against Mexican drug cartels. About three-quarters (74%) would welcome U.S. assistance in training Mexican police and military personnel. A majority (55%) would also approve of the U.S. providing money and weapons to the country’s police and military, although this position has lost some support in recent years; 61% backed this form of U.S. assistance in 2012 and 64% did so in 2011. However, there is little enthusiasm for the deployment of U.S. troops to Mexico to fight drug traffickers; just 34% of Mexicans would welcome this approach, while 59% would oppose it.

Most Mexicans (56%) blame both the U.S. and their own country for the drug violence in Mexico; 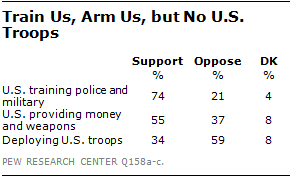 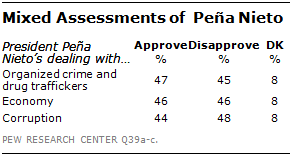 Peña Nieto, whose election as president in 2012 marked the return to power of the Institutional Revolutionary Party (PRI) after 12 years in the opposition, is generally viewed positively in Mexico; 57% say he is having a good influence on the way things are going in the country, while 38% see his influence as bad.

Not surprisingly, on all three issues, those who are affiliated with the PRI offer more positive ratings of the president than do those who are affiliated with Felipe Calderón’s National Action Party (PAN). At least six-in-ten supporters of the PRI approve of the president’s handling of the economy (68%), organized crime and drug traffickers (62%) and corruption (62%). In contrast, 46% of PAN supporters approve of the way he is dealing with the economy and corruption, and 51% give him high marks for his handling of drug cartels.