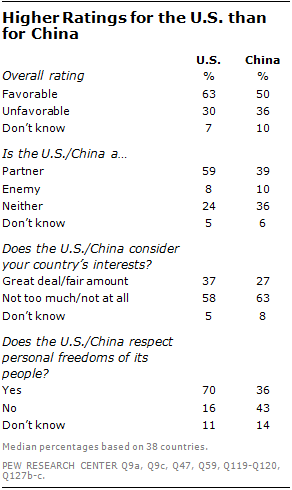 Publics around the world believe the global balance of power is shifting. China’s economic power is on the rise, and many think it will eventually supplant the United States as the world’s dominant superpower.

However, China’s increasing power has not led to more positive ratings for the People’s Republic. Overall, the U.S. enjoys a stronger global image than China. Across the nations surveyed, a median of 63% express a favorable opinion of the U.S., compared with 50% for China.

Globally, people are more likely to consider the U.S. a partner to their country than to see China in this way, although relatively few think of either nation as an enemy. America is also seen as somewhat more willing than China to consider other countries’ interests. Still, both of these world powers are widely viewed as acting unilaterally in international affairs.

And the military power of both nations worries many. China’s growing military strength is viewed with trepidation in neighboring Japan, South Korea, Australia and the Philippines. Meanwhile, the Obama administration’s use of drone strikes faces broad opposition – half or more in 31 of 39 countries disapprove of U.S. drone attacks against extremist groups.

Respecting individual liberty remains the strong suit of America’s image. Even in many nations where opposition to American foreign policy is widespread and overall ratings for the U.S. are low, majorities or pluralities believe individual rights are respected in the U.S. Across the nations surveyed, a median of 70% say the American government respects the personal freedoms of its people. In contrast, a median of only 36% say this about China.

Of course, attitudes toward the U.S. and China vary considerably across regions and countries. In Europe, the U.S. gets mostly positive ratings. During the presidency of George W. Bush, anti-Americanism was common throughout much of Europe, but President Barack Obama has been consistently popular among Europeans, and since he took office in 2009, Obama’s popularity has given America’s image a significant boost in the region.

Currently, more than six-in-ten in Italy, Poland, France and Spain have a favorable opinion of the U.S. European perceptions of China are much less positive – among the eight European Union nations polled, Greece is the only one in which a majority expresses a favorable view of China. Moreover, ratings for China have declined significantly over the last two years in a number of EU countries, including Britain, France, Poland and Spain.

As has been the case in recent years, America’s image is the most negative in parts of the Muslim world, especially Pakistan (11% favorable), Jordan (14%), Egypt (16%), and the Palestinian territories (16%). Only 21% of Turks see the U.S. positively, although this is actually a slight improvement from last year’s 15%. But the Muslim world is hardly monolithic, and America receives largely positive ratings in predominantly Muslim nations such as Senegal in West Africa and Indonesia and Malaysia in Southeast Asia.

Elsewhere in the Asia/Pacific region, the U.S. receives particularly favorable reviews in the Philippines, South Korea and Japan, and a majority or plurality in all three countries say it is more important to have strong ties with the U.S. than with China.

By a wide margin, the Japanese give China its worst ratings – only 5% express a positive view. Territorial disputes have increased tensions between these two historic rivals over the past few years, and 82% of Japanese describe these disputes as a big or very big problem.

Territorial frictions with China are also considered major problems in South Korea and the Philippines, although unlike Japan, South Koreans and Filipinos are divided in their overall assessments of China. Even though roughly seven-in-ten Australians (71%) are concerned about the growing strength of the People’s Liberation Army, a majority (58%) nonetheless has a favorable opinion of China, their country’s largest trading partner.

Chinese investment in Latin America and sub-Saharan Africa has increased significantly over the past decade, and views toward China are largely positive in both regions. Attitudes toward the U.S. also tend to be favorable, and overall the U.S. receives slightly higher ratings than China in these two regions. 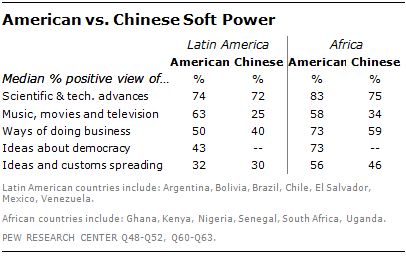 Additionally, America enjoys a soft power advantage over China among Latin Americans and Africans. American scientific and technological achievements, ways of doing business and popular culture are embraced by many. The appeal of U.S. soft power is generally stronger today in Latin America and Africa than it was during the final years of the Bush administration.

These are among the major findings of a new survey by the Pew Research Center conducted in 39 countries among 37,653 respondents from March 2 to May 1, 2013.1 The survey also finds rising tensions between the American and Chinese publics. Just 37% of Americans express a positive view of China, down from 51% two years ago. Similarly, ratings for the U.S. have plummeted in China – in a 2010 poll conducted a few months after a visit to China by President Obama, 58% had a favorable impression of the U.S., compared with 40% today. Young people in both countries express more positive attitudes about the other, a finding that is part of a broader pattern – in many countries, both the U.S. and China receive more favorable marks from people under age 30. 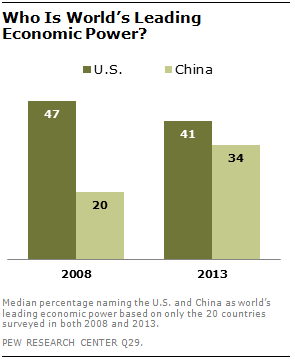 Since the 2008 financial crisis, perceptions about the economic balance of power in the world have been shifting. Looking at the 20 nations surveyed in both 2008 and 2013, the median percentage naming the U.S. as the world’s leading economic power has declined from 47% to 41%, while the median percentage placing China in the top spot has risen from 20% to 34%.

This trend has been especially apparent among some of America’s closest allies in Western Europe. Today, for example, 53% in Britain say China is the leading economy; just 33% name the U.S. Roughly six-in-ten Germans (59%) say China occupies the top position, while only 19% think the U.S. is the global economic leader (14% say it is the EU).

Many believe China’s economic might is growing, but the U.S. is still generally seen as the world’s leading economy in Latin America, Africa and in much of China’s own backyard. More than six-in-ten in Japan (67%), the Philippines (67%), and South Korea (61%) name the U.S. as the leading economic power.

However, even in many countries where America is still seen as the top economic power, most believe China will someday become the leading overall superpower. In 23 of 39 nations, majorities or pluralities say China either already has replaced or eventually will replace the U.S. as the top superpower. This view is more common now than it was in 2008, when Pew Research first asked this question. Today, majorities or pluralities in only six countries believe China will never replace the U.S.

Throughout much of Europe, the prevailing view is that China will ultimately eclipse the U.S. as the leading superpower. And this is the majority or plurality view in five of the seven Latin American nations polled.

Two-thirds of the Chinese believe their country either already has or someday will supplant the U.S. Americans are divided: 47% say China has or will replace the U.S., and 47% say this will never happen. American opinion has shifted significantly since 2008, when only 36% said China would become the top global power and 54% believed it would never replace the U.S.

In the current poll, half or more of those surveyed have a positive opinion of the U.S. in 28 of 38 nations. The percentage of people who give the U.S. a positive rating has increased significantly in 19 of the 28 countries polled both this year and in 2007, when the Pew Research Center last conducted a global survey on this scale.

America’s improved image is coincident with Barack Obama assuming the presidency in 2009. Obama has largely received more positive ratings than his predecessor, George W. Bush. Today, at least half of those polled in 24 of 39 nations say they have confidence in the American president to do the right thing in world affairs. Eight-in-ten or more hold this view in Germany (88%), the Philippines (84%), France (83%), Canada (81%) and Kenya (81%).

Even so, Obama’s ratings are lower now than when he first took office. The decline has been especially steep in China, where confidence in the American president today (31%) is half of what it was in 2009 (62%).

Similarly, support for Obama’s policies has waned since the beginning of his presidency. For instance, even though he remains largely popular in Europe, approval of his international policies has declined by double digits since 2009 in Britain, Poland and France.

Drone strikes, one of the key features of Obama’s national security policy, are widely opposed across the globe. In 31 of 39 nations, at least half disapprove of U.S. drone attacks against extremists in countries such as Pakistan, Yemen and Somalia. In 12 countries, eight-in-ten or more hold this view. The only countries in which a majority supports American drone strikes are Israel (64%), Kenya (56%), and the U.S. itself (61%).

In 19 of 38 countries, at least half of those surveyed give China a favorable rating. In only 16 countries do at least half consider China a partner.

One of the major challenges for China’s global image is that few believe the Chinese government respects the personal freedoms of its people. In only 11 countries in the survey do at least half hold this view. In contrast, majorities or pluralities in 37 of 39 nations believe the American government respects the individual freedoms of its citizens.

Another challenge for China’s image is that around the world the prevailing view is that China acts unilaterally in world affairs, pursuing in its own interests and not taking into account the interests of other countries when making foreign policy decisions. In 26 of 38 nations, more than half say China considers their interests not too much or not at all.

In this respect, China faces the same challenge the U.S. has faced for years, during the presidencies of both George W. Bush and Barack Obama. Over the past decade, and again in this year’s poll, most of those surveyed say the U.S. ignores their interest when it is making foreign policy.

Next: Chapter 1. Attitudes toward the United States
← Prev Page
You are reading page1Page2Page3Page4Page5Page6Page7Page8
Next Page →