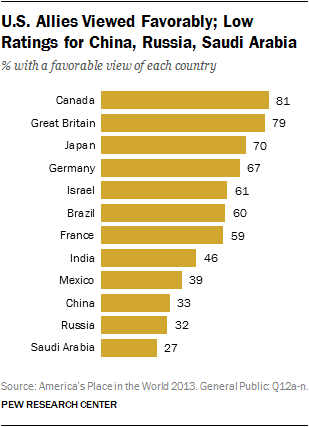 In contrast, only about a third view China (33%) and Russia (32%) favorably and just 27% have a favorable view of Saudi Arabia.

Opinions about most of the 12 countries included in the survey have not changed a great deal in recent years. Favorable ratings for France, Germany and Canada are much higher than they were a decade ago, amid tensions over the U.S. war in Iraq. Currently, 59% view France favorably, which is little changed from a 2009 Pew Global Attitudes Project survey (62%). In 2003, just 29% viewed France favorably.

Over the past few years, unfavorable opinions of both Russia and Mexico also have risen substantially. Currently, 39% view Mexico favorably while 52% have an unfavorable opinion; in 2007, the balance of opinion toward Mexico was positive (47% favorable, 37% unfavorable). A majority of Americans (54%) view Russia unfavorably, up from 43% last year and 35% in 2007. 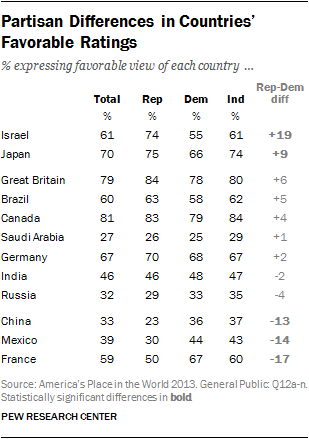 There are no significant partisan differences in views of many of these countries, including Great Britain, Brazil, Saudi Arabia and Russia. However, more Republicans than Democrats have a favorable impression of Israel (74% of Republicans vs. 55% of Democrats). 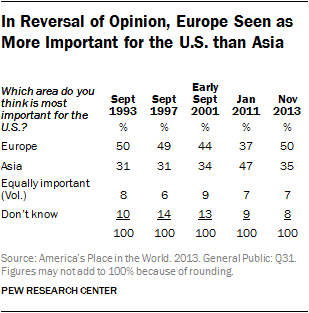 This is a shift from two years ago, when more viewed ties with Asia as most important, by 47% to 37%. In two surveys in the 1990s, Europe was viewed as more important for the U.S. than Asia.

Across most demographic and partisan groups, more see political, economic and military ties with Europe as more important than did so in January 2011. 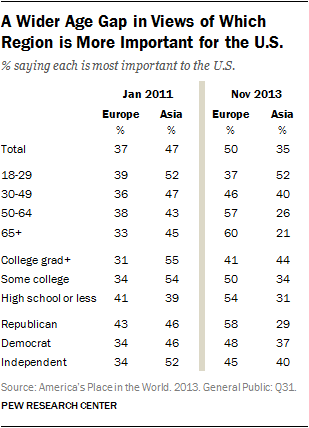 Older Americans, in particular, are now much more likely to say that Europe is more important to the U.S. than two years ago.