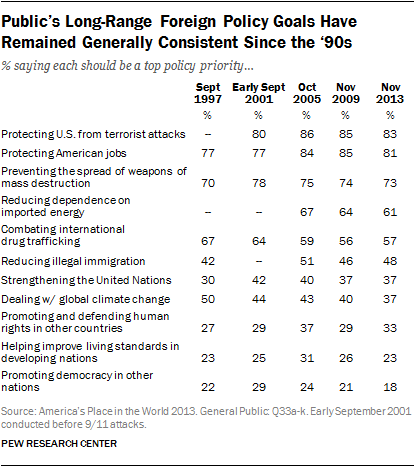 The long-range foreign policy priorities of the American public have remained largely consistent since the 1990s – a period covering three presidencies, two major wars and the worst terrorist attack in the nation’s history.

Fully 83% say that taking measures to protect against terrorist attacks should be a top priority of the United States. This is little changed from the most recent America’s Place in the World surveys in 2009 (85% top priority) and 2005 (86%).

Even in September 2001, before the 9/11 terrorist attacks, 80% rated protecting the nation from terrorism as top priority.

Protecting American jobs also continues to be one of the public’s leading policy goals. Currently, 81% rate protecting U.S. jobs as a top priority, which has remained stable since the 1990s. Nearly three-quarters of Americans (73%) say that preventing the spread of weapons of mass destruction should be a top long-range policy objective.

About six-in-ten (61%) say that reducing U.S. dependence on imported energy sources is a top priority, which is slightly lower than 2005 (67%). And (57%) say the same of combatting international drug trafficking; that is little changed from recent years, though 10 points lower than in the 1997 America’s Place in the World survey.

The goals rated lowest by the public are promoting human rights in other countries (33% top priority), helping improve the living standards in developing nations (23%) and promoting democracy in other nations (18%). These objectives have never been viewed as important by most Americans, though in the early September 2001 survey, 29% said promoting democracy abroad should be a top policy priority. 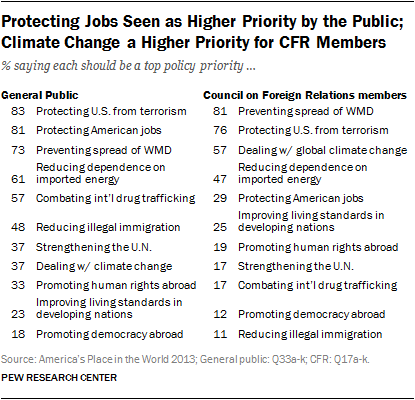 The long range policy goals of Council on Foreign Relations members are similar to the public’s in several respects. Large percentages of CFR members rate preventing the spread of weapons of mass destruction (81%) and protecting the U.S. from terrorism (76%) as top policy priorities.

And CFR members, like the public, view improving living standards in developing countries (25%), and the promotion of human rights (19%) and democracy (12%) as much lower policy priorities. 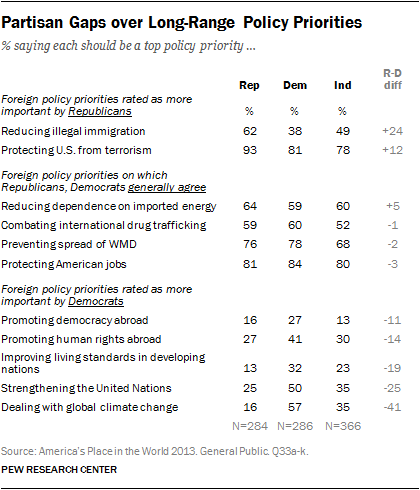 There continue to be wide partisan disagreements over the importance of a number of foreign policy priorities. More than three times as many Democrats (57%) as Republicans (16%) say that dealing with global climate change should be a top foreign policy priority. This reflects the deep partisan divide over whether there is solid evidence that the earth is warming.

And while goals such as strengthening the U.N., improving living standards in developing countries, and promoting human rights and democracy are not among Democrats’ leading priorities overall, more Democrats than Republicans view each as top policy goals. 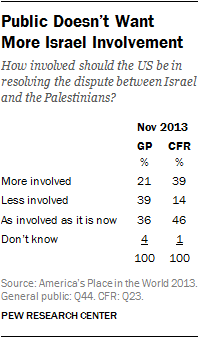 By comparison, 46% of CFR members say the U.S. should be as involved as it currently is, closely followed by 39% who would like the U.S. to be more involved; just 14% want less U.S. involvement in the Israeli-Palestinian conflict. 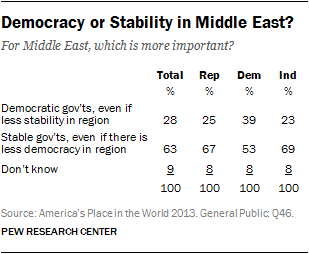 Next: Section 4: The Threat of Terrorism and Civil Liberties
← Prev Page
Page1Page2Page3You are reading page4Page5Page6Page7Page8Page9
Next Page →