Two-thirds of Americans (67%) say there is solid evidence that the earth has been getting warmer over the last few decades, a figure that has changed little in the past few years. While partisan differences over climate change remain substantial, Republicans face greater internal divisions over this issue than do Democrats. 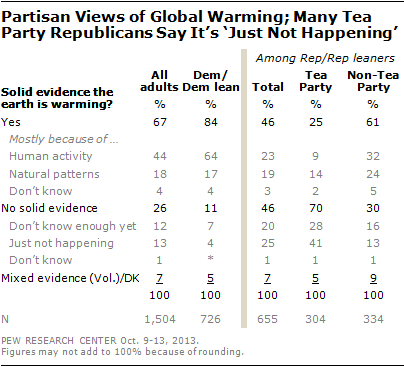 The national survey by the Pew Research Center, conducted Oct. 9-13 among 1,504 adults, finds that most people who see solid evidence of global warming – 44% of the public overall – say it is mostly caused by human activity, such as burning fossil fuels. Just 18% say it is mainly caused by natural patterns in the earth’s environment.

Among the 26% of the public who say there is no solid evidence of global warming, about as many say “it’s just not happening” (13%) as say “we just don’t know enough yet about whether the earth is getting warmer” (12%).

Democrats are far less divided over global warming than Republicans, although liberal Democrats are more likely than moderates and conservatives to say that global warming is mostly caused by human activity (75% vs. 58%) rather than by natural patterns.

Trends in Views on Global Warming 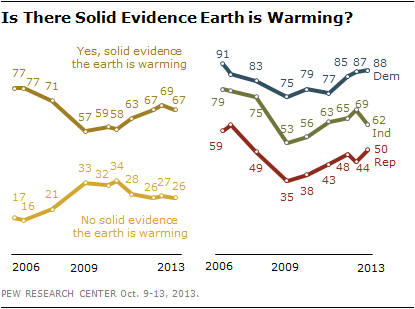 Overall, two-thirds (67%) of Americans say there is solid evidence that the earth has been getting warmer. These views have changed very little in the last few years.

Far more see solid evidence of global warming than did so between 2009 and early 2011. But when the Pew Research Center first asked this question in 2006, 77% said there was solid evidence that the average temperature on earth had been increasing.

Is Human Activity the Cause? 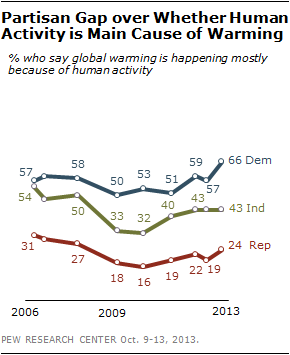 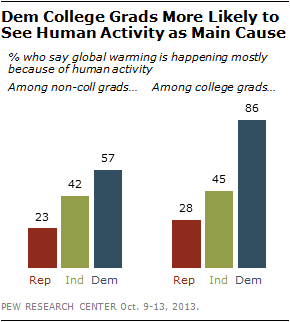 Two-thirds of Democrats (66%) now say that warming is mainly because of human activity, up nine points from earlier this year. Fewer independents (43%) and Republicans (24%) than Democrats say that human activity is the primary cause of global warming.

By contrast, similar percentages of Republican college graduates (28%) and those who do not have a college degree (23%) say that human activity is mostly responsible for global warming.

More Say Scientists Agree on Cause of Global Warming 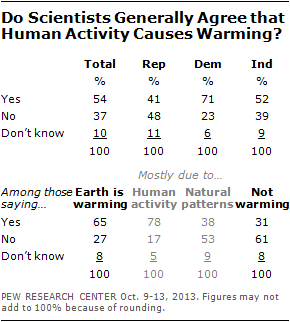 Most Democrats say there is scientific consensus on global warming (71%). Only 41% of Republicans say that scientists generally agree, while 48% say they do not. 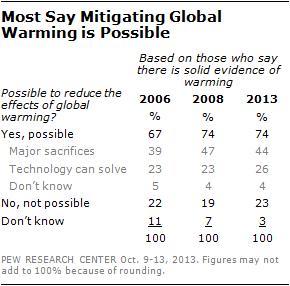 While there may be disagreement over whether global warming exists, most (74%) of those who say there is solid evidence of rising temperatures on earth believe it is possible to reduce the effects. Just 23% say it is not possible.

When asked if major sacrifices will be needed to reduce the impact of global warming, 44% say they will be needed, while 26% say that technology can solve the problem.

On both of these questions there has been little change in the last five years.