For the first time in surveys dating to 1974, more than half of the public (53%) says the United States plays a less important and powerful role as a world leader than it did a decade ago. 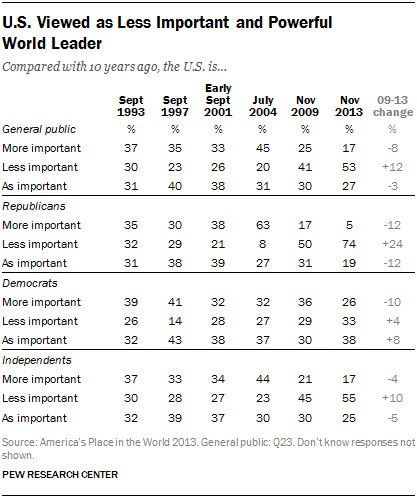 Just 17% say it plays a more important role, while 27% say it is about as important as it was in the past.

Members of the Council on Foreign Relations are also far more likely to see the U.S. as a less important and powerful world leader: 62% express this view, compared with 44% in 2009 and 25% in early September 2001, shortly before the 9/11 attacks.

Impressions of how the U.S. is perceived abroad improved soon after Barack Obama took office, but are now as negative as they were during the Bush administration. 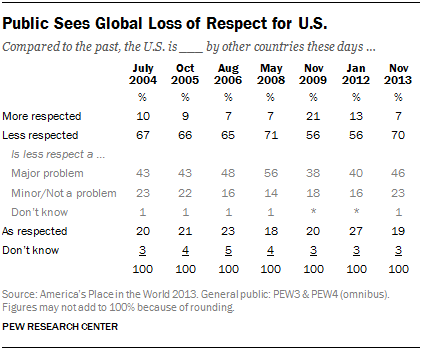 Most of those who say the United States is less respected than in the past – 46% of the public, overall – say this is a major problem. Just 23% of the public views the lack of respect as a minor problem or say it is not a problem. 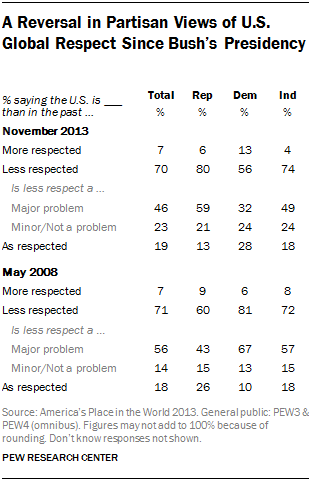 Republicans are now more likely to say the U.S. is less respected internationally – and to view this as a major problem – than during the Bush administration. Democrats, by contrast, are now less likely to see a loss of respect for the United States and to say it is a major problem than in 2008.

Consistent with past surveys, a large majority of Americans (72%) favor a shared leadership role for the United States. Far fewer say the U.S. should be the single world leader or play no leadership role (12% each). 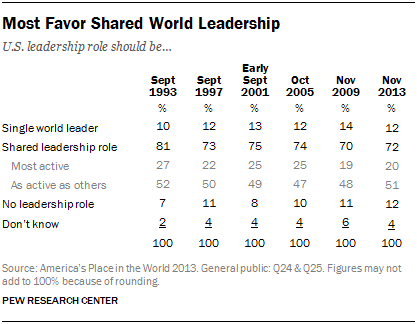 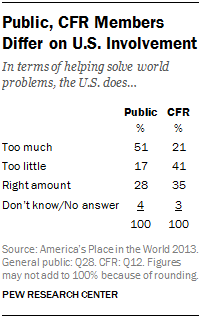 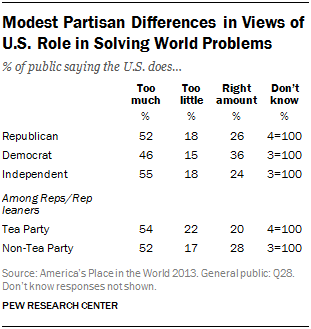 Democrats are more likely to say that the United States does the right amount to solve global problems (36% vs. 26% of Republicans and 24% of independents).

Similarly, 80% agree with the statement, “We should not think so much in international terms but concentrate more on our own national problems and building up our strength and prosperity here at home,” up slightly from 76% in 2011. The level of support for this statement, which has been tested since 1964, now rivals the previous high set in the early 1990s.

Views on global engagement do not vary much across party lines. Majorities or pluralities of Republicans (52%), Democrats (46%) and independents (55%) think the U.S. does too much to try to help solve world problems, and agree that the U.S. should mind its own business internationally (53%, 46% and 55%, respectively). And close to eight-in-ten among each group agree that the U.S. should concentrate more on our own national problems, rather than thinking so much in international terms (82% of Republicans, 76% of Democrats and 79% of independents).

Working with Allies and the United Nations

Nearly eight-in-ten Americans (77%) agree that “in deciding on its foreign policies, the U.S. should take into account the views of its major allies,” virtually unchanged from 79% in 2011 and 78% in 2009. And most (56%) disagree that “since the U.S. is the most powerful nation in the world, we should go our own way in international matters,” although more agree with the statement now (38%) than at any time in nearly half a century, with the exception of 2009, when 44% agreed that the U.S. should go its own way internationally. 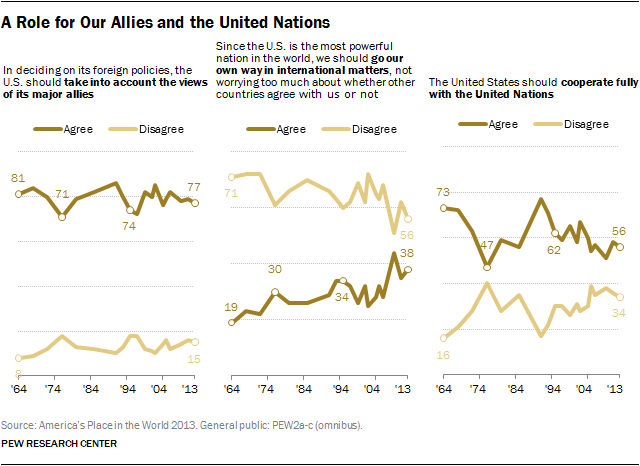 Most Favor Keeping U.S. as Only Superpower 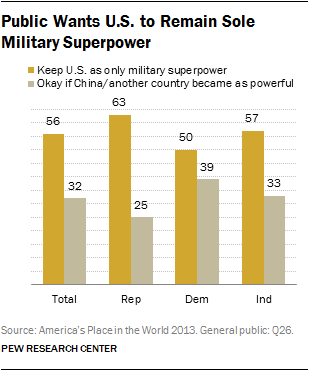 More than half of the public (56%) say U.S. policies should try to keep it so America is the only military superpower, while 32% say it would be acceptable if China, another country or the European Union became as militarily powerful as the United States. This view is virtually unchanged from 2009.

Republicans are especially inclined to say U.S. policies should ensure America’s position as the only military superpower. About six-in-ten (63%) say this is the case, compared with half of Democrats; 57% of independents also favor policies aimed at keeping the U.S. as the only superpower.

Next: Section 2: Views of Trade and the Global Economy
← Prev Page
Page1You are reading page2Page3Page4Page5Page6Page7Page8Page9
Next Page →