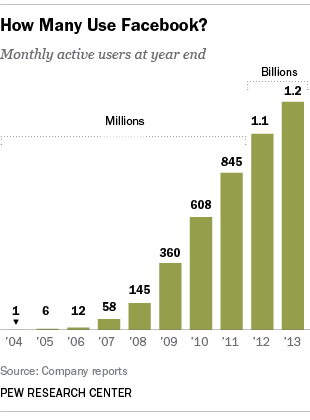 Ten years ago today, a little website called thefacebook.com was launched. Initially restricted to Harvard undergraduates, the site had 1 million users by the end of 2004. Today, Facebook (“the” was dropped in 2005) has more than 1.2 billion “monthly active users” around the world. As of December, the company says 757 million people used the social-networking service on any given day.

These days, Facebook’s strongest growth is coming from overseas. The monthly user base (defined as those who accessed the site at least once in the previous 30 days) grew just 4.1% in the U.S. and Canada last year, according to the company’s annual 10-K report. In Europe, it grew by 8%; in Asia, 23.5% (including Australia and New Zealand); and in the rest of the world, it grew by 23.7%. American and Canadian users, in fact, now make up less than a sixth of Facebook’s total user base. 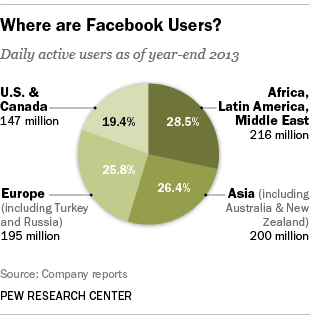 However, Americans and Canadians are the service’s most active users. According to company data, on any given day in December, 73% of Facebook’s U.S. and Canadian users visited the site, used its Messenger app or or shared content with Facebook friends via an affiliated third party. That compares with 69% of European users, 54% of Asian users and 57% of users elsewhere in the world. Engagement levels have risen steadily over time, and making sure they continue to do so is key to Facebook’s future. As the company said in its report, “To the extent our active user growth rate slows, we will become increasingly dependent on our ability to maintain or increase levels of user engagement and monetization in order to drive revenue growth.”

The rapid rise in users engaging with Facebook via smartphones, tablets and other mobile devices poses another challenge. In December, the company reported, 945 million monthly active users worldwide accessed Facebook via a mobile application or a mobile version of the site, up 39% from December 2012. Of those 945 million, nearly a third (296 million) were mobile-only users.