American teens have long been the country’s most-wired (and increasingly wireless) age group, with 95% saying they go online. But contrary to the stereotype of hyper-connected teens, they say some things are better done in person. 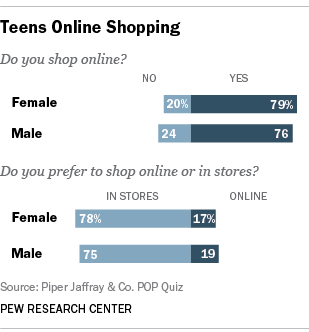 The latest evidence for that comes from Minneapolis-based investment bank Piper Jaffray. Earlier this spring, the firm, which regularly surveys teens’ spending patterns, brand preferences, media and entertainment habits and other information of interest to investors, asked 4,800 teens nationwide whether they shopped online; not surprisingly, more than three-quarters said they did. But when Piper asked teens whether they preferred shopping online or in stores, 78% of girls and 75% of boys said they’d rather go to actual stores.

And despite growing interest in video-on-demand, digital streaming and other ways to watch movies at home, 61% of teens told Piper they still preferred watching movies in actual theaters (though they were divided on whether 2-D, 3-D or Imax was the best format).

Social scientists, stock analysts and other researchers are keenly interested in how teens behave online, not just because of their raw purchasing power but because as Mary Madden, another senior researcher at Pew Internet, said in a recent report, “the patterns of their technology use often signal future changes in the adult population.”