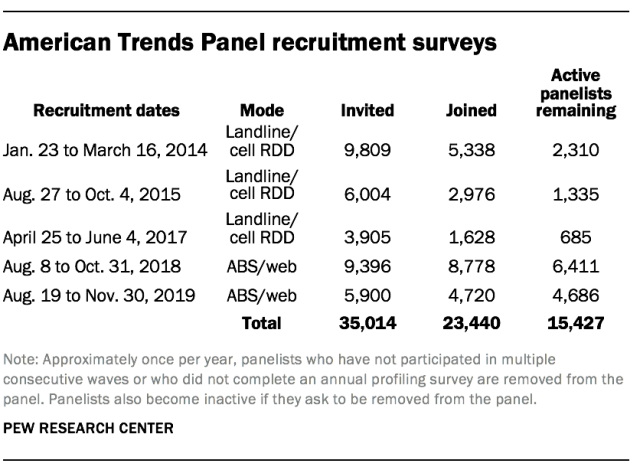 The U.S. Postal Service’s Delivery Sequence File has been estimated to cover as much as 98% of the population, although some studies suggest that the coverage could be in the low 90% range.4 The American Trends Panel never uses breakout routers or chains that direct respondents to additional surveys.

To create upper-, middle- and lower-income tiers, respondents’ 2018 family incomes were adjusted for differences in purchasing power by geographic region and for household size. “Middle-income” adults live in families with annual incomes that are two-thirds to double the median family income in the panel (after incomes have been adjusted for the local cost of living and for household size). The middle-income range for the American Trends Panel is about $37,500 to $112,600 annually for a three-person household. Lower-income families have incomes less than roughly $37,500, and upper-income families have incomes greater than roughly $112,600.

Based on these adjustments, among respondents who provided their income and household size, 32% are lower income, 45% are middle income and 23% fall into the upper-income tier.