The analysis in this report comes from two sources: 1) Pew Research Center analysis of the Census Bureau’s American Community Survey (IPUMS) and the 1990 and 2000 decennial censuses and 2) a nationally representative survey conducted from July 11 to Aug. 10, 2017, among a sample of 4,914 adults 18 years of age or older. The margin of error for the full sample is plus or minus 2.7 percentage points.

KnowledgePanel continually recruits new panel members throughout the year to offset panel attrition as people leave the panel. All active members of the GfK panel were eligible for inclusion in this study. 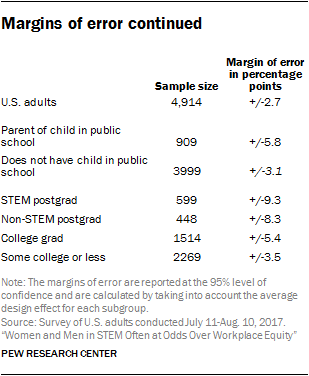 All respondents were asked to verify their current employment status. Updated occupation information was collected for all employed adults who indicated that their main job had changed since the time of completing their profile survey.42 Most respondents who said they worked in a STEM occupation were also asked an open-end question to describe their occupation in more detail. These responses were used for final classification as employed in a STEM or non-STEM job where they were available.43

STEM occupations included the following job categories: computer and mathematical; architecture and engineering; life and physical sciences; medical doctors; other health care practitioners; health care technologists and technicians; and teachers (both K-12 and postsecondary) who specialize in a STEM subject.44Healthcare support occupations and all other occupational categories were classified as non-STEM jobs.

Note that since the survey was conducted in only English and Spanish, the sample of Asians working in STEM jobs are those with proficiency in English. There are not enough Asians working in non-STEM jobs for separate analysis in this survey.

The data were weighted in a multistep process that begins with a base weight that accounts for differences in probability of selection into the study. Respondents were divided into four mutually exclusive subgroups 1) STEM workers, excluding STEM teachers 2) non-STEM workers, excluding non-STEM teachers 3) Teachers, both STEM and non-STEM 4) Non-workers. Each of these groups was separately weighted using an iterative technique to match population benchmarks. Next, the weighting combined all workers and aligned the combined group to population benchmarks for all workers.45 In a final step, workers (both STEM and non-STEM) were combined with non-workers, and the weights were further adjusted so that each group’s relative proportions and demographic profile matched estimates for all U.S. adults. At each stage, the resulting weights were trimmed and scaled to the number of completed surveys.

Sampling errors and tests of statistical significance take into account the effect of weighting at each of these stages.

The tables show the unweighted sample sizes and the error attributable to sampling that would be expected at the 95% confidence level.

Women and Men in STEM Often at Odds Over Workplace Equity 1. Diversity in the STEM workforce varies widely across jobs 2. Most Americans believe STEM jobs pay better, but few see them as offering more flexibility for family time 3. Women in STEM see more gender disparities at work, especially those in computer jobs, majority-male workplaces 4. Blacks in STEM jobs are especially concerned about diversity and discrimination in the workplace 5. Most Americans evaluate STEM education as middling compared with other developed nations 6. Many Americans say they liked math and science in school, thought about a STEM career Acknowledgments
Methodology
Sample DesignWeightingVariance estimation
Appendix: Detailed tables and charts