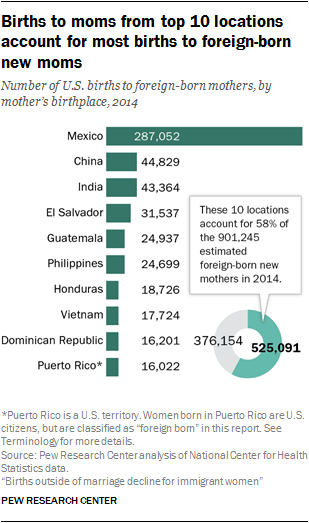 Women hailing from just nine countries and one U.S. territory, all of which are located in Latin America and Asia, accounted for more than half (58%) of all births to immigrant mothers in the U.S. in 2014. 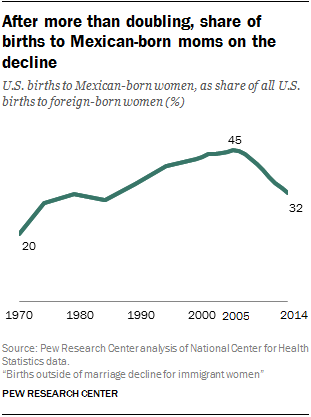 Mexico remains by far the dominant country of birth for new foreign-born mothers; about a third (32%) of all babies born to foreign-born mothers are to those who were born in Mexico.26 To put that in perspective, the 287,000 births to Mexican-born women in 2014 outnumbered all births to women from Asia, Europe, North America and Oceania combined. China and India are the next most common origin countries – babies with mothers from these countries each account for 5% of births to the foreign born. Babies born to mothers originally from El Salvador, Guatemala and the Philippines account for 3% each; and those from Honduras, Vietnam, the Dominican Republic and Puerto Rico each account for about 2% of births to foreign-born mothers.

A likely factor driving this recent decline is the dramatic impact that the Great Recession seemed to have on the fertility of Mexican-born women in the U.S. – their birth rates plummeted by 23% from 2007 to 2010. In comparison the overall U.S. birth rate dropped by 8% during that time, and the birth rate among all U.S. immigrants dropped by 14%. Meanwhile, the share of Mexican-born women of childbearing age in the U.S. dropped slightly, as overall Mexican immigration to the U.S. receded. 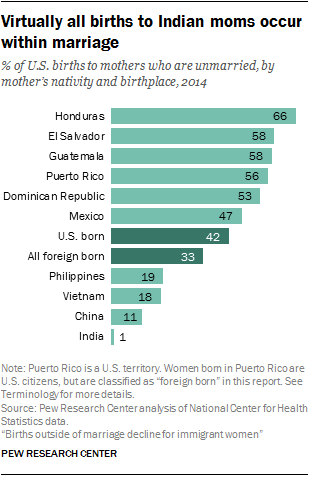 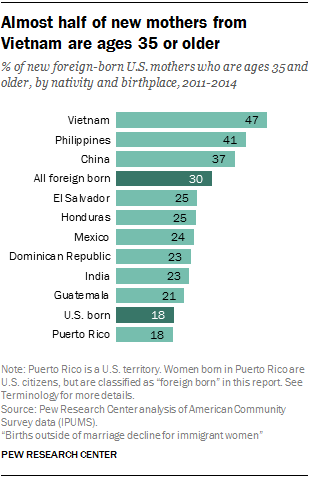 Foreign-born women who gave birth within the preceding 12 months are older, on average, than their U.S.-born counterparts – some 30% are ages 35 or older, compared with 18% among the U.S. born. Foreign-born new mothers originally from Vietnam (47%), the Philippines (41%) and China (37%) are particularly likely to be in this age range. Some 23% of new mothers from India are ages 35 or older – far below the shares found among new mothers from the other major Asian sending countries.

Mothers from major Latin American sending countries are less likely than foreign-born moms overall to be ages 35 or older. About one-fourth of new mothers from El Salvador (25%), Honduras (25%), Mexico (24%) and the Dominican Republic (23%) are at least 35 years old. Some 21% of new mothers from Guatemala are in this age range, as are 18% of those from Puerto Rico.

Mothers from Puerto Rico are about as likely as U.S.-born new mothers to be teenagers (7% vs. 6%). Teen mothers are less prevalent among those from other countries. The share reaches 4% among mothers originally from Mexico and the Dominican Republic, and 3% for mothers from El Salvador. Just 2% of those from Honduras and Guatemala are teen moms, and among new mothers from the remaining countries, the share is 1% or less.

New moms from India are, by far, the most likely to have bachelor’s degree and to be financially well-off

Among foreign-born women who gave birth in the preceding 12 months, educational attainment parallels financial well-being. New moms from India stand out on both measures – almost nine-in-ten (87%) have a bachelor’s degree, and their annual median incomes top $100,000. In contrast, new mothers from Honduras and Guatemala stand out as well – at least half lack a high school diploma, and about half are living in poverty. 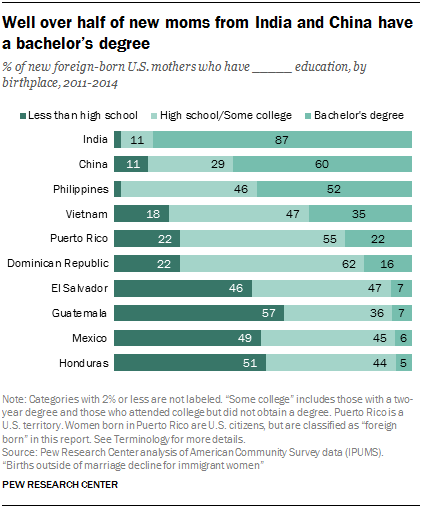 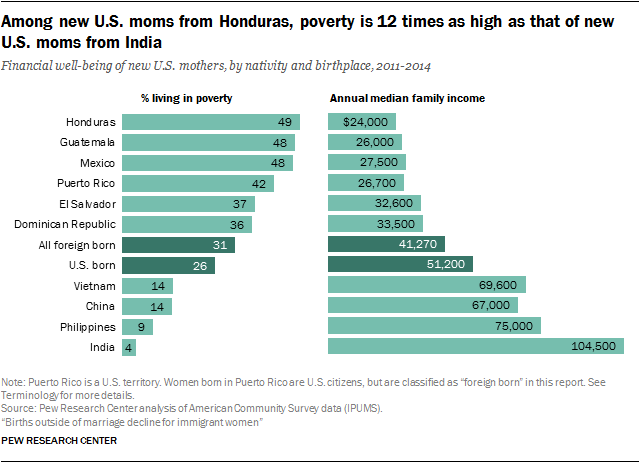 New mothers from the remaining countries, all located in Latin America, are less well-off than new U.S.-born mothers and new foreign-born mothers overall. Those from the Dominican Republic have incomes of about $33,500 a year, and those from El Salvador have incomes of about $32,600. Some 36% of those from the Dominican Republic are living in poverty, as are 37% of those from El Salvador. Incomes dip below $30,000 among new mothers from the remaining locations, and poverty is relatively high. Some 42% of new moms from Puerto Rico are living in poverty, while about half of those from Mexico (48%), Guatemala (48%) and Honduras (49%) are.

About four-in-ten new moms from Guatemala are English-proficient 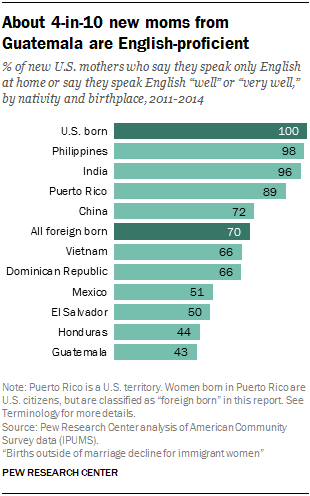 Rates of proficiency decline substantially for new mothers from the remaining countries of birth. The share is 72% for those from China, and two-thirds (66%) of new mothers from Vietnam and the Dominican Republic speak English at least “well.” About half of new moms from Mexico (51%) and El Salvador (50%) are English-proficient, as are 44% of those from Honduras and 42% of those from Guatemala.