Births to unmarried mothers have been more common among the U.S. born than the foreign born for at least 30 years, but the gap between these two groups has grown markedly in the past decade, from 2004 to 2014.

In 1984, the first year for which data are available by mother’s nativity and marital status, there was only a 2 percentage point difference between the share of babies born to unmarried foreign-born women (19%) and the share to unmarried U.S.-born women (21%), according to data from the National Center for Health Statistics. 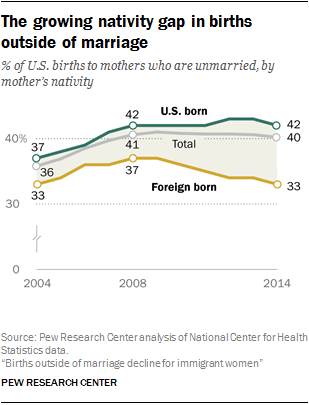 Since 2000, the share of births outside of marriage rose then leveled off for U.S.-born women. In contrast, this share has been on the decline for foreign-born mothers since peaking in 2008. In 2014, 33% of births to foreign-born moms occurred outside marriage (the lowest level since 2004), compared with 42% among U.S.-born women. The relatively low share of babies born to unmarried mothers among the foreign born has helped to suppress the overall share of these births in the U.S., which stood at 40% in 2014.16

These patterns largely mirror nativity differences in the marital status of all women of childbearing age. Foreign-born women ages 15 to 44 are much more likely to be married than their U.S.-born counterparts, 55% vs. 34%, according to ACS data. 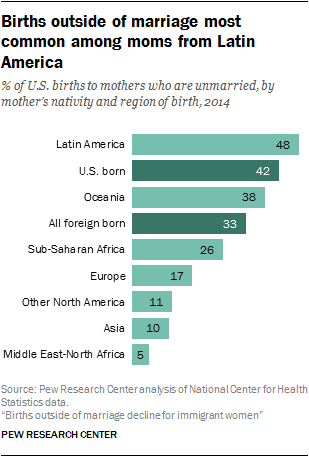 The recent decline in the share of babies born outside of marriage among the foreign born is driven in part by the dramatic decline in fertility for unmarried immigrant women. The birth rate for these women has declined by one-third since 2008, from 90.0 births per 1,000 women to 60.4 in 2014. In comparison, the birth rate for unmarried U.S.-born women during that same time dropped by about 9%, to 37.4. Among married women, birth rates dropped 10% for the foreign born and rose 5% for the U.S. born. 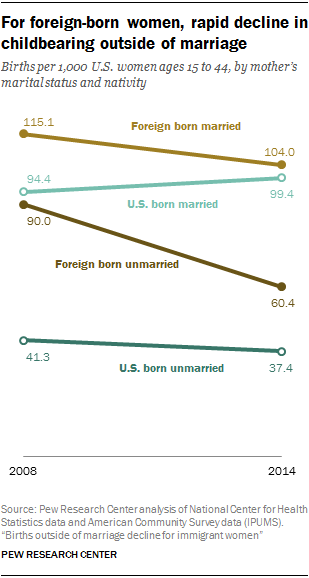 The recent downturn in births to unmarried foreign-born women is also due, in part, to the changing origins of foreign-born mothers in the U.S. In just six years, the share of births to mothers from Latin America – who are more likely than foreign-born mothers from any other region to be unmarried – dropped by 10 percentage points, from 64% in 2008 to 54% in 2014, according to data from the National Center for Health Statistics. At the same time, the share of new immigrant mothers from Asia – a group that is far less likely to be unmarried – rose by a similar amount.

Changes in the racial and ethnic composition of U.S.-born new moms have helped to sustain the relatively high share of births outside of marriage for that group. Since 2008, the share of U.S.-born new mothers who are white – and more likely to have births within marriage – has declined by 3 percentage points, while the share who are Hispanic – and more likely to have births outside of marriage – has risen by a similar amount.

The gap in births outside of marriage between U.S.-born and foreign-born women is a consequence not only of recent compositional changes, but also of enduring demographic differences. For instance, the share of births to teenagers has consistently been higher among the U.S. born than the foreign born. Since births outside of marriage are more common for teens than older women, this contributes to the nativity gap in this measure. And at the other end of the age spectrum, new mothers ages 35 and older are more common among the foreign born than the native born, and these women are less likely to give birth outside of marriage.

Next: 3. Foreign-born moms have a different demographic profile than U.S.-born moms, and among the foreign born there are sharp differences tied to region of birth
← Prev Page
Page1Page2You are reading page3Page4Page5Page6Page7
Next Page →

Hispanic women no longer account for the majority of immigrant births in the U.S.
Theyu2019re Waiting Longer, but U.S. Women Today More Likely to Have Children Than a Decade Ago
Record Share of New Mothers are College Educated
Childlessness Up Among All Women; Down Among Women with Advanced Degrees