Analyses in this report are primarily based on two sources: vital statistics data regarding births in the U.S., available from the National Center for Health Statistics (NCHS), and data regarding women ages 15 to 49 who gave birth in the U.S. in the preceding 12 months, available from the U.S. Census Bureau’s American Community Survey (ACS). Data from the decennial census and the American Community Survey are also used to estimate characteristics of all women of childbearing age.

The NCHS data regarding mother’s nativity extend back to 1970 and reflect information extracted from completed birth certificates for live births, which include the mother’s characteristics at the time of the birth. The bulk of these tabulations are based on all births occurring in the 50 states and the District of Columbia within a calendar year. The exception is for rate calculations, which use NCHS data only for births to women who report that they are residents of the U.S. It is necessary to add this constraint to rate calculations, so that the NCHS data will more closely match up with the ACS and census data used for the denominator.27

The ACS, which is an annual, nationally representative survey, began collecting data on the entire residential population of the U.S. in 2006. It includes a question identifying women who gave birth in the preceding 12 months, which is used to identify new mothers for this analysis. Most ACS-based analyses in this report use a file that combines 2011, 2012, 2013 and 2014 data, in order to produce sample sizes big enough to allow for analyses by nativity and location of birth for foreign-born recent mothers. However, ACS-based analyses focusing on change over time use single-year files.

While analyses suggest that the ACS and NCHS produce generally similar results in terms of mother’s nativity and marital status, there are some additional differences between the two data sources worth noting:

Information regarding the composition of the female population of childbearing age (15 to 44) is derived from the decennial census for 1970, 1980, 1990 and 2000, and from the American Community Survey for all subsequent years.

All ACS and decennial census data were obtained from IPUMS-USA, University of Minnesota, ipums.org.

The measure of birth rate used in this report is the general fertility rate (GFR), which is the number of births divided by the number of women of childbearing age in a given year. For all birth rate measurements in this report, the denominator includes a count of women ages 15 to 44, derived from the decennial census and ACS.28 For birth rates based on marital status, the small share of women who are classified as “separated” in census and American Community Survey data are grouped with unmarried mothers.29 The birth rate numerators vary somewhat: overall rates by nativity and rates by nativity and marital status use NCHS data regarding births to resident women in a given year.30 NCHS data are necessary for these trend analyses, since they are the only source of birth data that extends back several decades. The numerators for other rates are calculated based on all women ages 15 to 49 who had a birth in the prior year, according to ACS data.

Mexico is included in the Latin America region. China includes Macau, but not Taiwan or Hong Kong. In the 2014 National Center for Health Statistics data, mother’s country of birth could not be determined in 5% of the cases. 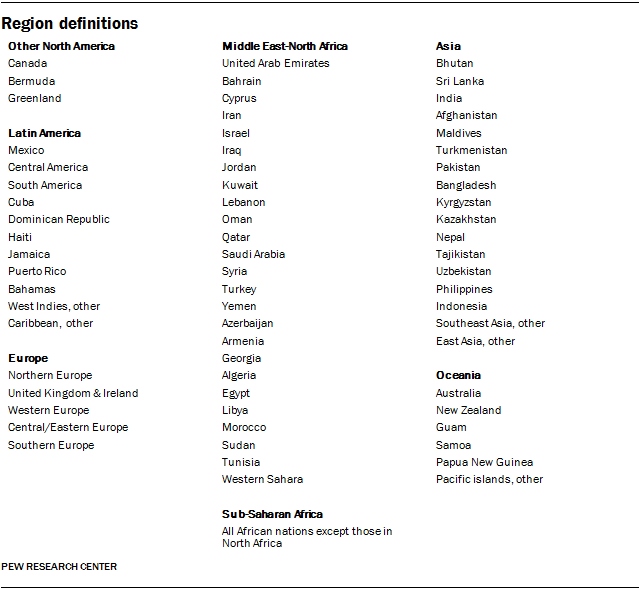 Births Outside of Marriage Decline for Immigrant Women 1. Growth in annual U.S. births since 1970 driven entirely by immigrant moms 2. Births outside of marriage on the decline for immigrant women 3. Foreign-born moms have a different demographic profile than U.S.-born moms, and among the foreign born there are sharp differences tied to region of birth 4. Among foreign-born new moms from top sending locations, big differences in demographic characteristics Acknowledgments
Methodology
DatasetsBirth ratesDefinitions