The census data point to a slowly developing but large shift in the roles, responsibilities and focuses of young adults that has led to significant changes in living arrangements. Many groups of young adults have already crossed a tipping point in which they are less likely to be pursuing committed relationships than to be living in the home of their parent(s).

For example, young men are now more likely to be living with mom and/or dad (35%) than to be living with a spouse or partner in their own household (28%). The year that the young adult males “crossed over” was 2009.

Young women have not reached the tipping point yet. In 2014, 35% of young women were living with a spouse or unmarried partner while 29% lived in the home of their parent(s).

Trends in living arrangements for specific groups of young adults indicate that the crossover is being driven by the experiences of more economically disadvantaged young adults, specifically, less-educated young adults and some racial and ethnic minorities.

By 1980 it was already apparent that black young adults were more likely to live at home (30%) than to be living with a spouse or an unmarried partner in their own residence (29%). The crossover point for American Indian young adults occurred in 2007. Hispanic young adults reached the tipping point in 2011 and by 2014 36% lived at home and 30% lived with a spouse or unmarried partner in their own household. As of 2014, white and Asian young adults remain more likely to be married or cohabiting than living with their parent. 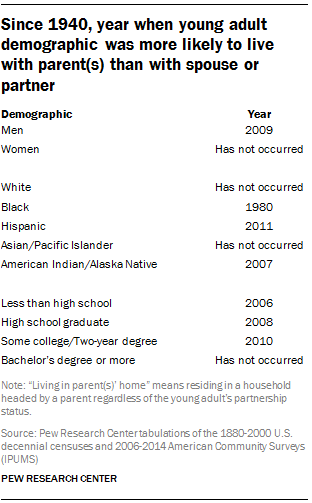 The movement away from living with a spouse or significant other reflects more than simply the well-documented retreat from marriage. 14 It partly reflects the large increase in parental living arrangements that has occurred among young adults since 1960. It also reflects the fact that, in terms of prevalence, cohabitation has not become a substitute for marriage. Young adults are not simply less likely to be married; they are forgoing partners altogether, whether spouses or cohabiting partners. In 1960 more than 60% of young adults were married or cohabiting and residing in their own household. In 2014, only 32% of young adults were living with a spouse or partner. 15

Since 1960 there have been significant changes in the demographic characteristics of young adults. Young adults are less white, better-educated and less likely to be married.

In general, non-Hispanic white young adults have traditionally been less likely than their black and Hispanic counterparts to live in their parental home. But the growing share of non-whites in the young adult population does not explain the increased prevalence of living at home. The share of white young adults living with their parent(s) increased from 19% in 1960 to 30% in 2014, nearly as sizable an increase as for all young adults. Even in the absence of the racial and ethnic diversification that has occurred, a much greater share of young adults would now be living with mom and/or dad.

Young adults today are slightly younger than young adults in 1960, in that a smaller share of them are in the 30- to 34-year-old age group. But this shift in age composition has only a very modest impact on the trend in living with parents.

Better-educated young adults are less likely to live with their parents, so the improvements in educational attainment tend to decrease living at home.

This does not imply, however, that the shift away from marriage has “caused” the increase in living with parents, because other social and economic factors may have reduced the attractiveness of marriage for young adults and, at the same time, made living independently of parents more difficult.