The rise in the share of young adults living with their parents since 1960 has occurred for both men and women and across all major racial and ethnic groups.

Generally, throughout the past 135 years young men have been more likely than young women to be living in the home of their parent(s). For both genders living with parent(s) was at its nadir around 1960. Since then the gap between men and women has narrowed somewhat. 11 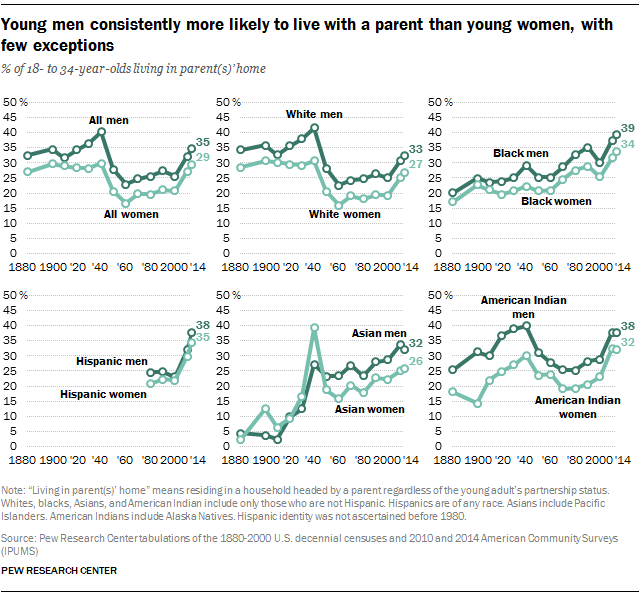 The gender gap in young adult living arrangements cuts across racial and ethnic groups. Among whites, blacks, Hispanics, Asians and American Indians, men have consistently been more likely than women to live in their parents’ home in early adulthood. 12

The share of young adults living with their parents peaked for the group as a whole in 1940 at 35%. However, for some demographic groups, including those whose distinct measurement began later, it is 2014 that represented a high-water mark in this type of living arrangement.

Along racial lines the Census Bureau has collected reasonably consistent information on racial identity since 1880. A record high 36% of black 18- to 34-year-olds lived in the home of their parent(s) in 2014. In 2014 about 35% of American Indian young adults lived at home. This was a slight decline from the record high of 38% of these young adults living with their parent(s) in 2012.

The Census Bureau did not begin to uniformly collect information on Hispanic origin until 1980. The share of Hispanic young adults living with their parent(s) in 2014 (36%) was the highest in recorded history.

Among young adults without a high school diploma, the share living at home in 2014 was 40% – another record high since the Census Bureau began collecting data on educational attainment in 1940.

Since 1990 the general pattern has been that better-educated young adults are less likely to live with their parent(s). Young adults with at least a bachelor’s degree have consistently been the educational group least likely to do so.

Geographically, throughout much of the southern and Pacific United States, the share of younger adults living with a parent reached record high levels in 2014. On the basis of the nine Census Bureau geographic divisions, young adults in the South Atlantic, West South Central and Pacific states are living with their parent(s) at historically unprecedented levels. 13 The states in the East South Central region were the exception to the general pattern of Southern states having record levels of young adults living with their parent(s). 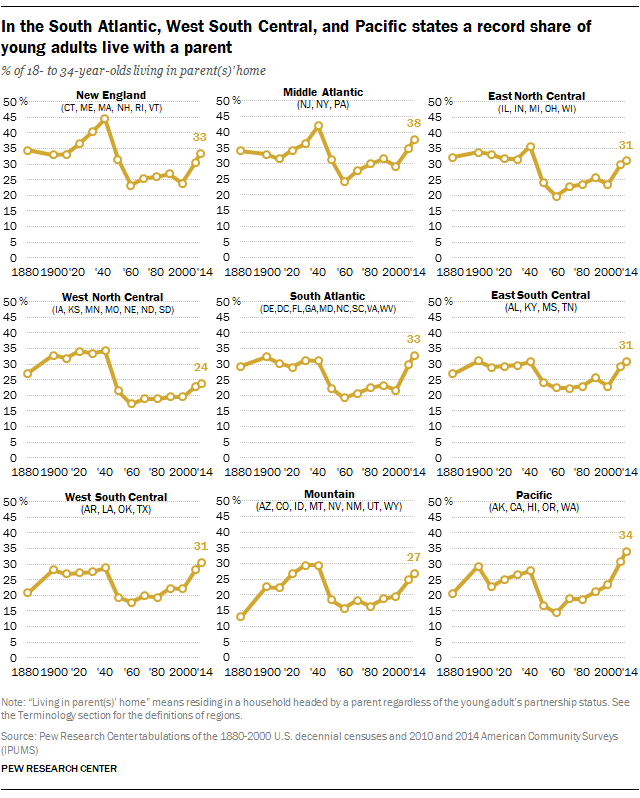