This section examines the labor market fortunes of young adult men and women and the role the job market may play in understanding the trends in living with parents. 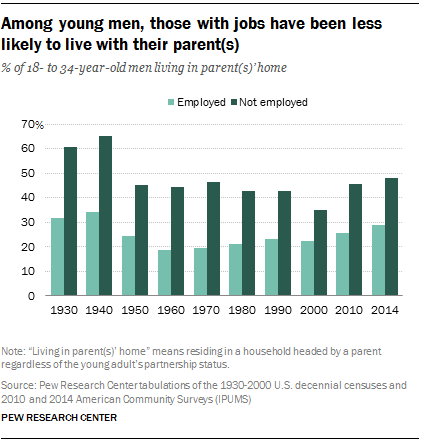 The decennial census has consistently inquired about employment status since 1930, and for 18- to 34-year-old men there is a clear-cut pattern between their labor market fortunes and their likelihood of living at home. Employed young men are much less likely to live at home than young men without jobs.

Wages and salaries provide a more fine-grained measure of labor market success. The decennial census has collected wage and salary information since 1940 and, again, consistently for young men wages are negatively associated with living in the home of their parent(s). 16 The more a young man earns the less likely he is to live at home. 17 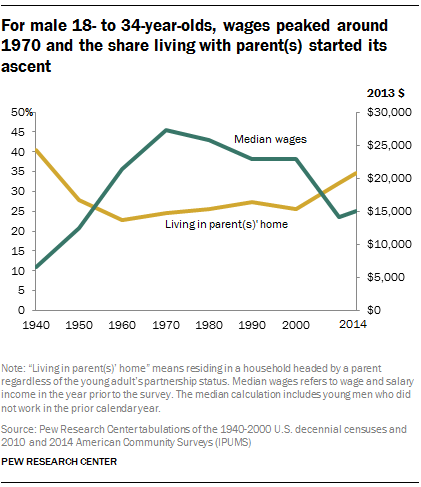 The decades immediately after World War II have been described as the “golden age of wage labor for young men.” The share of young men with jobs peaked around the 1960 Census. The median yearly wages of young men rose steadily from 1940 ($6,600) until 1970 ($27,300). This enabled young men to marry earlier in life, stoked a marriage boom 18 and resulted in record low rates of young men living with their parents.

The fortunes of young men in the U.S. labor market have been trending downward since the 1960s. 19 In the wake of the Great Recession, only 67% of 18- to 34-year-old men were employed in 2011, a shadow of the 84% employed in 1960. The typical wages of young men were about $15,000 in 2014. The fall in young men’s employment and earnings since 1970 has likely made living independently more difficult for them, which in turn helps account for the rise in the share of young adults living with their parent(s). 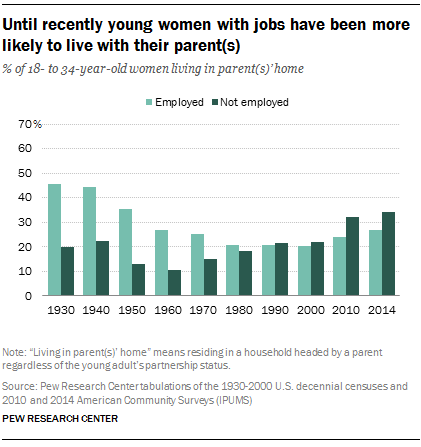 When it comes to young women, trends in the labor market do not provide a ready explanation for the increase in living at home.

So the period since 1960 has been a period of rising paid employment and wages for young women, while a greater share of them are living at home.