The post-recession uptick in the population living in multi-generational arrangements has been particularly pronounced among young adults ages 25 to 34. In 2012, 23.6% of this age group lived in a multi-generational household, up from 21.6% in 2010. 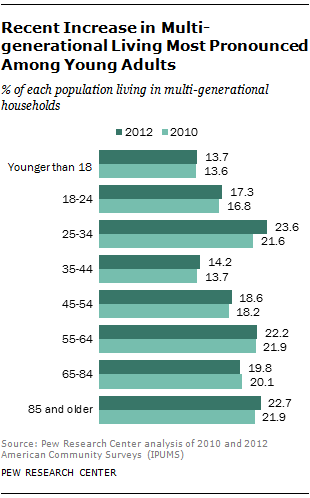 Historically, the oldest Americans, those ages 85 and older, have been the most likely to live with multiple generations of family. However, in 2011 young adults ages 25 to 34 eclipsed those ages 85 and older as the group most likely to live in a multi-generational household. By 2012, 22.7% of the oldest Americans resided with multiple generations of kin, compared with 23.6% of young adults ages 25 to 34.

Some of the long-run increase in multi-generational living arrangements among young adults is due to their greater difficulties in establishing economic self-sufficiency as a result of declining labor market opportunities (Sironi and Furstenberg, 2012; Kahn, et. al., 2013). This is particularly true for young men without a four-year college education. For example, real hourly wages declined between 5% and 25% for men with less than a bachelor’s degree between 1979 and 2010, with the steepest declines among the youngest and least-educated men. By contrast, women with at least a high school education have experienced wage gains (Autor and Wasserman, 2013).

There have also been well-known changes in the social behaviors of young adults. This generation of young adults is marrying at later ages, so the pool of unmarried young adults—a group much more likely to live with their parents—is expanding. According to the Census Bureau, the median age at first marriage in 2013 is estimated to be 29 for men and almost 27 for women. In 1980, the median age of first marriage for both men and women was between four and five years younger. 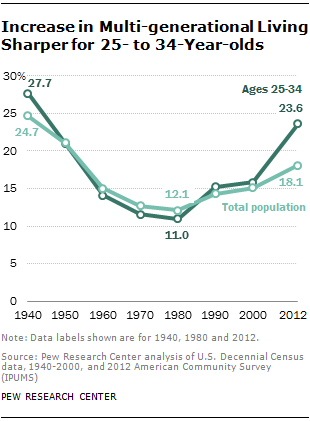 The fact that young adults were once less likely than the nation’s seniors to live in multi-generational households but are now more likely to do so may reflect, in part, the changing economic fortunes of the nation’s young compared with older age groups. Poverty rates among the nation’s 65 and older population have markedly fallen over the past 50 years. In contrast, poverty has risen among young adults since the 1980s. While the likelihood of residing in a multi-generational household may not be a direct measure of economic well-being (or lack thereof), there is evidence that the changing patterns of multi-generational living parallel “the general trends toward the greater economic security of older adults and the increasing financial strain experienced by younger adults.” (Kahn, et. al., 2013)

In general, women are more likely than men to live in a multi-generational household. In 2012, 19% of women lived in such arrangements, compared with 17% of men. This partly reflects the likelihood that women, on average, live longer than men. In addition, women ages 65 and older are much less likely than similarly aged men to be married, and, just as with young adults, older adults who are unmarried are more likely to live in multi-generational households.

The main exception to this general gender pattern in multi-generational living arrangements occurs among young adults age 25 to 34, where young men (26%) are significantly more likely than young women (21%) to live with multiple generations of family. 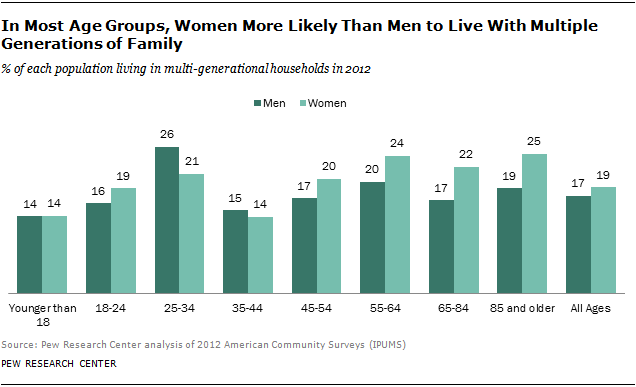 Who Is the Head of the Household?

In census data, each household is counted as being headed by one person, generally the one who owns or rents the house or apartment. Since the household head might be construed as the household member with the greatest financial resources and most financial independence, there is considerable interest in determining who is living with whom in a multi-generational household. For instance, in a two-generation multi-generational family household, are the parent and the adult child (age 25 or older) living in the parent’s home or the adult child’s home? That is, which generation is the head of the household? 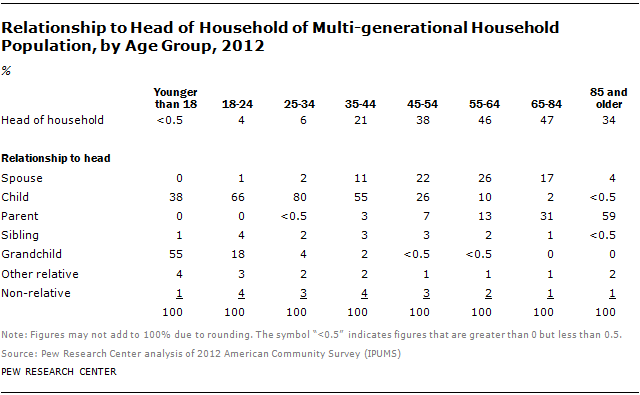 By and large, the patterns of relationship to the head of the household have not markedly changed from 1980 to 2012. In 2012, most young adults living in multi-generational households were the child of the household head and hence living in their parent(s)’ house. Among those ages 25 to 34, 80% fell into this category in 2012. As adults age they are less likely to be living in a parent’s household and more likely to be either the head, the spouse of the head or living in a household headed by their adult child. Among 65- to 84-year-olds living with multiple generations of family, nearly two-thirds (64%) were the head or spouse of the head. It is only among the nation’s oldest Americans in multi-generational households in which a majority (59%) are the parent of the head and hence living in their adult child’s abode.

Multi-generational Living Increased Among Most Racial and Ethnic Groups 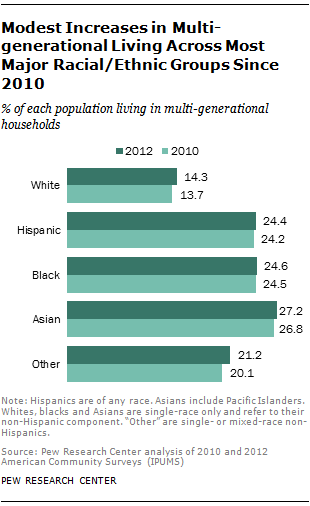 The share of people living in multi-generational households has increased across most racial and ethnic groups in the post-recession period. 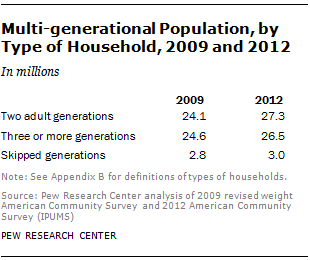 Next: References
← Prev Page
Page1Page2You are reading page3Page4Page5Page6
Next Page →