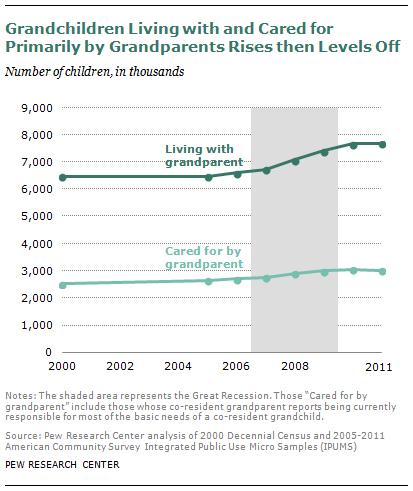 In 2011, 7.7 million children in the U.S.–one-in-ten—were living with a grandparent, and approximately 3 million of these children were also being cared for primarily by that grandparent.1

Both of these numbers rose rapidly after the onset of the recession in 2007 and have stabilized since 2009, when the recession officially ended, according to a new Pew Research Center analysis of U.S. Census Bureau data.

In most cases (71%), grandchildren living with a grandparent are actually living in the grandparent’s household. This share rises to 94% among those children who are also being cared for primarily by a grandparent. 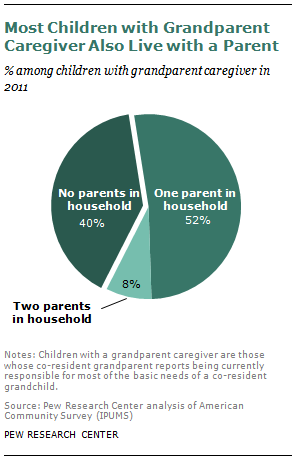 Many of the parents in these households have characteristics suggestive of the need for family assistance. For example, 44% had a baby as a teen, and 12% have a disability. One-fifth (21%) are unemployed, 29% lack a high school diploma and 22% are currently enrolled in school.

The sharp increase in the number of grandchildren living with their grandparents, and in some cases being cared for by them, during the recession mirrors other trends in family and household structure that have emerged since 2007 as apparent strategies to gird against financial hardship.

A recent Pew Research Center analysis identifies recent increases in the share of young adults living in their parents’ homes, due in part to declines in employment, increases in college enrollment and postponement of marriage. Some of these young adults are avoiding moving away from home altogether, and some are “boomerang kids” who have returned to their childhood homes during the economic hard times of recent years. Pew Research has also documented general increases in multi-generational households and declines in fertility that accelerated after the onset of the recession. Other researchers have pointed to increases in cohabitation that have occurred in recent years as well.

Post-recession analyses are not yet available for all of these trends, but just as the number of grandchildren living with and being cared for primarily by grandparents leveled off after rising rapidly during the recession, fertility rate declines are also stabilizing, after plummeting. Conversely, the share of young adults living with their parents has continued to grow despite the end of the recession four years ago.

This analysis is based upon both the 2000 Decennial Census and the 2005-2011 American Community Surveys, which are conducted annually. Both of these datasets produce nationally representative estimates of the U.S. population.

The data were obtained from the Integrated Public Use Microdata database (IPUMS), provided by the University of Minnesota. Further information about the IPUMS is available at www.ipums.org.

Grandparent co-resider: any adult who is living in the same household as at least one minor grandchild

Grandparent caregiver: a grandparent co-resider who reports being “currently responsible for most of the basic needs of” a minor co-resident grandchild

Race: All whites, blacks and Asians are non-Hispanic. Hispanics can be of any race

Next: Children Living with or Being Cared for by a Grandparent
← Prev Page
You are reading page1Page2Page3Page4
Next Page →