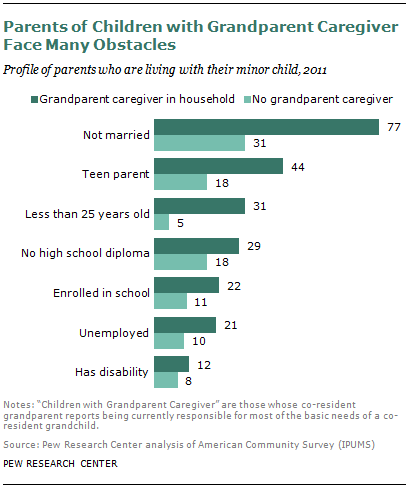 On most measures, parents who are living with their minor children while their children are being cared for primarily by a grandparent are disadvantaged, compared with parents who are living with their minor children and no grandparent caregiver. For instance, in households where the grandparent is the primary caregiver for the child, 44% of the parents gave birth as a teen, and 31% of the parents are under the age of 25.9 In households with no grandparent caregiver, just 18% have a parent who was a teen parent, and 5% include a parent under the age of 25.

And while 77% of parents in households with grandparent caregivers are unmarried, this number is just 31% among parents in other households.

Next: Grandparents Living with or Serving as Primary Caregivers for their Grandchildren
← Prev Page
Page1Page2You are reading page3Page4
Next Page →