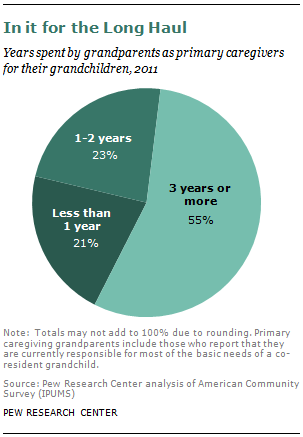 All told, more than 2.7 million grandparents not only live with a grandchild, but also serve as the primary caregiver to that child. This marks a 12% increase from 2000, and most of that increase occurred since the onset of the recession in 2007. From 2007 to 2008, the number of grandparent caregivers grew by 5%; from 2008 to 2009, the number grew 3%. Since that time, the number of caregiving grandparents has declined slightly. 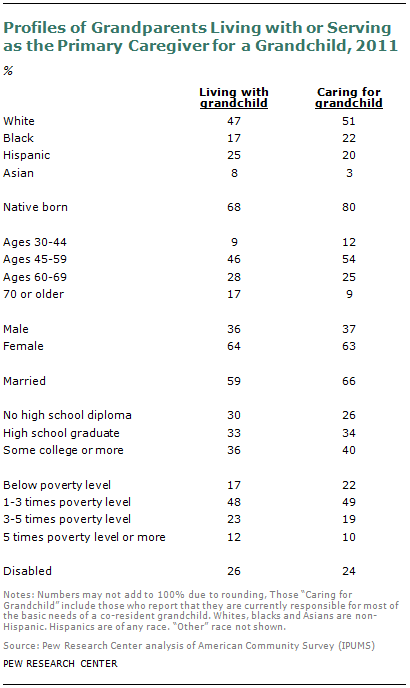 Almost two-thirds (64%) of grandparents who are living with their grandchildren are women, and 36% are men. As with co-residers, the majority (63%) of grandparent caregivers are grandmothers, as opposed to grandfathers. In contrast, 46% of the population ages 50 and older is male, and just 54% is female.

About one-fourth of both grandparent co-residers (26%) and grandparent caregivers (24%) report that they are dealing with a significant disability of some kind. These rates are very similar to the rate among the general population ages 50 and older (26%).

Profiles of Grandparents who Are Living with or Primary Caregivers for their Grandchildren, by Race and Ethnicity 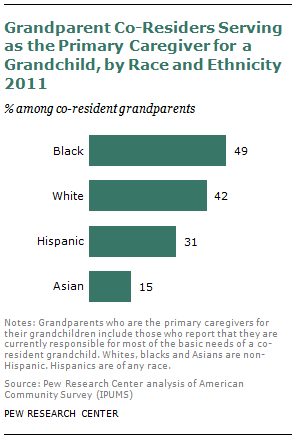 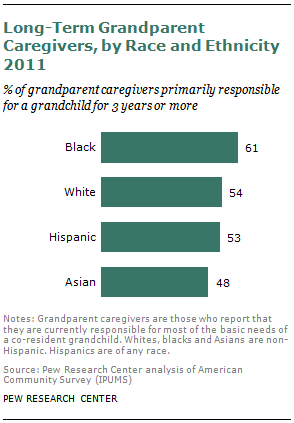 The share of women who are co-residers or caregivers is markedly higher for blacks than for the other groups. Fully 73% of black co-residing grandparents are female, while the share among the other racial and ethnic groups ranges from 61% to 63%. And the composition of grandparent caregivers is almost exactly the same—72% of black caregivers are women, while the share that is female is 59% to 62% among the other racial and ethnic groups.

African American co-residers and caregivers are also much less likely to be married than other racial and ethnic groups—this is reflective of the low marriage rates in the African American community in general. Some 43% of black grandparent co-residers are married, compared with 61% of whites, 62% of Hispanics and 68% of Asians. The results are more dramatic among caregivers. While less than half (48%) of blacks are married, 70% of Hispanics are, as are 73% of whites and 74% of Asians. 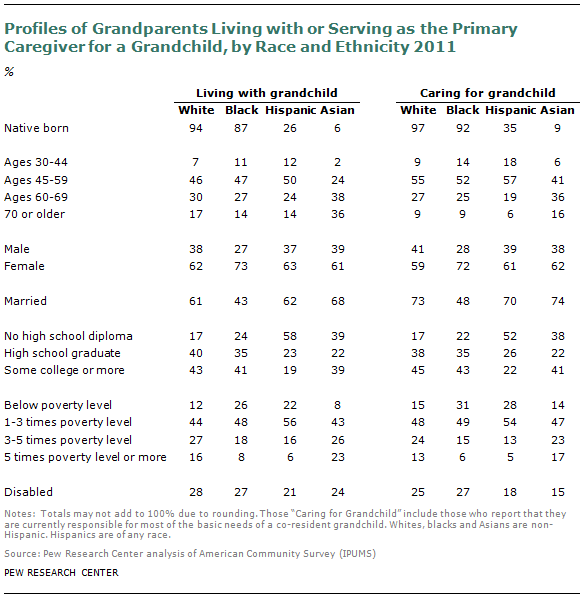