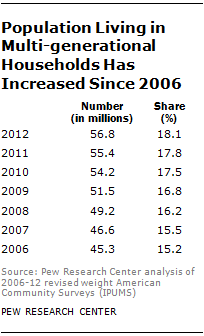 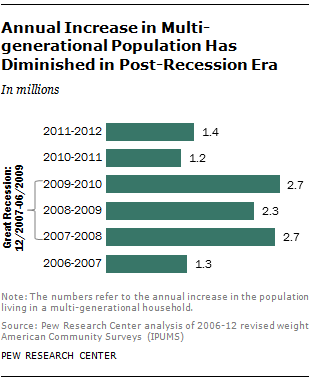 A number of factors likely contributed to the decreased tendency for the elderly to live with adult children early in the century. Marked improvements in the health of the elderly diminished infirmity and boosted their capacity to live independently. Rising incomes and the establishment of Social Security and private pensions greatly increased the financial well-being of older adults, enabling the elderly to afford privacy and independent living (McGarry and Schoeni, 2000).

In addition to rising affluence, demographic factors played a role. Fertility declined substantially during the 1900s, reducing the number of children with whom elderly parents could potentially reside (Schoeni, 1998). And economic opportunities, with the transformation of the economy from an agrarian to an industrial basis, led many adult children to leave the family home and seek opportunities in the emerging labor market (Ruggles, 2007).

Since immigrants are more likely than U.S.-born Americans to live with multiple generations in the home, there is little doubt that some of the growth in multi-generational living is due to the third great wave of immigration that commenced with the passage of the Immigration and Nationality Act of 1965. Since 1980, the share of households headed by an immigrant has doubled (from 7% to 14% in 2012). In 2009, 16% of households headed by an immigrant were multi-generational, compared with 10% of households with a U.S.-born head.