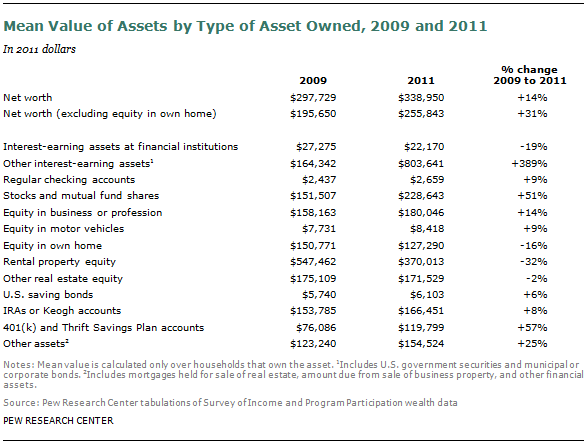 The Census Bureau reports the average value for specific assets among the households that own that specific asset. Very large gains in average holdings were reported for specific categories of financial assets. For example, the average value of 401(k) and Thrift Savings Plan accounts rose 57% from 2009 ($76,086) to 2011 ($119,799). The mean value of directly owned stocks and mutual funds rose 51% from 2009 to 2011. Among households owning assets in the category of “other interest-earning assets,” or direct owners of government securities or municipal and corporate bonds, the average holdings of those securities and bonds rose nearly fivefold from 2009 ($164,342) to 2011 ($803,641). 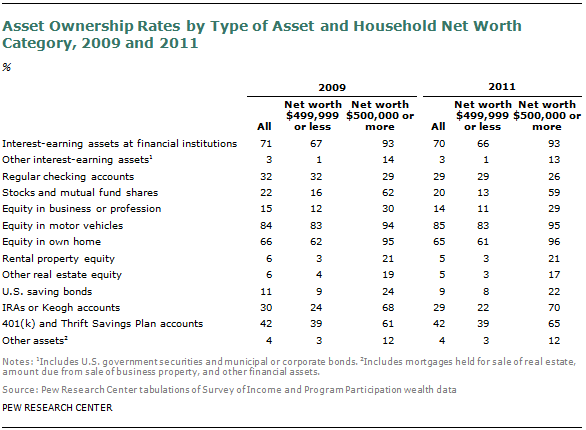 Average gains in other important asset categories paled by comparison. Reflecting the decline in house values nationally from 2009 to 2011, average equity in one’s own home fell 16%. The mean value of rental properties tumbled 32% from 2009 to 2011, and the value of “other real estate equity” (vacation homes and other real estate) declined 2%. Most households (70%) own an interest-bearing account at a bank or other financial institution, such as a certificate of deposit, savings account or money market deposit account. The average value of these accounts fell 19% from 2009 ($27,275) to 2011 ($22,170). 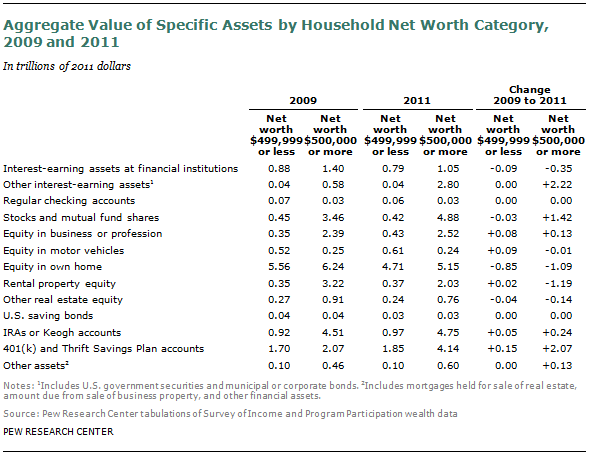 By contrast, the asset classes that experienced declines since 2009 were more widely held and thus the decline in value was not solely concentrated among households with at least $500,000 in net worth. For example, equity in own home tumbled $1.9 trillion from 2009 to 2011, but equity in own home among high net worth households declined only $1.1 trillion.

Next: Chapter 3: Background on Changes in Major Asset Prices from 2009 to 2011
← Prev Page
Page1Page2You are reading page3Page4Page5Page6Page7
Next Page →

A Rise in Wealth for the Wealthy; Declines for the Lower 93% Chapter 1: The Uneven Wealth Recovery Among the Nation's Households
Chapter 2: Explaining the Differential Wealth Recovery
Chapter 3: Background on Changes in Major Asset Prices from 2009 to 2011 Chapter 4: Comparison of the Census Wealth Tabulations to the Fed's Flow of Funds Net Worth Data References Appendix 1: Census Wealth and Asset Ownership Data