The Federal Reserve Bank measures household wealth in a somewhat different way than does the U.S. Census Bureau, but its reports provide corroboration of the picture emerging from recently released Census wealth tabulations. As with the Census Bureau data, the Fed data show that all of the growth in aggregate wealth from 2009 to 2011 can be accounted for by the increase in the value of financial assets. 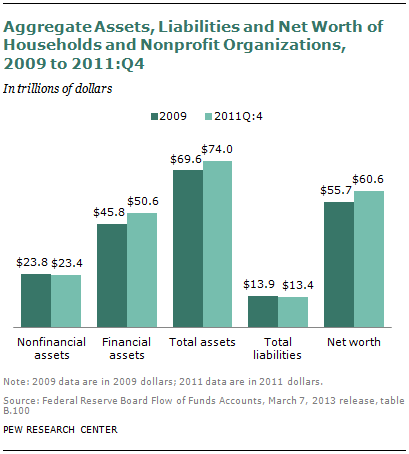 There are a number of differences between the Federal Reserve data and the Census Bureau tabulations. Among these differences, the Fed data refer to the assets and liabilities owned by the nation’s nonprofit organizations as well as households. In addition, they are in nominal dollars and not adjusted for inflation.

However, as with the Census data, the Fed data show a rise in wealth from 2009 to the fourth quarter of 2011. Likewise, the Fed data indicate that most of the growth in the nation’s wealth during that period was due to an increase in the value of financial assets. From 2009 to the fourth quarter of 2011, financial assets increased in value by $4.8 trillion (from $45.8 trillion to $50.6 trillion), accounting for nearly all of the $4.9 trillion increase in the nation’s net worth of households and nonprofit organizations.

Next: References
← Prev Page
Page1Page2Page3Page4You are reading page5Page6Page7
Next Page →

A Rise in Wealth for the Wealthy; Declines for the Lower 93% Chapter 1: The Uneven Wealth Recovery Among the Nation's Households Chapter 2: Explaining the Differential Wealth Recovery Chapter 3: Background on Changes in Major Asset Prices from 2009 to 2011
Chapter 4: Comparison of the Census Wealth Tabulations to the Fed's Flow of Funds Net Worth Data
References Appendix 1: Census Wealth and Asset Ownership Data