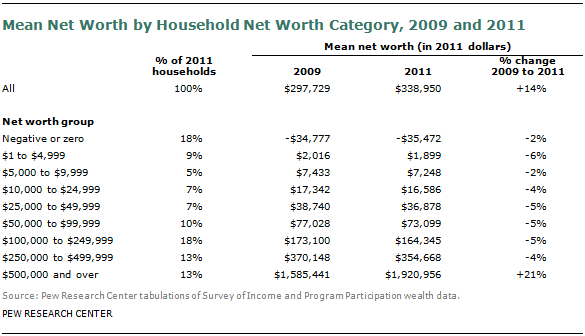 These wealth statistics do not imply that all households with a net worth below $500,000 lost wealth from 2009 to 2011. There were no doubt some gainers. But the decline in mean net worth means that the losses of the losers trumped the gains of the gainers.

In both 2009 and 2011 about 13.5% of households had a net worth of at least $500,000. However, even though the category had the same number of households in both years, some individual households moved up into the category during the period under study, and some fell out. This is true for all the wealth categories shown above.5

The Changing Distribution of Household Wealth 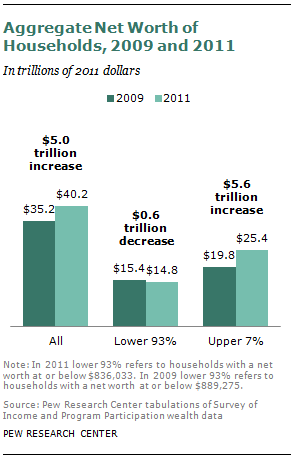 A Rise in Wealth for the Wealthy; Declines for the Lower 93%
Chapter 1: The Uneven Wealth Recovery Among the Nation's Households
High Net Worth HouseholdsThe Changing Distribution of Household Wealth
Chapter 2: Explaining the Differential Wealth Recovery Chapter 3: Background on Changes in Major Asset Prices from 2009 to 2011 Chapter 4: Comparison of the Census Wealth Tabulations to the Fed's Flow of Funds Net Worth Data References Appendix 1: Census Wealth and Asset Ownership Data