The nation began its recovery from the Great Recession in June 2009. From mid-2009 until the end of 2011, the price or value of major classes of assets has not followed a uniform trajectory.8 Generally prices in bond and equity markets have risen significantly since the beginning of the economic recovery, while national home prices continued to decline. 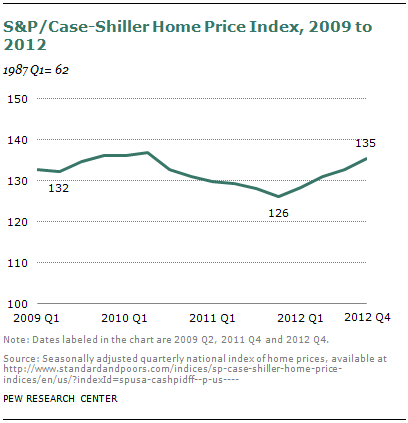 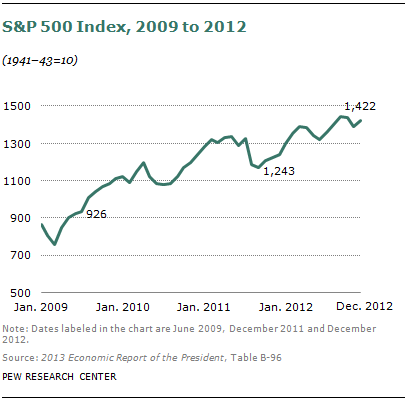 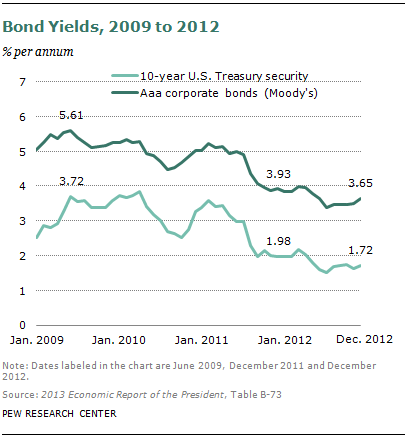 Although the particulars depend on the particular asset and term, from June 2009 until December 2011 fixed income markets performed at least as well as equity markets. As a rule of thumb, the prices of bonds move inversely with the yield or interest rate on the bond. Interest rates declined substantially from June 2009 to December 2011. For example, the yield on the 10-year U.S. Treasury security over this period fell 1.74 percentage points, or 174 basis points (from 3.72% to 1.98%). That represents a 47% decline in the rate and an equivalent gain in the price of the security. Alternatively, we can investigate rates in the corporate bond market. From June 2009 to December 2011, the Aaa corporate bond rate fell 168 basis points (from 5.61% to 3.93%), representing a 30% decline in the rate and a 30% appreciation in the value of corporate bonds. U.S. bond yields fell further over the course of 2012.

Next: Chapter 4: Comparison of the Census Wealth Tabulations to the Fed's Flow of Funds Net Worth Data
← Prev Page
Page1Page2Page3You are reading page4Page5Page6Page7
Next Page →

A Rise in Wealth for the Wealthy; Declines for the Lower 93% Chapter 1: The Uneven Wealth Recovery Among the Nation's Households Chapter 2: Explaining the Differential Wealth Recovery
Chapter 3: Background on Changes in Major Asset Prices from 2009 to 2011
Home PricesStock PricesSecurity and Bond Prices
Chapter 4: Comparison of the Census Wealth Tabulations to the Fed's Flow of Funds Net Worth Data References Appendix 1: Census Wealth and Asset Ownership Data