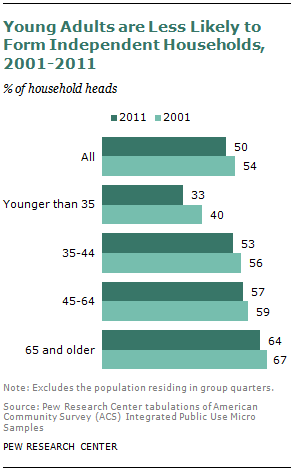 The tendency of young adults to not form independent households increased over the past decade. Focusing in this section of the report on the outcomes of adults, rather than households, Census data reveal the “headship rate” or basically the number of households per person. Adults are forming fewer households or, alternatively, the number of adults per household has increased. In 2001 there were 54 households among every 100 adults. By 2011, 100 adults resided in 50 households.

Adults of all ages, but especially young adults, are less likely to “launch” and form independent households since 2001.

That young adults are less likely to form independent households does not necessarily imply that they are staying at home and residing with parents or other relatives. Alternatively, it could represent an increase in “doubling-up” and simply living with either housemates or as a boarder. An appendix shows that, over the decade, adults were more likely to reside with kin (other than a spouse or unmarried partner) as well as with roommates or to live as boarders. Adults of all ages were more likely to live with kin, but the tendency was pronounced among young adults.