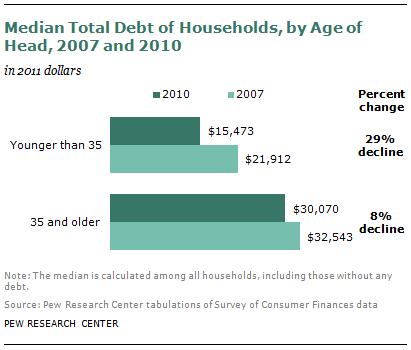 After running up record debt-to-income ratios during the bubble economy of the 2000s, young adults shed substantially more debt than older adults did during the Great Recession and its immediate aftermath—mainly by virtue of owning fewer houses and cars, according to a new Pew Research Center analysis of Federal Reserve Board and other government data. 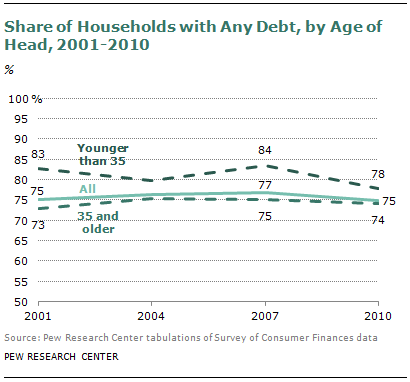 From 2007 to 2010, the median debt of households headed by an adult younger than 35 fell by 29%, compared with a decline of just 8% among households headed by adults ages 35 and older. Also, the share of younger households holding debt of any kind fell to 78%, the lowest level since the government began collecting such data in 1983.

Debt reduction among young adults during bad economic times has been driven mainly by the shrinking share who own homes and cars, but it also reflects a significant decline in the share who are carrying credit card debt, from 48% in 2007 to 39% in 2010.

These shifts in the debt profile of younger adults reflect a broader societal shift toward delayed marriage and household formation that has been under way for decades. This report analyzes the patterns of debt holding and asset ownership among younger households over time.1 Here are its key findings: 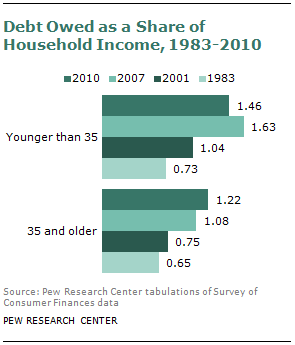 One way to measure a household’s financial well-being is its debt-to-income ratio, which compares total outstanding debt to annual income. As the figure to the right indicates, the debt-to-income ratio of younger adult households more than doubled from 1983 to 2007, when it peaked at 1.63. By 2010 it had fallen back to 1.46. By contrast, the ratio among older households continued rise through this entire period. As of 2010 it has risen to 1.22, still below that of younger households. 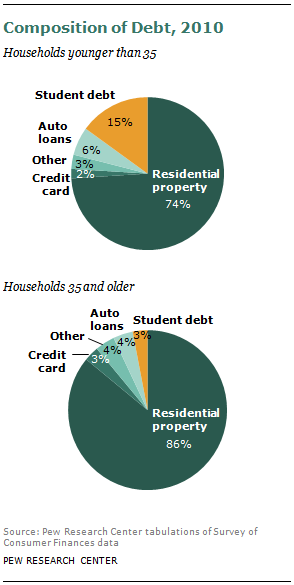 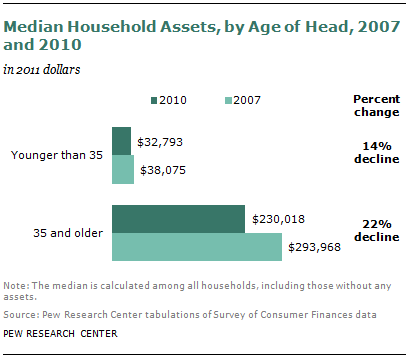 Younger and older adults both saw their median household assets – which includes homes, cars and other durable goods, plus all financial assets such as savings accounts and stock holding — decline from 2007 to 2010. Older adults have many times more assets overall than younger adults, and they suffered steeper asset declines during this period – a 22% drop, compared with 14% among younger adults. One reason for the difference is that older adults have more of their assets in financial holdings, and stock market valuations took a steep downturn from 2007 to 2010. Since then, the stock market has regained virtually of all its losses, while the housing market in most of the country has remained well below its historic peak.

With the exception of Chapter 2, the focus of the report is on the characteristics of households, classified by the age of the head of the household. Most data on homeownership and vehicle ownership, as well as liabilities, are organized around what the household owns, not what the individual owns.

The analysis of household debts utilizes the Federal Reserve Board’s Survey of Consumer Finances; 2010 is the most recent year available. The homeownership tallies are based on the American Community Survey. Vehicle ownership relies on the Consumer Expenditure Survey. The analysis of recent mover households uses the American Housing Survey. These surveys are described in greater detail in Appendix B.

The report emphasizes trends in indebtedness and acquisition at the time points of 2001, 2010 or 2011, and occasionally 1983. To some extent the choice of time periods reflects data availability. However, the time periods are desirable due to the fact that they are roughly comparable points in the business cycle. Business cycle troughs occurred in November 1982, November 2001 and June 2009, according to the National Bureau of Economic Research. So the 1983 and 2001 periods occurred at the close of recessions. Admittedly, 2010 and 2011 occurred during a cyclical upswing, but many observers assess the recovery as less than vigorous. For example, the for-sale housing market continued to be depressed through much of 2011 (Joint Center for Housing Studies, 2012).The 2007 time point was near a cyclical peak as the National Bureau of Economic Research dates the peak at December 2007.

Dollar amounts are adjusted for inflation and reported in 2011 dollars. The inflation adjustment utilizes the Bureau of Labor Statistics’ Consumer Price Index Research Series (CPI-U-RS) as published in DeNavas-Walt, Proctor and Smith (2012). This is the price index series used by the U.S. Census Bureau to deflate the data it publishes on household income.

This report was written by senior economist Richard Fry. Paul Taylor, executive vice president of the Pew Research Center, assisted the writing of the overview and provided guidance on the scope of the project. Research assistant Eileen Patten provided expert assistance with the preparation of charts and formatting the report. Patten and research assistant Ana Gonzalez-Barrera number-checked the report. It was copy-edited by Marcia Kramer.

Next: Chapter 1: The Changing Financial Mileposts of Young Adults
← Prev Page
You are reading page1Page2Page3Page4Page5Page6Page7Page8Page9Page10
Next Page →

Economics and Personal FinancesHousehold and Family StructureEconomic RecessionLifestyleWealthMillennialsBusiness and LaborHomeownership
Jewish Americans in 2020
Defining generations: Where Millennials end and Generation Z begins
Immigration was a top focus of early Biden coverage, especially among outlets with right-leaning audiences
What We Know About Gen Z So Far
10 key findings about Jewish Americans